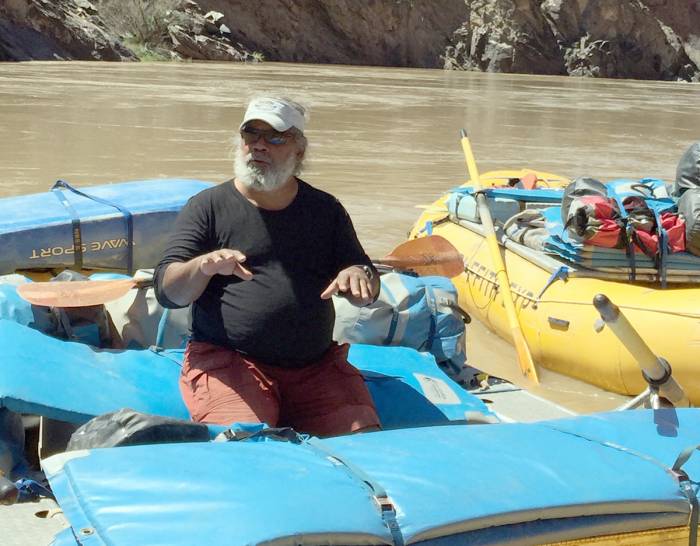 Then Jose asks us to stop talking so he can think. He needs to position our raft to avoid the Skull Rapid eddy called the Room of Doom. This an apt moniker given its reputation for trapping the dead in its spiraling snare.

Westwater Canyon is a 17-mile stretch of the Colorado River on the eastern edge of Utah. It’s the best short whitewater trip perhaps anywhere, at least anywhere west of the Gauley River in West Virginia. 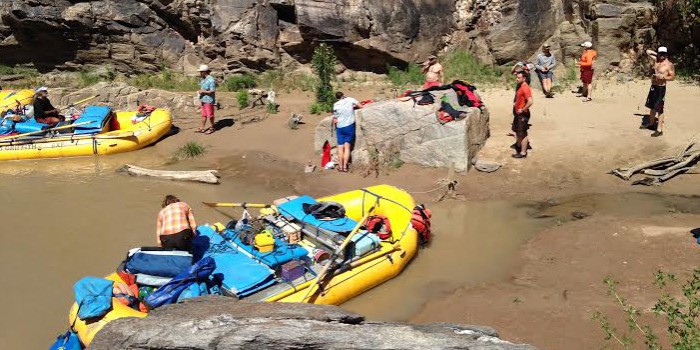 The raft trip with Jose with his company, Sheri Griffith Expeditions, was the testing ground for a new type of shoe from Chaco, the OutCross Evo 2. 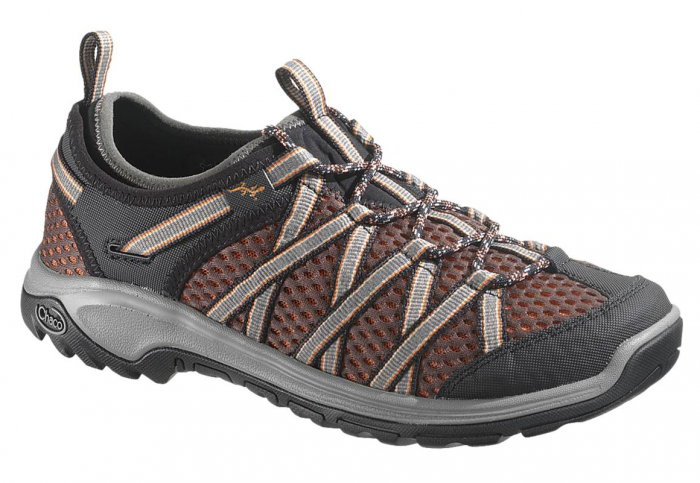 The OutCross Evo2 ($110) is a performance trail shoe with a twist. The stretch collar and neoprene lining are designed for trail to water and back. Chaco has a legit river heritage, so it’s fitting that this trail shoe is a sock-optional water shoe as well.

While traveling down the river, we found opportunities to put the shoes to the test both on and off the water. 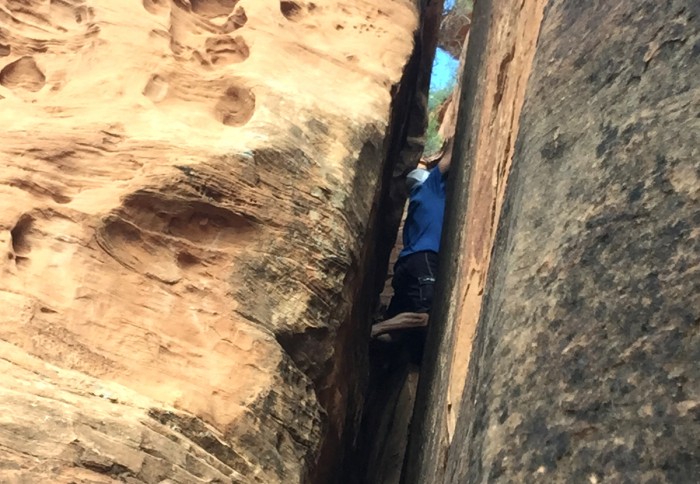 Chaco has worked to advance the traction of its rubber compound and we need all the traction we could get to climb this body-jam sized chimney.

The OutCross gripped well as we climbed this crack (above), which was the only route we could find up to the top of this mesa. The skin we left between the cold sandstone was worth it — the views of the canyon were superb. 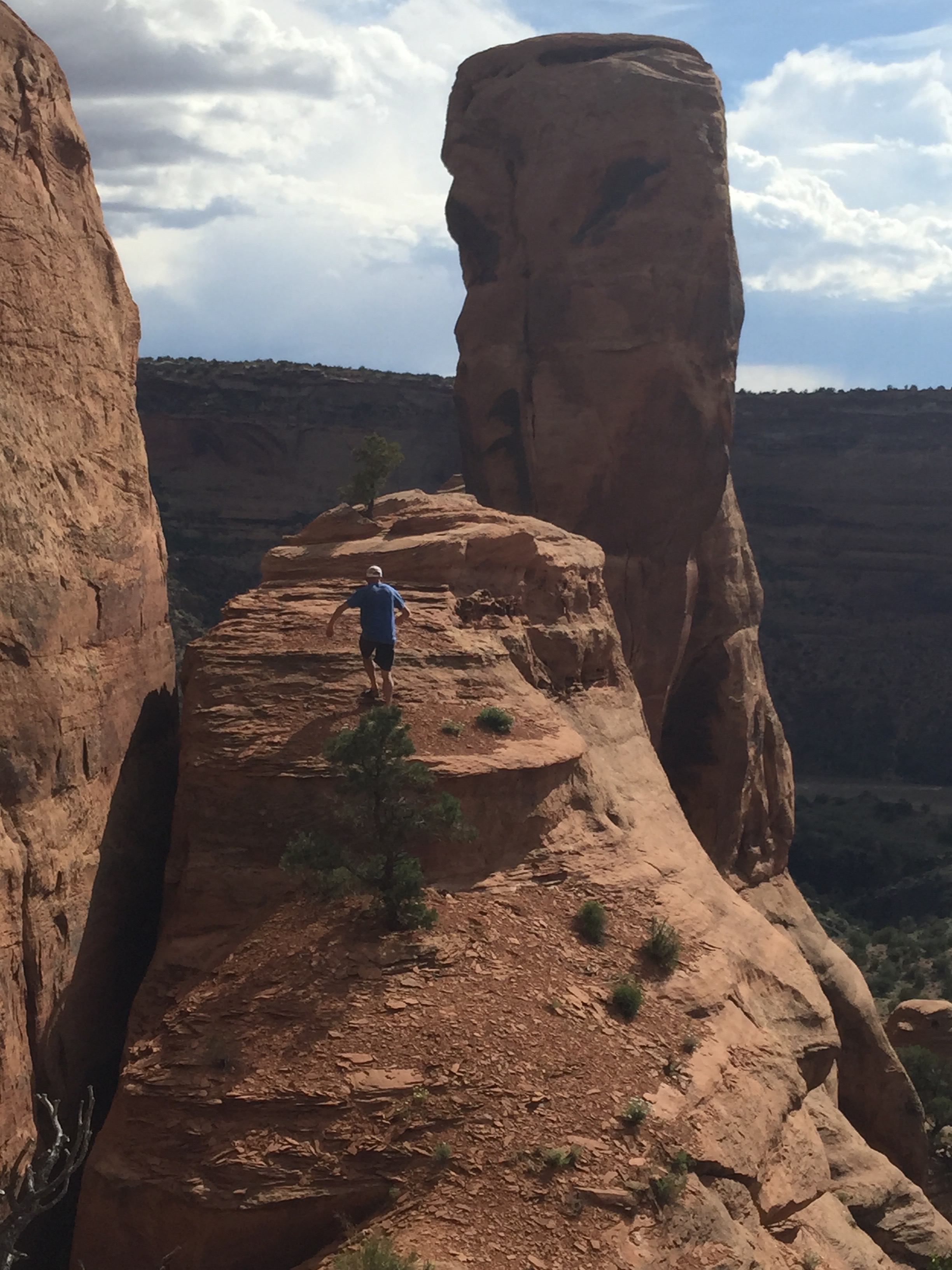 The rubber is not quite as grippy as the best Vibram rubber on dry rock, Chaco admits, but its traction when wet is vastly superior. It makes an excellent paddle-boarding shoe.

SUP boarding on the Colorado River is much better than near the GearJunkie office, on the flat lake water of Minnesota.

We found the shoes to be comfortable out of the box and true to size. Width is standard and accommodates slightly wider feet. They felt light and agile underfoot despite their stout rubber outsole and Chaco’s well-regarded “LUVSEAT” midsole.

The shoe is easy to put on with its pull-tab heel. The heel is collapsable if you are the type that likes to step into them for a quick jaunt.

The shoe’s comfort allowed us to forget we were testing new shoes. We had more interesting things to do than tend to our feet.

Jose taught us about the native cultures that were shaped in and around the great Colorado River. He explained the geological contrast of the red Windgate Sandstone above the black Granitic Schist.

Around the campfire the moon dipped below the horizon, the stars sat brightly atop the ridge line, and Jose continued to teach and answer questions.

I asked him if guiding a group of young, strong gear testers was fun for him. He gave an answer that caught me by surprise:

“No. Sometimes I guide disadvantaged kids who have never been outside. They have no idea what they are doing. I can open up the world to them. That is what is really fun for me.”

We often take for granted the opportunity to get outside and explore the trails and the water. Sharing it is Jose’s calling. He reminded us why it’s important to stop and appreciate the outdoors — its danger and its beauty.

Up Next: Man Attempting SUP Circumnavigation Of Lake Superior