With its retooled MIPS design, the Giro Aether promises improved safety. But it would be a shame to crash in a helmet this sexy.

Yes, you should wear a helmet. It might not save you from the worst types of collisions, but a helmet shines during all the unexpected mishaps while you’re traveling faster than you can run.

Often, though, style and comfort are left out of the equation. That is, until this week.

Giro just unveiled the Aether — a helmet it claims provides “revolutionary” improvements to safety thanks to a redesigned MIPS system. This “ball-and-socket” technology reduces rotational forces.

And while that’s great news, the new technology helped Giro pack the head-pampering MIPS tech into a skull bucket that also looks sleek.

MIPS accomplishes this by allowing the outer helmet casing some freedom to rotate against the inner protective foam shell. That leeway gobbles up some of the rotational energy of an impact, improving your brain’s odds of a happy outcome.

With the Aether, Giro claims a “revolution in rotational energy management.” According to the brand, the Aether improves on traditional MIPS technology by eliminating a plastic “slip plane.”

Historically, that plastic sheet (yellow, above left) served as the foundation of MIPS. Because manufacturers usually incorporated it into existing helmet designs, it compromised some comfort, breathability, and weight — kind of like adding an insole to a shoe.

Plus, removing the plastic liner also allows Giro to create deeper, wider ventilation channels. The result is a helmet Giro and MIPS claim is both safer and more comfortable.

Perhaps most impressive is how well Giro executed the style of the Aether. The outer shell comprises six pieces, resulting in relatively massive air channels along the length of the helmet.

While this looks like it will keep riders cool and reduce the overall helmet feel, the Aether also maintains a low profile. Instead of a helmet that bulges out in the back and along the temples, the Aether wraps around the head and contours to create a more natural-looking silhouette.

It still looks like a helmet, to be sure. But at first glance, the Aether appears to be more breathable, less bulky, and overall better looking. And if it provides even better injury prevention, Giro might not be overstepping when it says the Aether is “the future of cycling head protection.” 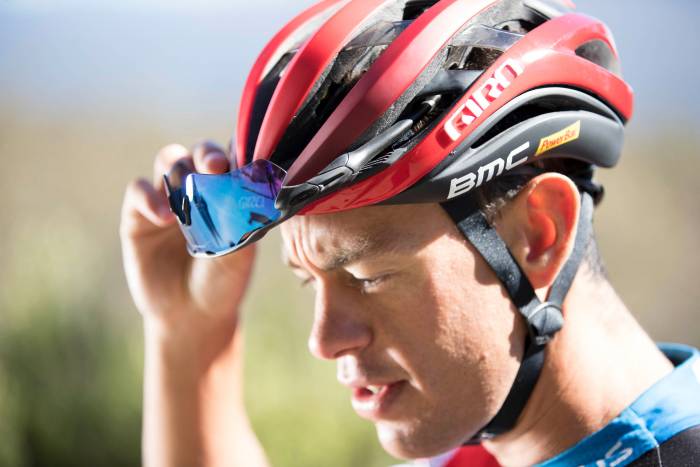 The Aether hits retail stores on Aug. 1 for a steep $325. Giro advertises it at 250 grams, placing it squarely in the lightweight helmet market. Look for a full review on fit and feel soon.

Up Next: Buy a Month of Mindful Running for Just $4