The waterproof and shock-resistant GNARBOX backs up image and video files and turns your mobile phone or tablet into a comprehensive editing system. 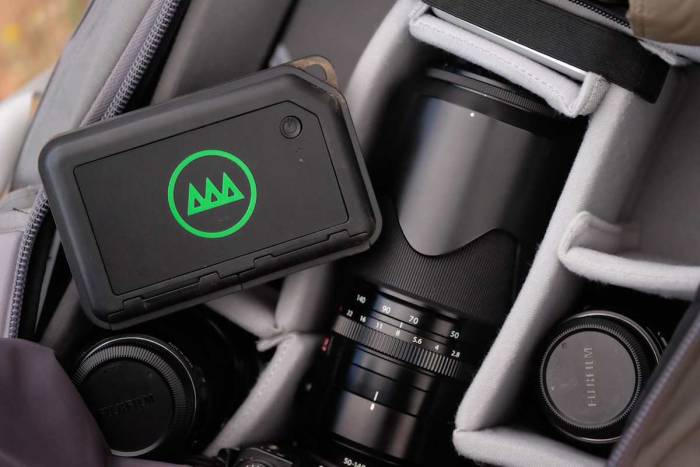 With the proliferation of small cameras, GoPros, and drones, recording our outdoor experiences has become as important as creating them. When GNARBOX started selling its ruggedized backup and editing system last year, I was quick to add one to my camera bag. Now I won’t leave home without it.

This month, the brand released an upgraded unit with double the memory storage.

You could be forgiven for assuming the GNARBOX is just another portable hard drive packaged in a fancy box. But beneath the IP67 waterproof, shock-resistant case lies a sophisticated hardware and software system.

Capable of storing 256GB of image and video files, GNARBOX’s real magic is its advanced editing app. When connected via WiFi to an iOS or Android phone or tablet, users can view and edit digital assets with a simple swipe or tap.

The high-powered system can process RAW and jpeg photos. It can even color grade and stitch together 4K video clips, complete with background music.

It can be intimidating to learn a new device, but GNARBOX provides multiple levels of guidance. Well-written manuals, tutorial videos, and helpful pop-up windows guide users through the editing features. The unit even comes pre-loaded with sample files so you don’t have to experiment with your own media.

Actuate most of the editing functions with a few clearly marked and familiar buttons and a slider bar. Although not as powerful as a computer-based editing suite, the GNARBOX app is capable of producing impressive videos relative to the small size and portability of the system.

Data In, Data Out

One of my favorite features of the file management system is the automatic arrangement of imported files by capture date instead of a randomly generated file number.

I have also been pleased with the transfer speed of 4GB per minute. This allows me to land my drone, backup and clear the memory card, then get back to flying and recording. Many variables influence actual transfer times, but I would qualify the write speed as sufficiently quick for field work.

Video and still-image editing requires significant computing power. The compact unit has a 1.92GHZ Intel Quad Core CPU with 2GB of RAM and a 4 Core Intel HD Graphics GPU. On a recent trip to the Amazon basin, I found the GNARBOX loaded clips and images slower than a laptop, particularly RAW files.

But it is isn’t a deal breaker. While there is some lag time when working with 4K video clips, it’s a compromise I’m willing to make to leave my laptop at home.

Given the unit’s big performance and small size, the 4,000mAh battery’s six-hour operating time between charges surprised me. The device clearly displays charge level as a percentage number within the app, much better than vague LED indicators.

The GNARBBOX interfaces with a host computer just like a standard portable hard drive. This allows users to offload their stored files directly to a home computer and into Photoshop or another editing suite.

Upload on the Go

Another convenient feature is the ability to wirelessly connect up to five mobile devices. Users can access their favorite videos and images and share them directly to social media channels.

There was a time when such tools didn’t exist, or if they did they were the playthings of professional photographers. Today’s outdoor enthusiasts are masters of media. The GNARBOX ensures they not only protect their recorded adventures but also put them to maximum use.

The new 256GB GNARBOX is currently available on Android and sells for $399.

Fueled by his personal mantra––the Earth is cool––Christophe Noel has dedicated his life to exploring as much of it as he can. His words and images have appeared in a number of print and digital publications as well as manufacturer websites, catalogs, and ad campaigns. When not tapping away at a keyboard as a freelance journalist, or looking through the clear glass of a camera lens, he can be found riding bicycles, motorcycles, or shuffling through an airport on route to his next adventure. www.christophenoel.net