Throughout many hunting dog and retriever training programs, the training dummy — also known as a dog bumper — serves as a vital piece of equipment in preparing gun dogs for field trials, hunting seasons, and obedience work.

Not just for the pros, any gun dog owner can use dog bumpers to improve their dog’s training abilities. They can be used to reinforce learned skills, or just to play fetch and burn off some extra energy. These useful dummies come in a choice of shapes, colors, and sizes that range from fowl-like replicas to cylindrical tubes.

Companies put extensive research and product testing into the development and design of dog bumpers. While it may appear like a simple task, choosing the right dog bumpers can greatly improve a dog’s training progression from puppyhood to a master hunter.

Here are four dog bumpers with different use cases that can help complete your training program. 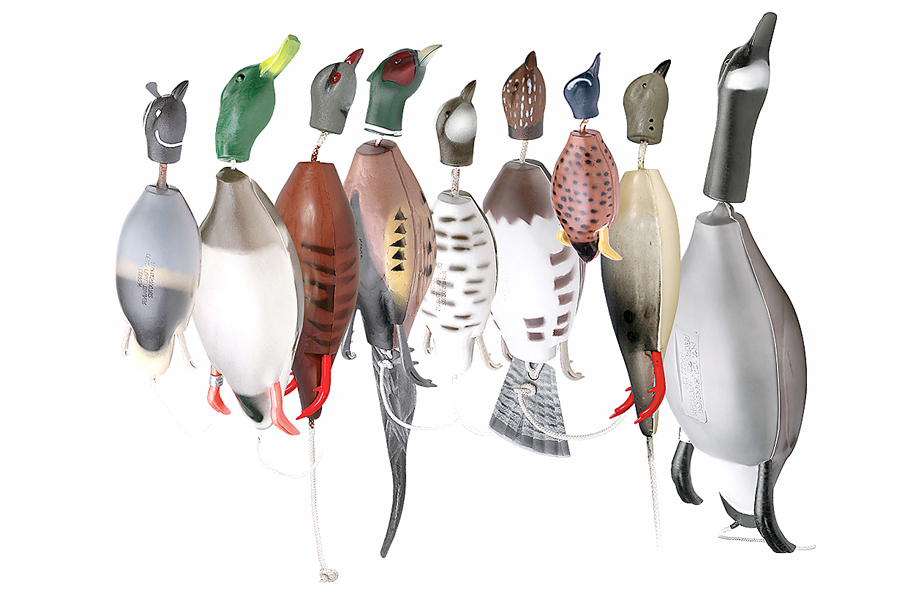 Use: Great for reinforcing the proper hold position of retrieved game and helpful to replicate retrieving both small and large birds, especially geese.

Dokken Dog Supply — named after the famed trainer Tom Dokken — makes the innovative DeadFowl Trainer. These realistic training bumpers were developed and patented to include a hard head and feet but a soft body, which helps young dogs learn to properly hold retrieved birds by the bumper’s foam center.

In addition, the hard, free-swinging ends of the DeadFowl Trainer discourage a dog from shaking the bumper around in its mouth, an undesirable trait that often begins during puppyhood. The DeadFowl Trainer comes in a variety of sizes to use with dogs of any age.

In addition, many trainers and enthusiasts enjoy using the DeadFowl Trainer because the color schemes and designs mirror various waterfowl and upland species. The DeadFowl Trainer can be used on both land and water, and the foam center can be injected with DeadFowl Scents to add realistic smells throughout training sessions.

Each DeadFowl Trainer has an internally attached rope that allows for a controlled throw, with an optional black power throw grip for those who want to extend the training marks.

After the first session with a Dokken DeadFowl Trainer, it’s easy to understand the benefits of this intuitive design. It is impressive to see how a dog instinctively picks up the bumper by the foam body instead of the hard head or feet.

Dokken Dog Supply also has a series of launcher dummies to add distance to training scenarios, in addition to diver dummies to train dogs that will hunt diver ducks. 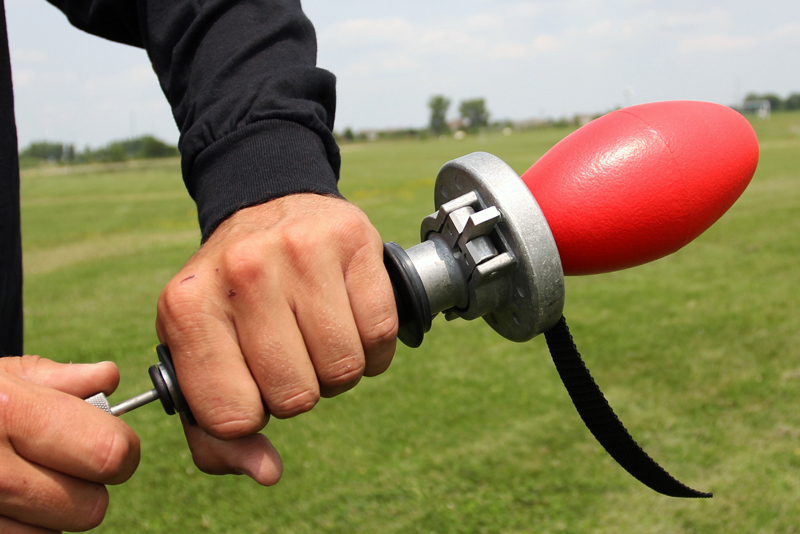 Use: Launcher dummies are a great way to add distance and remote work to your setup on both land and water, as well as adding realistic gun sounds.

Retriev-R-Trainer, a company founded in 1965, offers an impressive line of dog launchers. These launchers include its revolutionary Versa-Launcher Remote Launcher, Lucky Launcher II, and RRT Hand Launcher ($85), which go alongside its assortment of dog bumpers.

When working alone or with others, these launchers improve realism by adding the sound of gunfire while also adding distance to your training setups. The RRT launchers propel the RRT canvas and plastic dummies onto both land and into the water, mimicking the flight of falling fowl.

The RRT Launchers dummies come in three different categories: Canvas Bird, Canvas Launcher, and Plastic Launcher. The Canvas Bird Dummies feature a realistic fowl head with canvas wings and tail feathers in two designs. The Clone is brown and tan, and the black-and-white Strobe is designed to flash in the air.

The Canvas Launcher Dummies are cylinder-shaped and coated with a water and moisture-resistant fabric. In addition, these Canvas Launcher dummies come in an assortment of eye-catching colors, as well as a 10-inch design for long marks used with the Versa-Launcher.

RRT’s Plastic Launcher Dummies are made of dense foam covered in a PVC skin. The latter adds a water-resistant surface.

The launchers are made from closed-cell foam, which keeps the canvas bumpers from becoming saturated with water. Plus, the design of the launcher dummies does not tear, is mold-resistant, and has a durable aluminum center.

RRT also makes throw dummies to go alongside the launcher dummies that come in both a firehose cork line and canvas puppy throw line.

These throw bumpers feature a ground-breaking granule fill that gives a fowl-like impression when in a dog’s mouth but also maintains its shape. Both the launcher and throw dummies have a realistic weight, similar to real birds. The canvas and plastic dummies are very sturdy and repel water effectively throughout multiple retrieves. 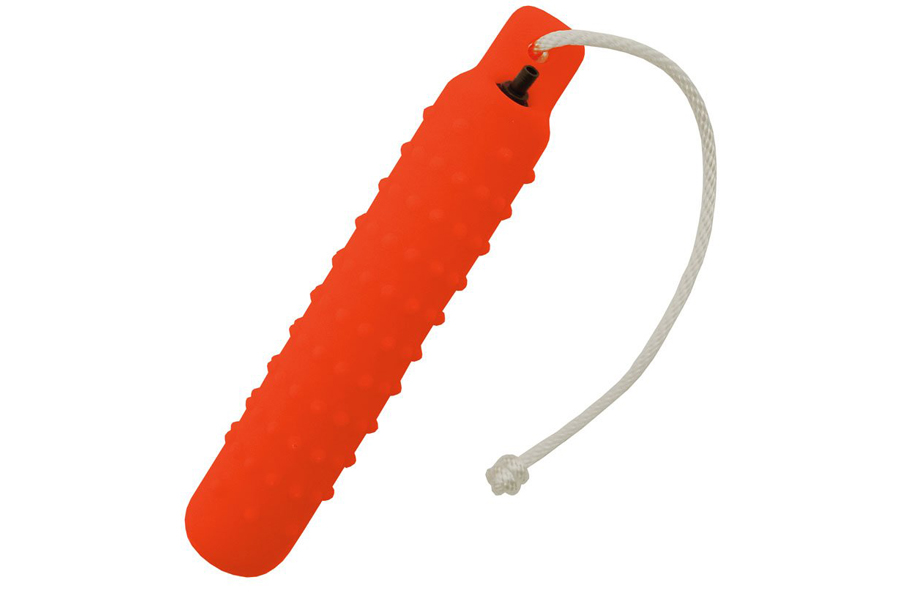 Use: Affordable and durable dummies that are great for pile work.

SportDOG is known for its top-rated E-Collars and premier ProStaff. But the brand also makes an affordable set of dog bumpers that are durable and easy to clean.

The cylinder-shaped, BPA-free floating plastic dummies ($8) contain a valve that allows the user to adjust the buoyancy and weight, which can mimic the weight of small to large fowl.

In addition, each of the dummies contains knobs across the surface of the dummies to limit hard-mouth. (This term refers to dogs crushing or chewing on a bird during a retrieve.) These dummies come in both 2-inch and 3-inch versions and are white, orange, or a half black-and-white color.

The SportDOG dummies are a low-maintenance, low-cost addition to your dog training equipment loadout. While they do not come with a rope attached, there is a hole to add a knot.

These dummies are great to set out in piles for retriever work, including casting drills. As for durability, water and dog drool seem to slide right off these plastic bumpers.

SportDOG has an impressive roster of ProStaff, including Tom Dokken, who feature the SportDOG products and bumpers in many of their training programs and materials. 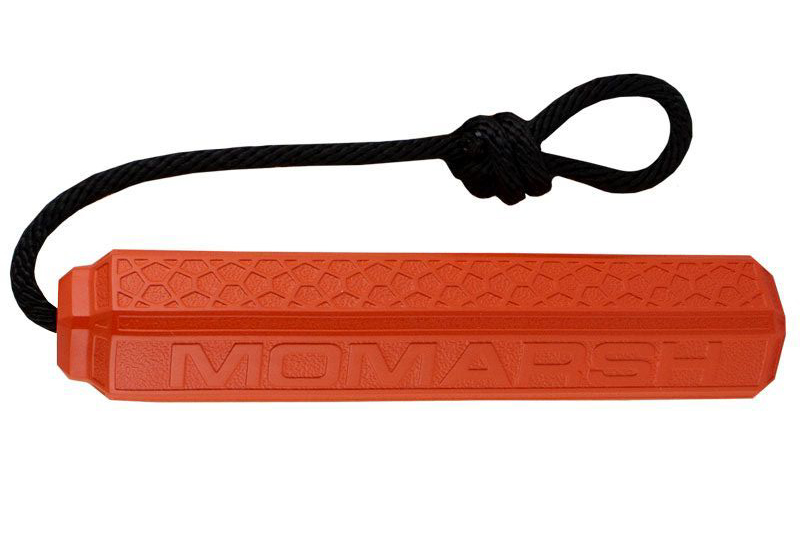 Use: Durable, heavy-duty bumpers great for training in harsh conditions.

MoMarsh is owned by Higdon Outdoors. And the maker of high-quality hunting dog products recently released its novel, pentagon-shaped MoMarsh Dog Training Bumper ($11). The bumpers were designed by veterinarians including Ira McCauley and with input from professional trainers like those at Habitat Flats Kennels.

These bumpers come in orange, white, and flash. The flash option is black and white, and it’s great for highly visible long marks. This impressive design encourages delivery from the dog’s mouth at the proper 45-degree angle. It’s also easily stackable for storage and transport.

The bumpers are made from tough but soft and buoyant EVA foam that floats, is tasteless, and is machine washable. The unique shape and design help the bumper float higher in the water for visibility. And the croc material on the pentagon face promotes a better grip.

The MoMarsh bumpers have the rope attached on the inside so that the main knot is not exposed. This streamlined look forces the dog to grab the bumper instead of the rope knot.

Each rope is black, which looks and stays clean. The pentagon shape is crucial during watermarks. It reduces the likelihood of a dog swallowing water retrieving long watermarks and blinds.

Overall, there are many different types of dog bumpers that can be utilized in all sorts of training scenarios. However, your choice in dog bumpers should be based on your training program, your dog’s age and skill, and your training environment.

Put simply, dummies are the name of the game when it comes to gun dog training — before you spend your time and money, make sure to get the right loadout for you and your gun dog.

Puppy Starter Kit: What to Buy to Prep for Your New Pup

Puppy preparation is the key to a happy and easy transition for both of you. Our puppy starter kit will help you and your pup focus on bonding rather than last-minute shopping trips. Read more…

The American Kennel Club's most popular dog is also the top sporting breed in the country. Here's what to know about labrador retrievers if you're considering adding one to your family. Read more…

Up Next: Bugging Out: Learn About Dry Fly Rises With Orvis’ Tom Rosenbauer

Saving…
Bugging Out: Learn About Dry Fly Rises With Orvis’ Tom Rosenbauer
Archers, Rejoice! Full Draw Film Tour Is Coming to a Town Near You
×