Cold, snowy winters push wildlife to the edge. And with people beginning to lace up their boots to hunt sheds, it’s important to take wildlife into consideration.

Dropped antlers have captured a following all their own. And shed hunting is now a vastly popular endeavor for the enterprising outdoors person. Some hunt sheds in pursuit of growing a private collection, others hunt to sell antlers.

Ready to get outdoors and explorer the spring woods? Shed hunting is a fun activity that can fill the shoulder-season void. Read more…

But shed hunters have been pushing the limits in recent years. Here, we examine what this means for the future of the practice.

The Value of Shed Hunting 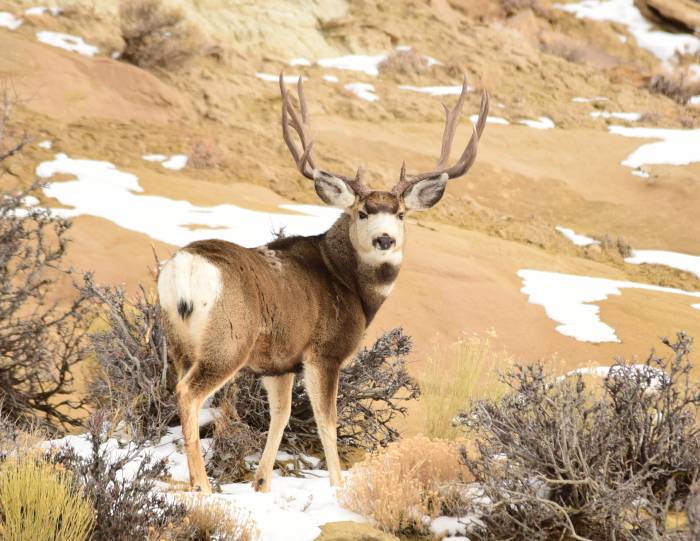 Antlers are the fastest-growing tissue on earth, and that regenerative tissue generates big business. Every year, cervids (including deer, elk, and moose) shed their antlers and grow a new pair. This pair often mirrors the previous, except the most recent antlers typically grow to a bigger size.

Some shed hunters not only have matched sets from the same animal — they’ve acquired these year after year. Matched sets with trophy scoring can command a pretty penny. A 400-inch set of matched elk antlers can begin at $1,000 for the pair. A single trophy whitetail shed can command $275. And beyond that, shed hunters can sell antlers by the pound, sometimes to the tune of a few hundred bucks per weighed antler.

Why buy antlers? They serve decorative functions, dog chews make up a huge bulk of the market, and bragging rights aren’t off the table, either.

Another aspect that drives people to shed hunt lies in early-season scouting opportunities for filling tags later in the year. Deer and elk shift their behavioral patterns across seasons, and shed hunting provides deeper insight into those habitual movements.

With sheds at a premium, people use all sorts of means to get an edge on the hunt for “white gold.” They scour the landscape on horseback, skis, ATVs, dirtbikes, mountain bikes, and more. They train their dogs to track sheds by smell. And they learn the landscape and the behavioral patterns of wildlife, thus developing their own secret spots primed for dropping antlers. Shed enthusiast and sportswoman Hannah Nikonow looks forward to shed hunting for a bevy of reasons.

“I love shed hunting because it’s a way to quiet my mind after a work day by studying the landscape, thinking about how wildlife are using the terrain, where they might have been feeding or bedding, and completely focusing in for an awesome treasure hunt,” Nikonow said.

This scouring of the landscape can be thorough and meticulous for the seasoned shed hunter. It also tends to happen in areas in which animals are quietly enduring the home stretch of winter.

Winter Stress and Our Wildlife 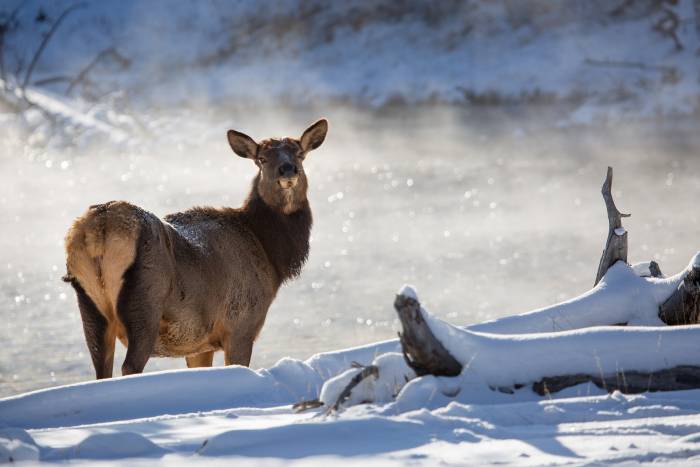 Winter stress is a real issue for all animals, year in and out. Survival, birth rates, and even newborn fawn survival have been shown to be negatively affected by stress experienced during winter months. And stress can be brought on by increased human activity, especially in these vital wintering areas.

This particular winter has been a tough one across the West and beyond, with tons of snow, flooding, and other issues on the landscape.

“Most years, I’ll start looking for them in early March. But this year we got some really good, big snows, so I’ll be holding off well into April,” Nikonow added. She’s one of a number of people who have pledged to put off the usual shed hunting season until conditions get better for winter-stressed animals. In addition, the Montana Department of Fish, Wildlife, and Parks has asked hunters to wait.

The Pressure Is On

“Respecting the resource” is a common turn of phrase within the conservation community, but it’s rarely been thought of or applied to the practice of shed hunting until recently. The boon has forced states like Colorado and Utah to regulate shed seasons more strictly in the spring months. Colorado’s shed season begins May 1, while Utah allows shed hunting from February 1 to April 15 if the shed hunter passes an online certification course on ethics. Outside of those protected periods, shed hunting does remain legal year-round.

Some states, like West Virginia, don’t allow shed hunting at all while others have limited (if any) regulation around shed hunting. Possession of antlers also has legal intricacies in each state, and the practice of picking up antlers still attached to skulls, or “deadheads,” carries its own legalities across the country. And picking up antlers within national parks and other protected areas is federally illegal.

Here in Montana, shed hunting is a mostly unregulated pastime. Certain wildlife management areas prohibit the collecting of sheds until May 1, and the shed hunting community turns up in force in these areas. They camp out and line up in droves to be among the first to scour the landscape.

“Ethical behavior is what you do when no one is watching — even when doing the wrong thing is legal.” The words of Aldo Leopold hold accountability that goes far beyond the legalities. It’s an accountability that rests with the individual, and that in itself should be taken seriously.

Does the ramped up demand for shed hunting opportunity require universal seasons across the West and beyond? It’s yet to be seen. But Nikonow has faith in the individual for the moment.

She said, “I think it’s important for people to make the decision themselves to give the animals a respite rather than wait for an agency to mandate that decision.”

Up Next: Dick’s to Pull Guns From 125 More Stores as Stock Tumbles