With a history dating back hundreds of years, blade designers approach the Barlow Knife with a form of reverence. A. G. Russel, in his sixth decade, takes a new approach. 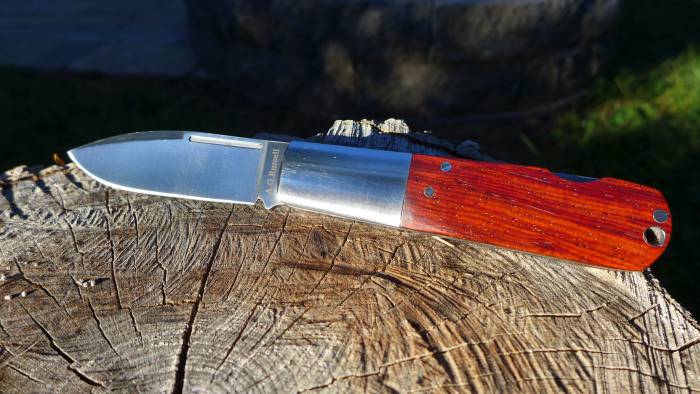 A. G. Russell has been in the knife business, selling sharpening stones, and later knives of his own design, along with other brand’s blades, for more than 50 years.

He has seen folding knives evolve from the traditional slipjoints your grandpa was fond of, to one-handed opening marvels, to massive titanium framelock flippers of today.

In that time Russell has focused on good, solid design over following trends. My favorite Russell design is the Medium Barlow, pictured above.

The Barlow is a knife that has a long and foggy history. Early designs were made in Sheffield, England, though no fewer than three men are cited as its original designer. The core of the Barlow design is the same — a rounded teardrop shape handle, a small blade around 2.5 to 3 inches, and an extra long bolster, usually about 2/5th the length of the handle.

Some models have an extra penknife-style blade, but most are single-blade models. There were also some versions that had different blade shapes and ways of opening the knife (all were two-handed, though).

After its birth in Sheffield, the Barlow, like many things, came to America and made its way up the Mississippi River. The knife was so popular that it made an appearance, by name, in the work of Mark Twain. Tradesman, boys on their way to a fishing hole, and riverboat gamblers all could have had a Barlow in their pocket. 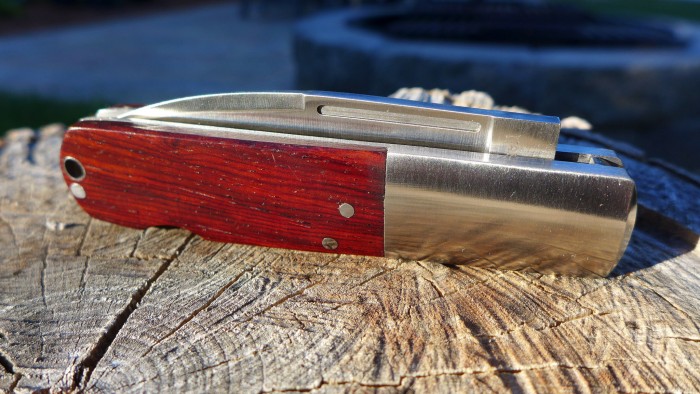 With this history, some approach the Barlow form with reverence, altering nothing (see: GEC’s Tom’s Choice Barlows), but A. G. Russell, in his ninth decade, isn’t afraid to mess with a formula.

The Medium Barlow’s first addition is its most clever–it looks like a traditional two-handed opening knife, but its long pull-style opener is cut in such a way that you can easily open the knife one-handed.

Russell also altered the blade shape, giving the knife a very easy on the pocket spearpoint blade (the traditional clip-point blade has something of a pokey point at the top of the clip). Finally, for safety, he dropped a backlock on the blade.

Overall, the Medium Barlow is a very fun knife to carry, totally non-threatening and just the right size. The knife comes in three handle varieties–cocobolo, bright yellow delrin, and black Rucarta. It lacks a clip, as this is still a true pocket knife, but that’s not the end of the world. For the money it is a great little slicer, and something with a story behind it, too.

Up Next: Multi-Tool Survival Knife