Multitools come in all shapes and sizes. Here’s our short list of the best pocket multitools.

We love multitools. Whether you’re hiking, camping, or hitting the trails with your bike, few pieces of tech provide such versatile service. But when putting together our Best Multitools for 2022 guide, many of the offerings leaned toward the larger side.

And while belt sheaths are a great carry option for the outdoors, what about those days when you’re traveling or milling around town?

And let’s be frank: As much as we love adventure, a good portion of our lives remain grounded in civilization. And for the day-to-day activities between stints in the wilderness, pocket multitools can sometimes be a better fit. As such, we’re highlighting five options for everyday carry, each with a different skill set.

What they share is this: A capable, ready ethos that can tackle more tasks than your standard keychain tool or pocket knife. They’re also light and affordable, providing comfort for both your wallet and pocket. Take a look below to find the best mini multitools for your daily needs. 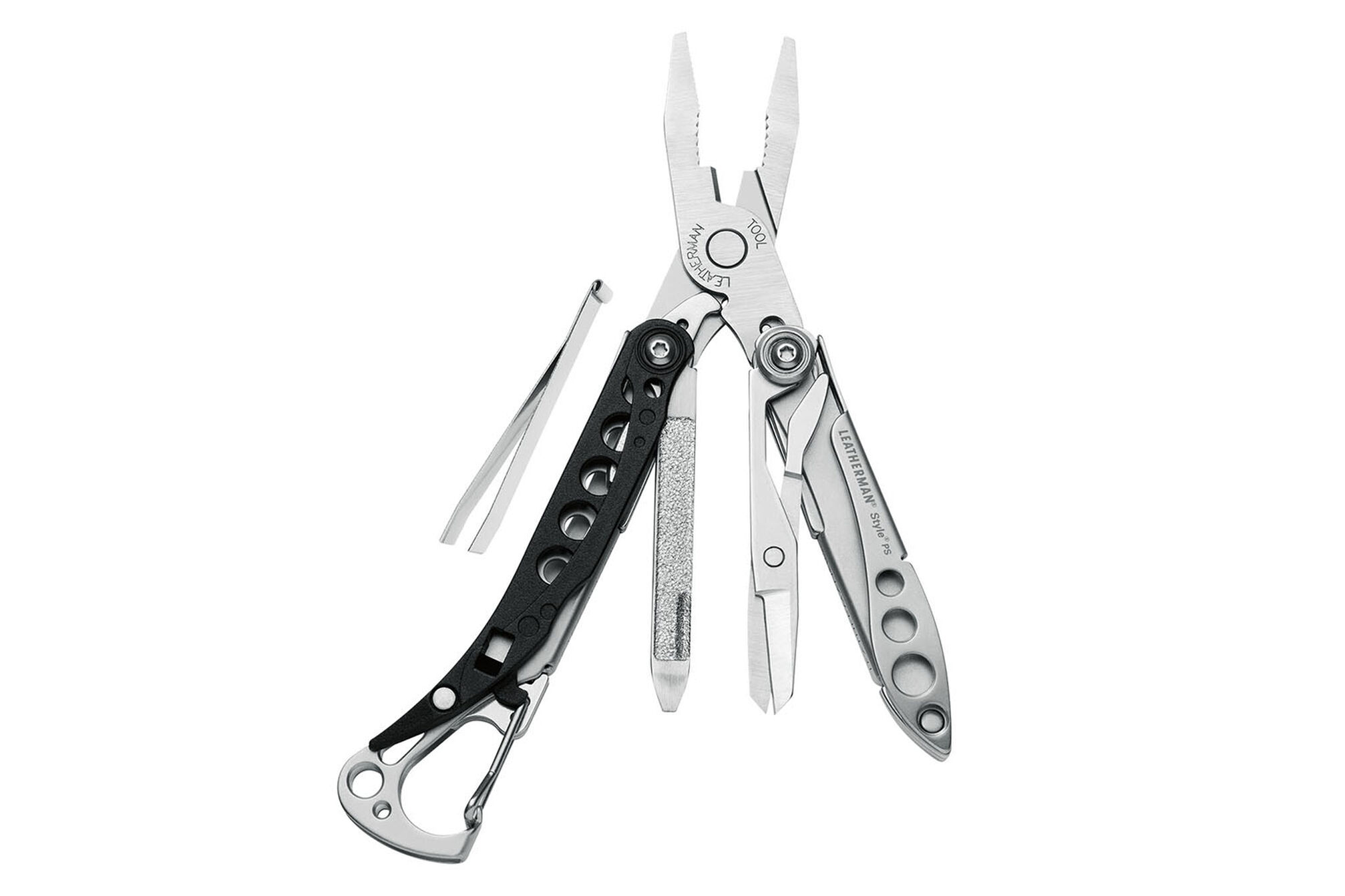 I’ve been singing the praises of this tool for years, and with good reason. With eight tools crammed into less than 3 inches of space, the Leatherman Style PS is the very essence of compact capability.

Its snappy, spring-action design houses the best set of compact pliers I’ve encountered, with two levels of grip and integrated wire cutters. There’s also a file, a flat screwdriver, and a nice pair of scissors. Add in some tweezers and a carabiner that doubles as a bottle opener, and you’re left with a well-rounded miniature toolbox weighing just over an ounce and a half.

One thing noticeably absent here is a blade. While Leatherman does offer such an option on the similar Style CS, I prefer the PS specifically for its knifeless nature.

The lack of a large cutting tool makes this a great pocket multitool companion when flying to your next adventure. It’s fully TSA-compliant, and the scissors are enough to handle minor cutting tasks.

A word of caution, however; just because airports in the USA will let these pass doesn’t mean you’ll be covered elsewhere. My previous model was confiscated on a return trip from Mexico, despite its lack of a blade. But, with a price point of just $35, it was easy enough to order a new one when I got home. 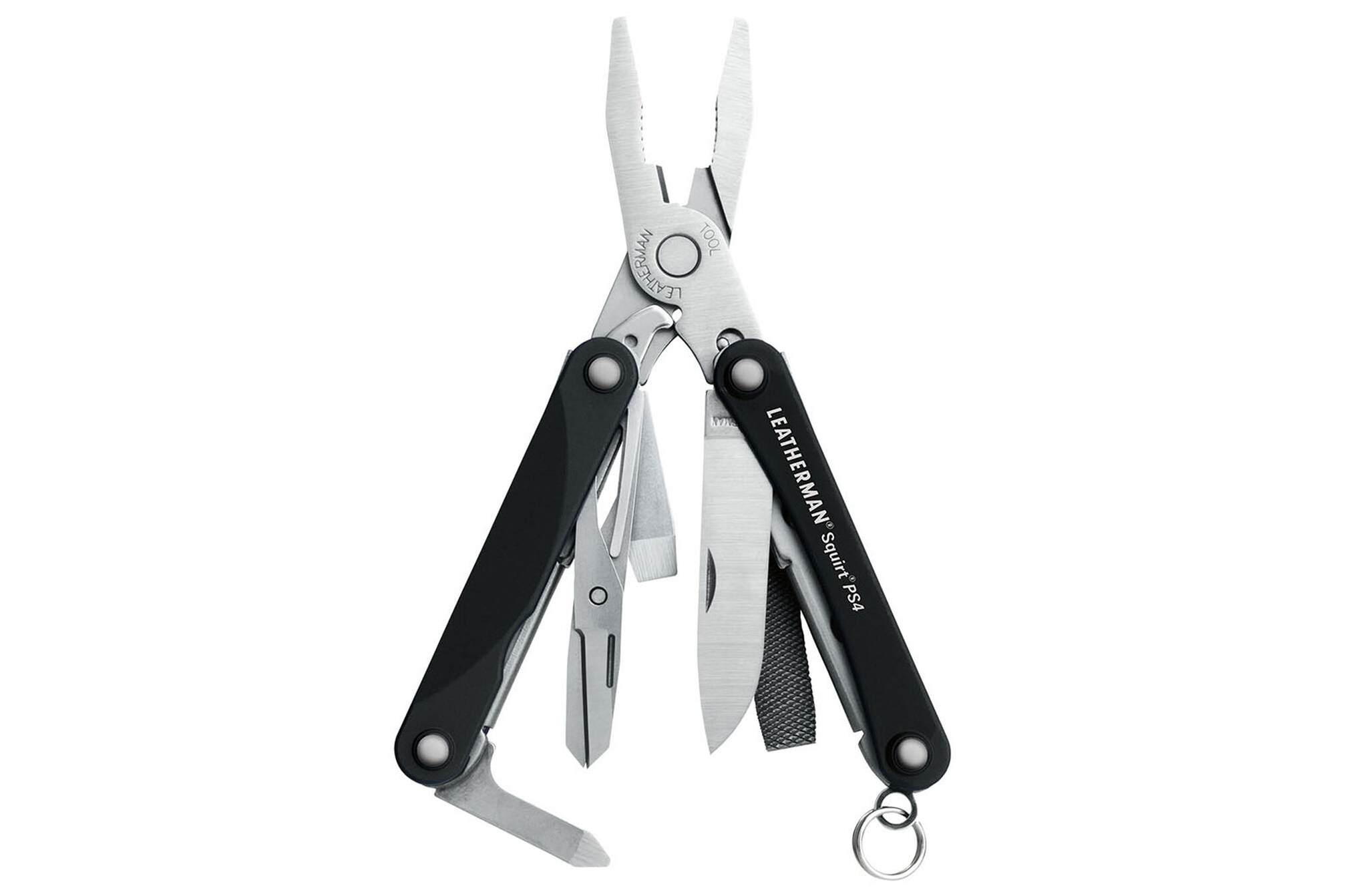 If you like the size of the Style but are looking for a few additional tools, the Juice PS4 ($40) is a great way to go. Offering the same spring-loaded pliers as the model above, the Squirt is also slightly shorter at just 2.25 inches.

But inside its hard-anodized aluminum handles dwells a kit that’s every bit as capable. With scissors, multiple screwdrivers, and a combination wood and metal file, it almost feels like a slightly heavier-duty option.

But perhaps most significant is the inclusion of a 420HC stainless steel blade. With 1.6 inches of reach, this tiny knife is a standout inclusion in the Squirt’s arsenal.

Not to mention, it’s a quiet testament to Leatherman’s commitment to manufacturing excellence. Sound like an overstatement? Take a closer look. While most small pliers-style tools come with a chisel-ground blade, the folks from Oregon have taken the time to run a bevel down both sides.

So, instead of one angle forming a point with a flat edge, this gives you an actual, functionally crafted knife.

And, like the Style, all of these tools can be accessed without deploying the pliers. While I’d argue that its 2 ounces are a bit heavy for a keychain, a little bit of paracord looped through its ring would make this a great pocket companion. 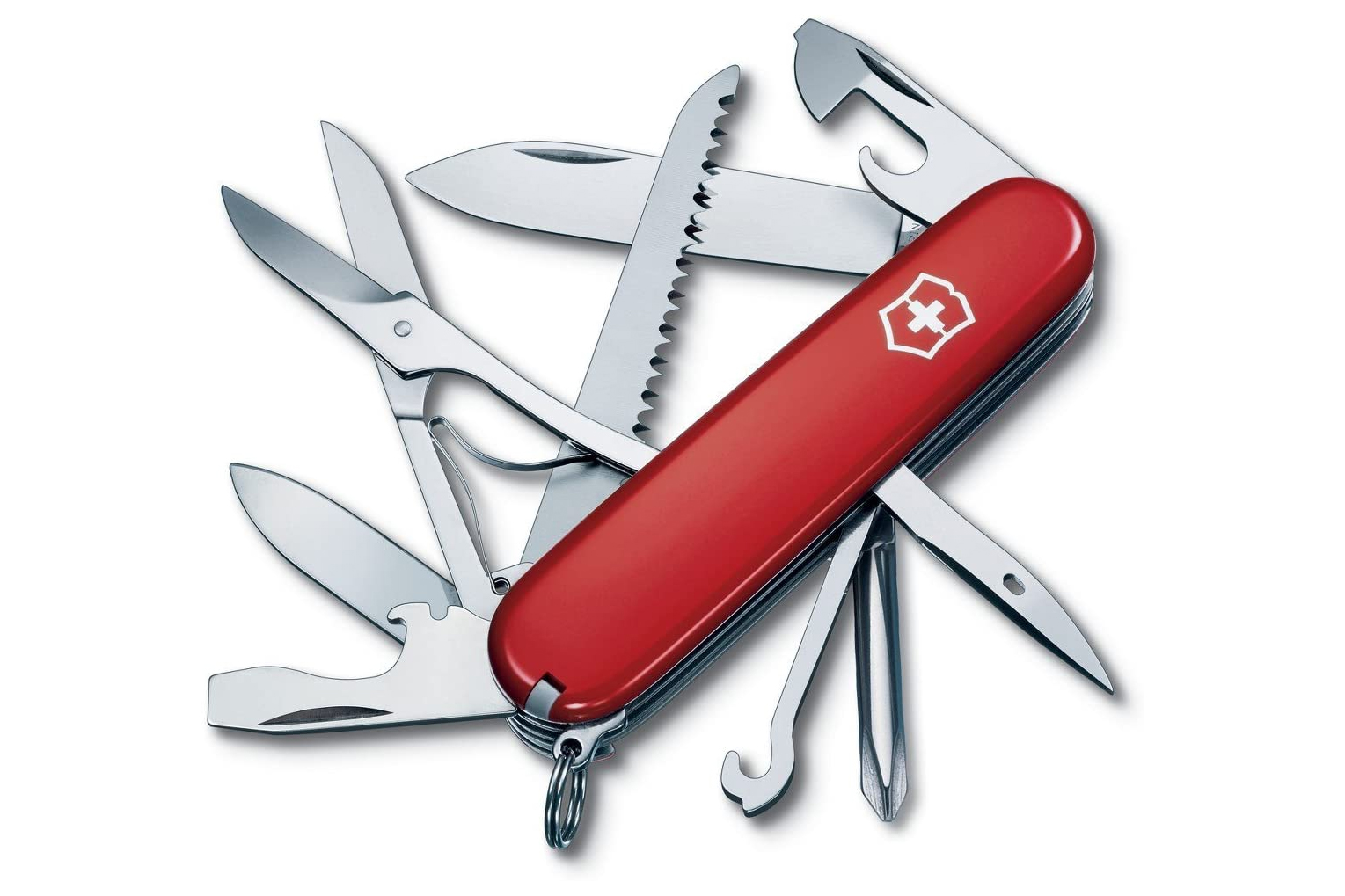 I thought about including the classic Swiss Army knife, really I did. But this is a list of the best pocket multitools, not the best keychain multitools. And while the two listed above are rather small, they’re much less likely to tumble from your pocket than is the Classic.

Instead, I went for something that shows off a little more of Victorinox’s range.

With 15 functions tucked into its ultra-recognizable frame, the Fieldmaster ($38) is a great representation of this company’s versatility. The standard knife and scissors are present and functional as always.

But then you get options like a saw, can and bottle openers, and three types of screwdrivers. Add in the tweezers and a secondary blade, and the capability here is almost off the charts.

I will admit that some of the tools are only questionably useful. When was the last time you looked around and wished that you had a sewing awl or multipurpose hook?

But on balance, the Fieldmaster is an incredible piece of gear. It takes all the promise of the keychain Classic, and pushes it about as far as you can without splitting the chassis and adding some pliers. For a one-piece multitool, this is near the top of the heap.

Speaking of single-piece pocket multitools, few have drawn more intrigue than the Gerber Armbar ($37). One of the early proponents of pliers-based tools, Gerber has had some pretty high moments in the industry. Thanks to a combination of poor design and production, it’s also had some pretty embarrassing lows.

But with the Armbar and its screwdriver-centric approach, it really feels as though the brand has gotten back into some interesting territory.

Per Gerber’s website, here’s what you’re getting for less than $40: “An awl, pry bar, bottle opener, hammer, scissors and a 2.5 in. extension driver with double-sided bit.”

Add in a 2.5-inch blade with a frame lock and single-hand opening, and you’ve got a pretty great recipe on your hands. The whole assembly weighs in at 3.1 ounces, which is also less than some higher-end pocket knives.

But unfortunately, weight comparisons are kinda where the “high end” discussion falls off. The Armbar is using basic stainless steel, which probably won’t last for more than a few years.

I’d really like to see Gerber offer it in a better option, especially because that screwdriver is so darn good. But if you’re willing to roll the dice, this is definitely one of the more innovative options out there. 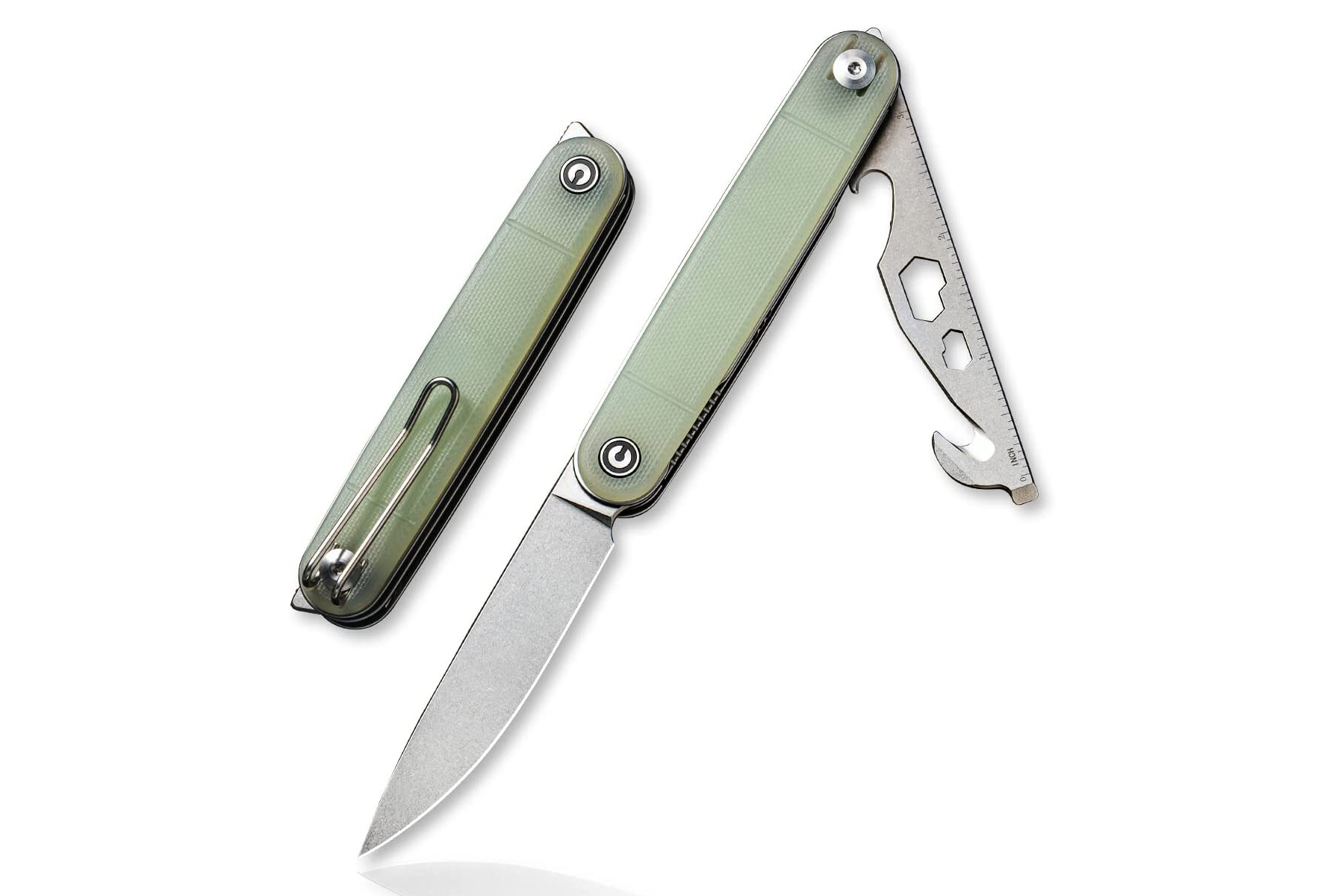 So, we’ve covered a few different types of pocket multitools — pliers-based, screwdriver-based, and single-piece construction. But, hang on — what about one that’s actually more about the knife?

If that’s what you’re after, then it’s hard to argue with the uniqueness of the CIVIVI Crit ($72). Just look at that blade: 3.18 inches of Nitro-V steel, with a beautiful flat grind over its stonewashed finish.

And with a thickness of just 0.1 inches, its slicing ability will be on par with the Victorinox models listed above. Only here, the front flipper and liner lock design make for a snappy, fidget-friendly action.

But what’s going on with the “multi” in this particular tool? At first glance, it appears to be a piece of metal with holes drilled in it. Those are variously sized hex keys, giving you the ability to turn bolts on vehicles or other machinery. It also sports a pair of slotted screwdrivers, along with a bottle opener and a strap/clamshell cutter.

While this may at first seem like a weird combination, CIVIVI has put together a compelling package here. And where some companies are vague about the materials they use, this group proudly lists its ingredients. In addition to the G-10 handle slabs and the aforementioned Nitro-V, the multitool is wrought in 9Cr18MoV, with both running on caged ceramic ball bearings.

While it may be the most expensive offering here, it’s also one of the most original. Pocket knife enthusiasts will find plenty to like, as will those seeking a little added capability in their EDC.

The Best Multitools of 2022

We tested the best multitools of 2022 with options for every use case and budget. Top picks include Leatherman, Gerber, and more! Read more…

The Best Tactical Knives of 2021

Known by many names, a tactical knife generally refers to a hardworking, do-all blade. Here, we review the best folding and fixed-blade knives for every budget and use. Read more…

Saving…
The Best Pocket Knives of 2022
Spring Savings: Score Up to 40% Off During Gerber Sale
×