Which sub-$20 fixed-blade knife will take a licking and keep on sticking?

We all do dumb things. For instance, I’ve chugged hot sauce and accidentally set a computer on fire. But if you’re going to act like a tool, sometimes it’s nice to have a solid tool with you.

When you have nice things, you need to take care of them. But if you have slightly less-nice things, you can abuse them a little more — right? I decided to find out just how reckless I could be with one of the most basic, versatile outdoor tools there is: the knife.

Here, we’ve assembled a trio of under-$20 fixed blades with the aim of determining which can stand up to a series of increasingly bad ideas. 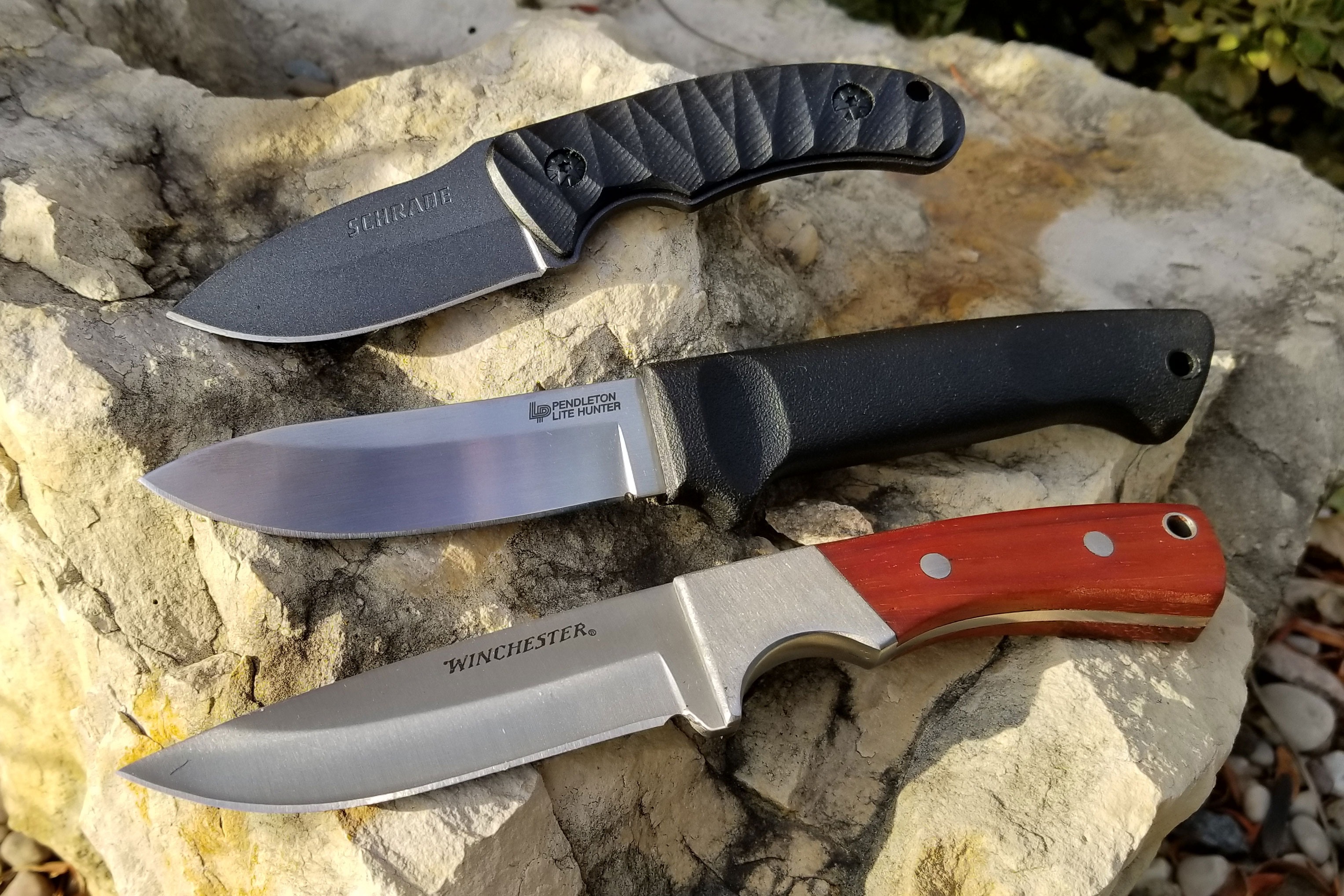 We begin with the aptly named Winchester Small Fixed Blade Knife. Coming in at $16, it features 3.6 inches of cutting edge and wood handle inlays. If you’ve browsed the shelves of your local big-box store, odds are you’ve seen this one. Then there’s the $13 Cold Steel Pendleton Lite Hunter with a polypropylene handle and identically sized blade. Last and (dimensionally) least is the Schrade SCHF57, a $15, black-all-over affair with micarta handle slabs and 2.6 inches of edge.

Let’s touch on the steels these knives utilize. The SCHF57 uses Schrade’s 65Mn high-carbon steel, a lower-rent cousin of its popular 1095 that generally favors toughness over edge retention. Cold Steel opted for German 4116 stainless, which it lists as a player in the “pharmaceutical industry and in high-end kitchen cutlery.”

And let me address the Swedish elephant in the room: Yes, I left Morakniv off the invite list. Here’s why: Mora makes bushcraft-focused blades. The Scandi edges are great against wood, but they’re not much help in the kitchen, and daily chores can pose a problem for those without a micro-bevel. I’m a huge fan of Mora, but this is meant to be more of a general-purpose roster. 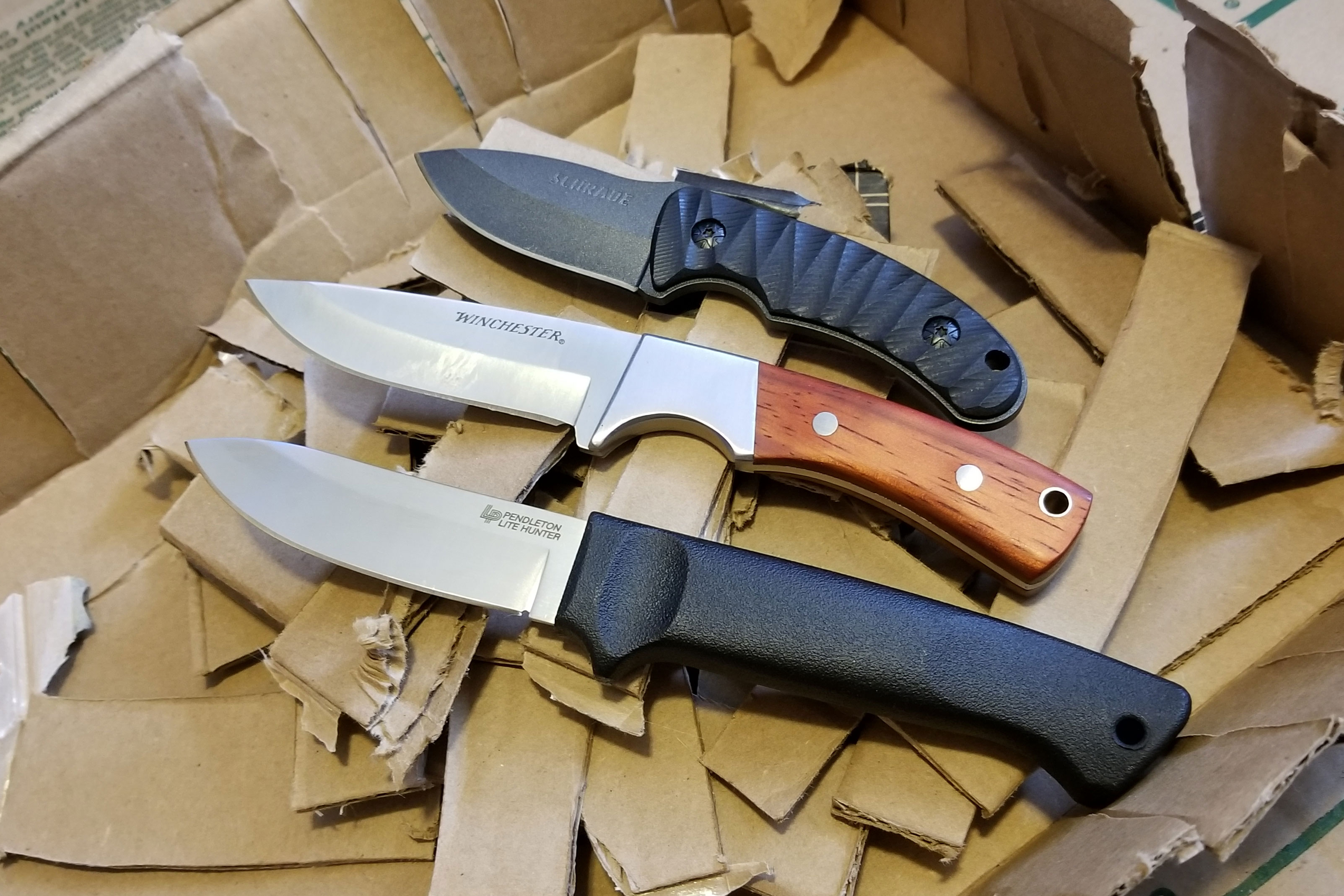 We begin with the basics: cutting cardboard. I had a few boxes in my office that needed breaking down, so each knife got a shot at 30 to 40 cuts.

Schrade: The short blade and wide spine of the Schrade made for a bit of a challenge, and the factory edge could’ve been better. Its short handle wasn’t the most ergonomic, though the overall function was adequate.

Cold Steel: For its part, the Cold Steel glided through the leftover boxes like butter. The plastic handle offered a great deal of comfort and control, making the overall experience a pleasurable one.

Winchester: While the Winchester’s grip was decent and the blade sliced well, I noticed some edge problems developing by the end of the cut test. See? 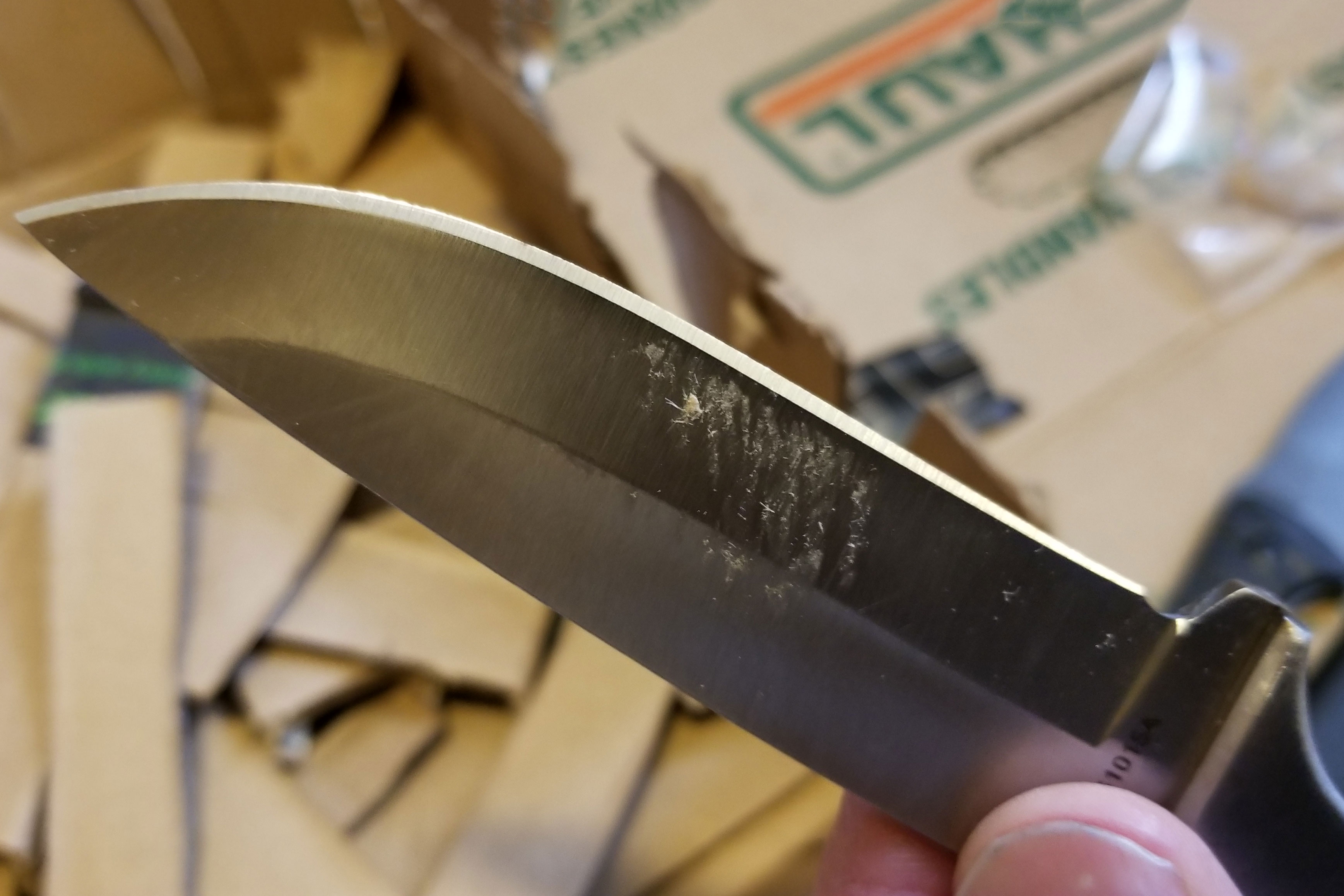 That’s not stellar, and it certainly doesn’t bode well for the blade’s “surgical stainless.”

Here’s where things start to get dumb. Batoning is among the most divisive acts in the hobby, especially with small knives. Sounds like an opportunity to push boundaries, doesn’t it? 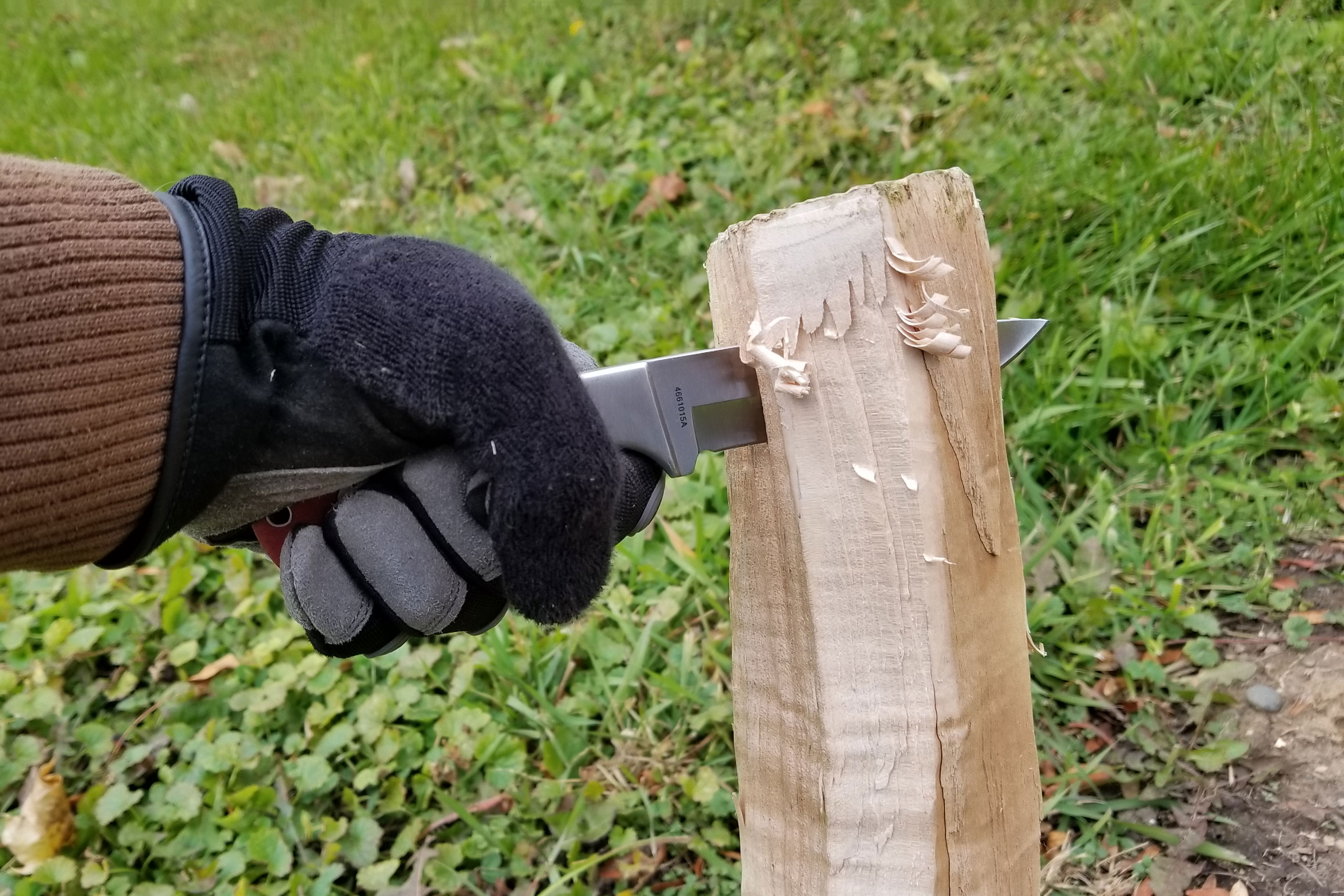 Each knife faced the same knotty pine I’ve used in previous tests. None fared particularly well due simply to their short blades.

Schrade: Shortest of the shorties was the Schrade. While its thick stock and full tang have the strength for this sort of work, there’s not enough edge to straddle anything beyond small kindling.

Cold Steel: This knife provided the biggest surprise in this test. I figured that its partial-tang construction would lead to a decided wiggle after smacking it through a log. But nope, the blade remained rock solid. Again, this isn’t the intended use, but it survived the batoning like a champ.

Winchester: The Winnie wasn’t so lucky. While the blade length put it on par with the Cold Steel, its handle design is decidedly wrong for this application. The exposed tang sends the shock of the baton straight into your palm, hurting your hand … and confidence. And take a look at the handle scales. 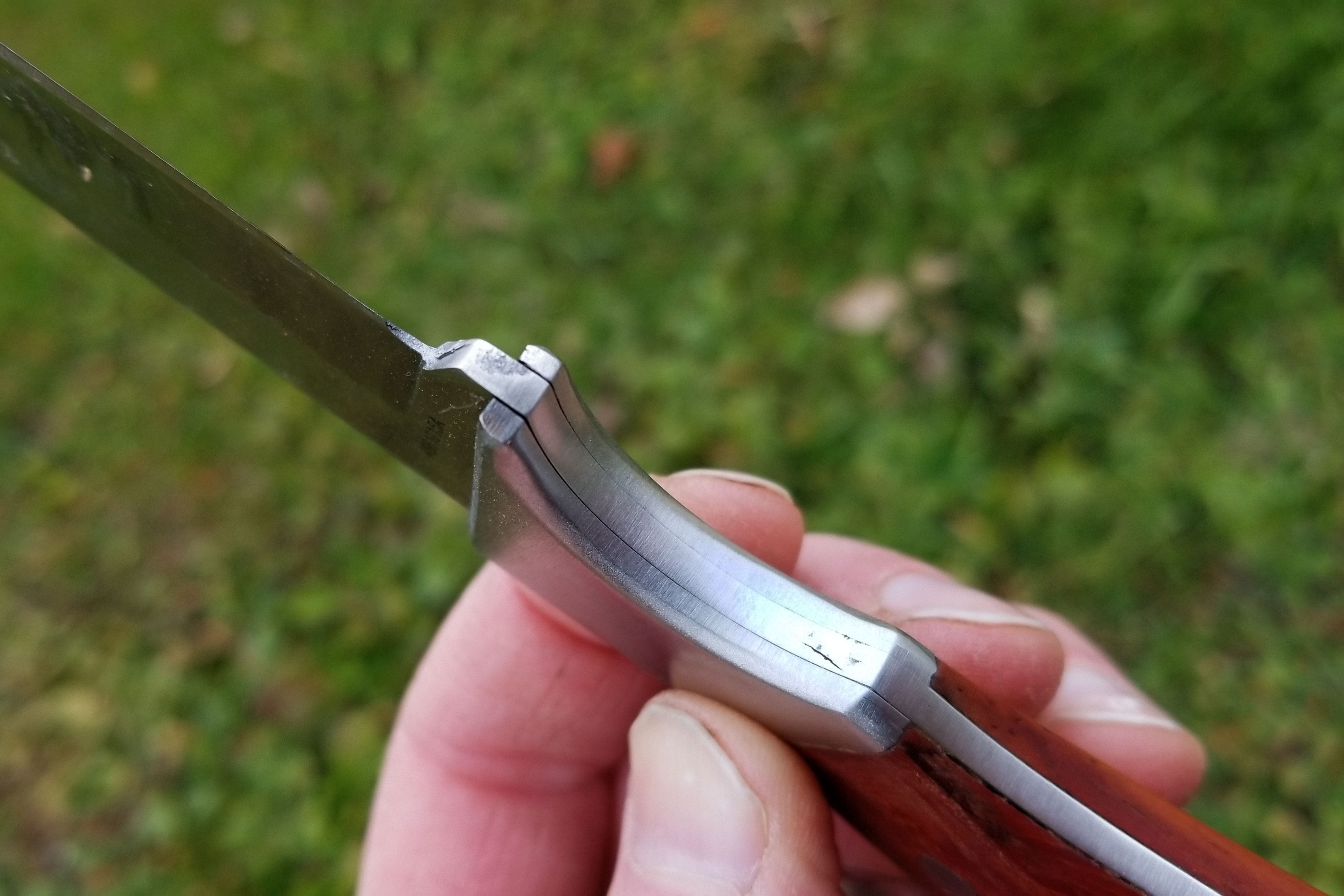 Looks like they’re separating from the handle, and the Winchester is separating itself from contention. 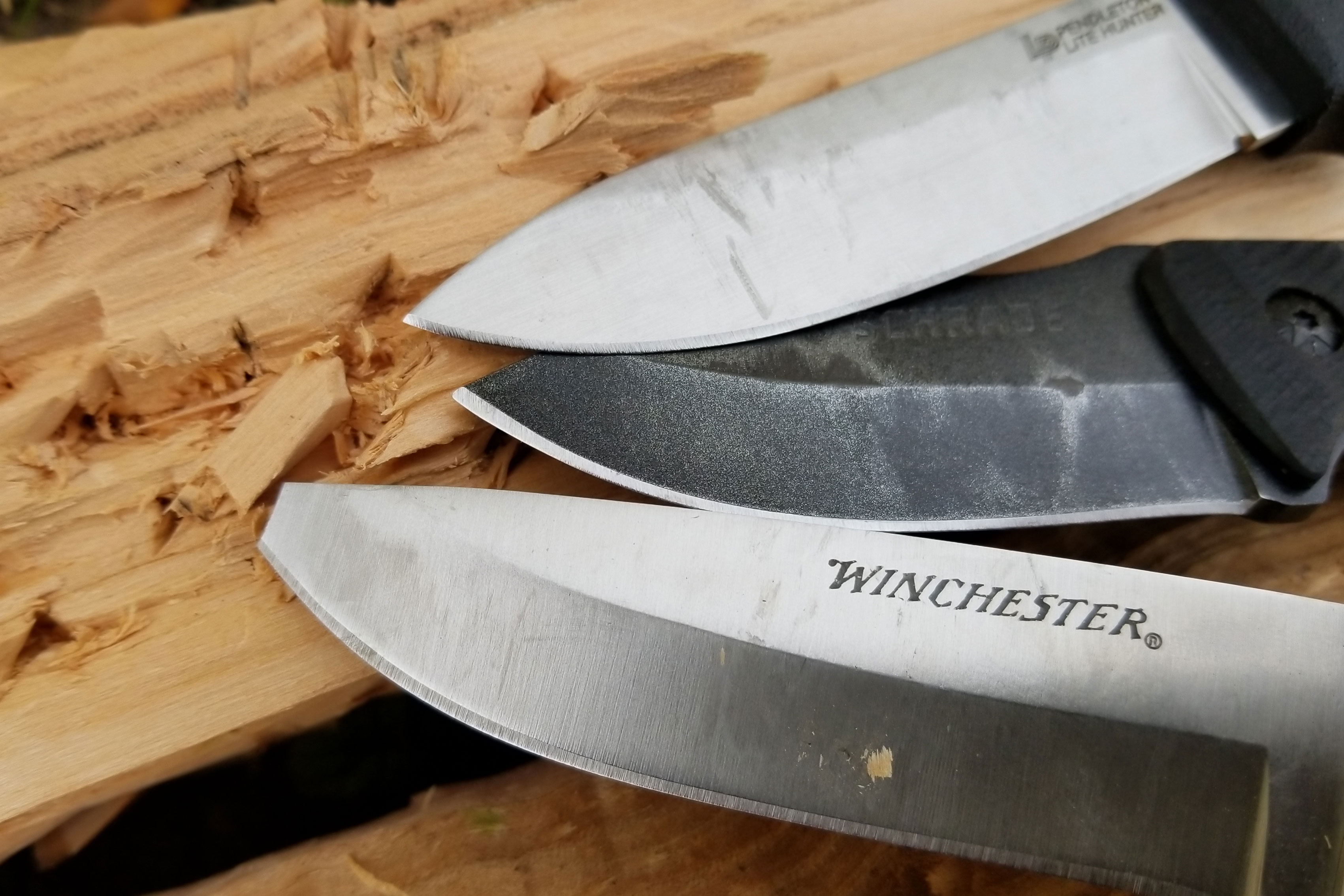 What’s the most common form of knife abuse? Batoning gets all the attention, but prying is the real everyday destroyer. This makes tip strength an important component of any beater blade.

The test was simple: Stab into the split wood and jerk the blade to the side. This resulted in a series of neat, triangular divots, at least in the case of the Schrade and Cold Steel. But after just three thrusts with the Winchester, something was left behind. 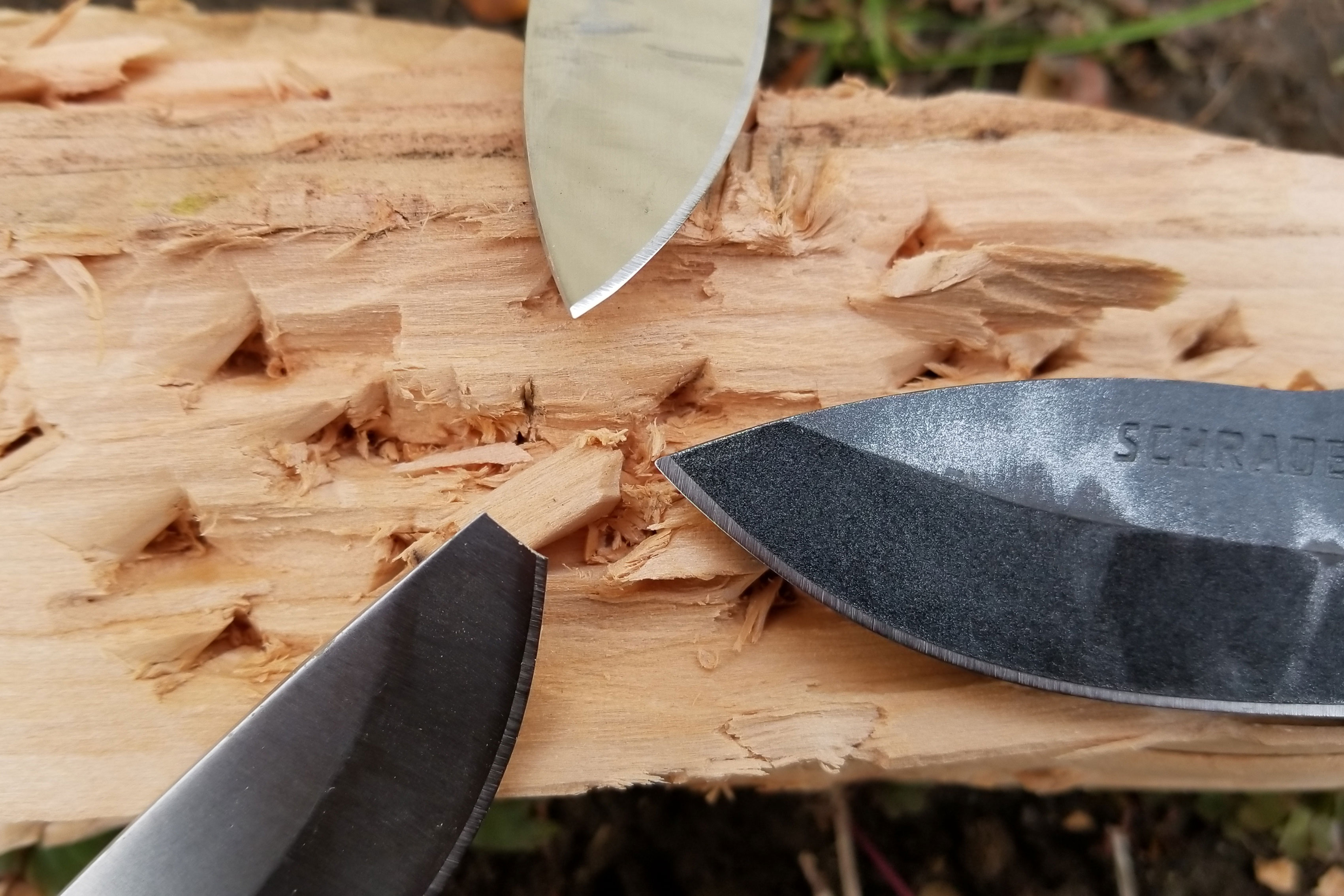 No good. This knife and its tip may be riding the pine for the rest of the test.

Torture Test 4: Swords in the Soil 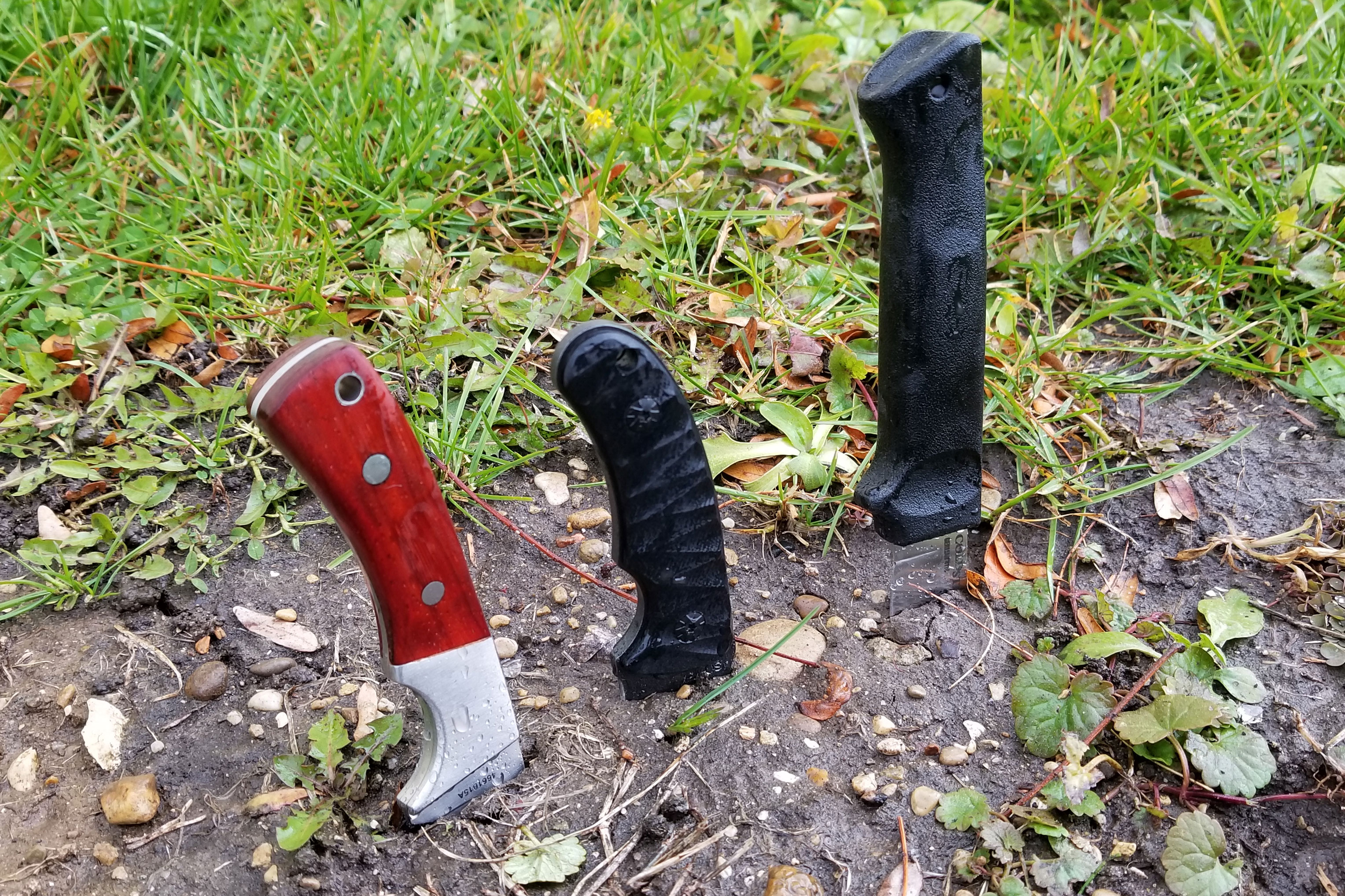 As a fan of both the outdoors and Guns N’ Roses, I sometimes “end up walkin’ in the cold November rain.” And with the clouds frowning down on my batoning exploits, I left these discount rockstars in the drizzle for over an hour. Then, like a reverse King Arthur, I plunged each blade up to its hilt in the stony soil behind my garage.

After a few hours in the elements, each member of the silty trio was returned to its sheath without the benefit of a wipedown. There they stayed for the next 24 hours, or about enough time to play both halves of “Use Your Illusion” two dozen times. 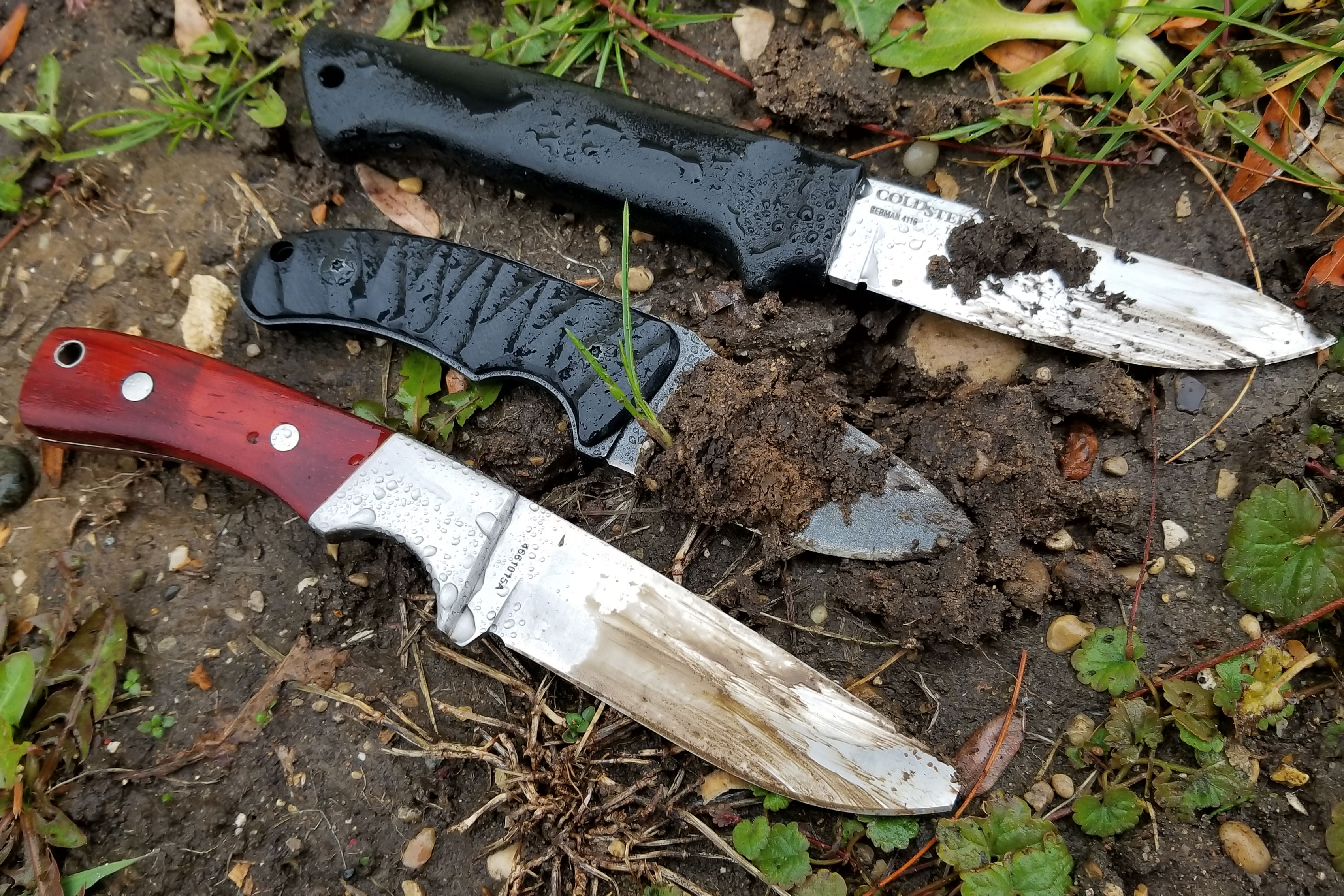 As it turns out, cheap stainless is better than no stainless. The Schrade showed significant rust along its high-carbon edge, but the damaged Winchester avoided any further signs of wear. But, unlike the Cold Steel and Schrade, its sheath lacks any sort of drainage hole. This could become an issue in extended field use. 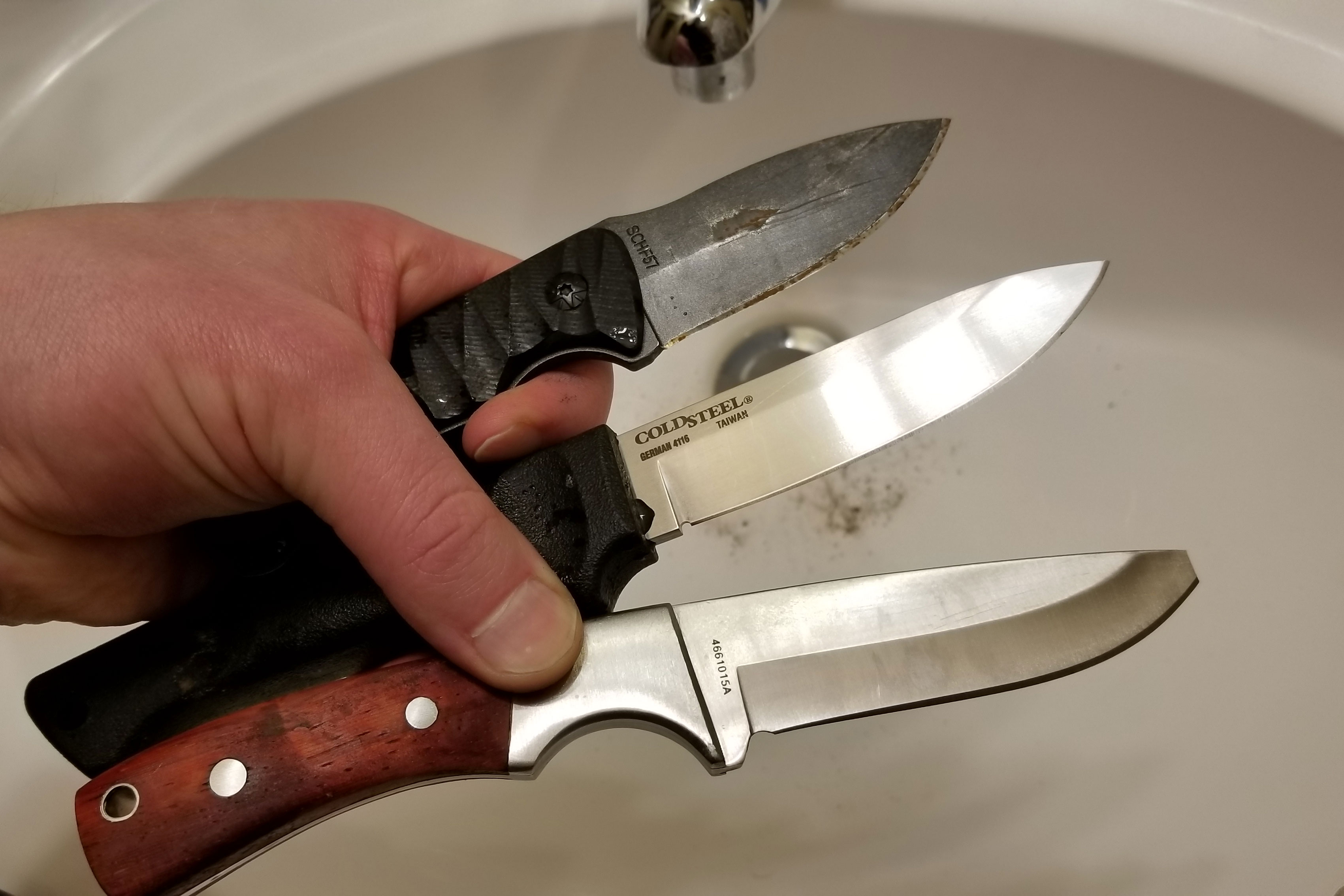 The Pendleton, however, showed zero issues with the moisture and mud. Wiped clean, its blade appeared just as it had 24 hours before. This bodes well for hunters and campers seeking a low-maintenance tool.

I spent an entire work week trying to decide what else to do to these blades. What I came up with was a hammer, a Hamm’s beer can, and three paving bricks.
The plan went like this: Hammer each knife into a brick and see which can still cut through an empty beer can. As dumb as that sounds, it seemed like a good idea at the time. 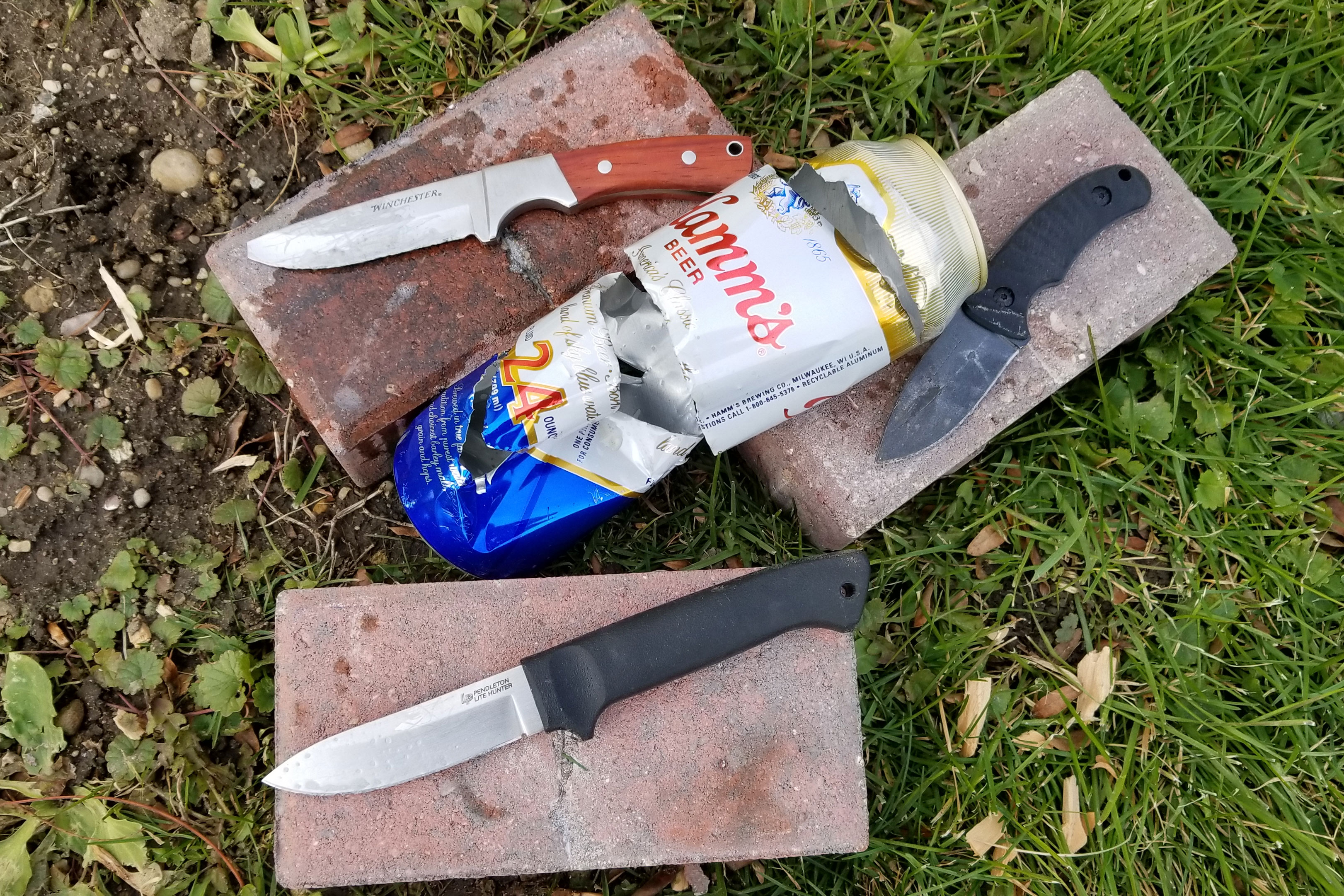 Yeah, not so much. This test ruined the edges on all three blades. The Winchester took the worst of it, really struggling with the aluminum. The Cold Steel performed better than expected and was still able to slice with relative alacrity. And the rusty Schrade did the most damage to the brick, while still cutting the can without issue.

So, if you’re looking to do really stupid stuff, the SCHF57 may be your tool. 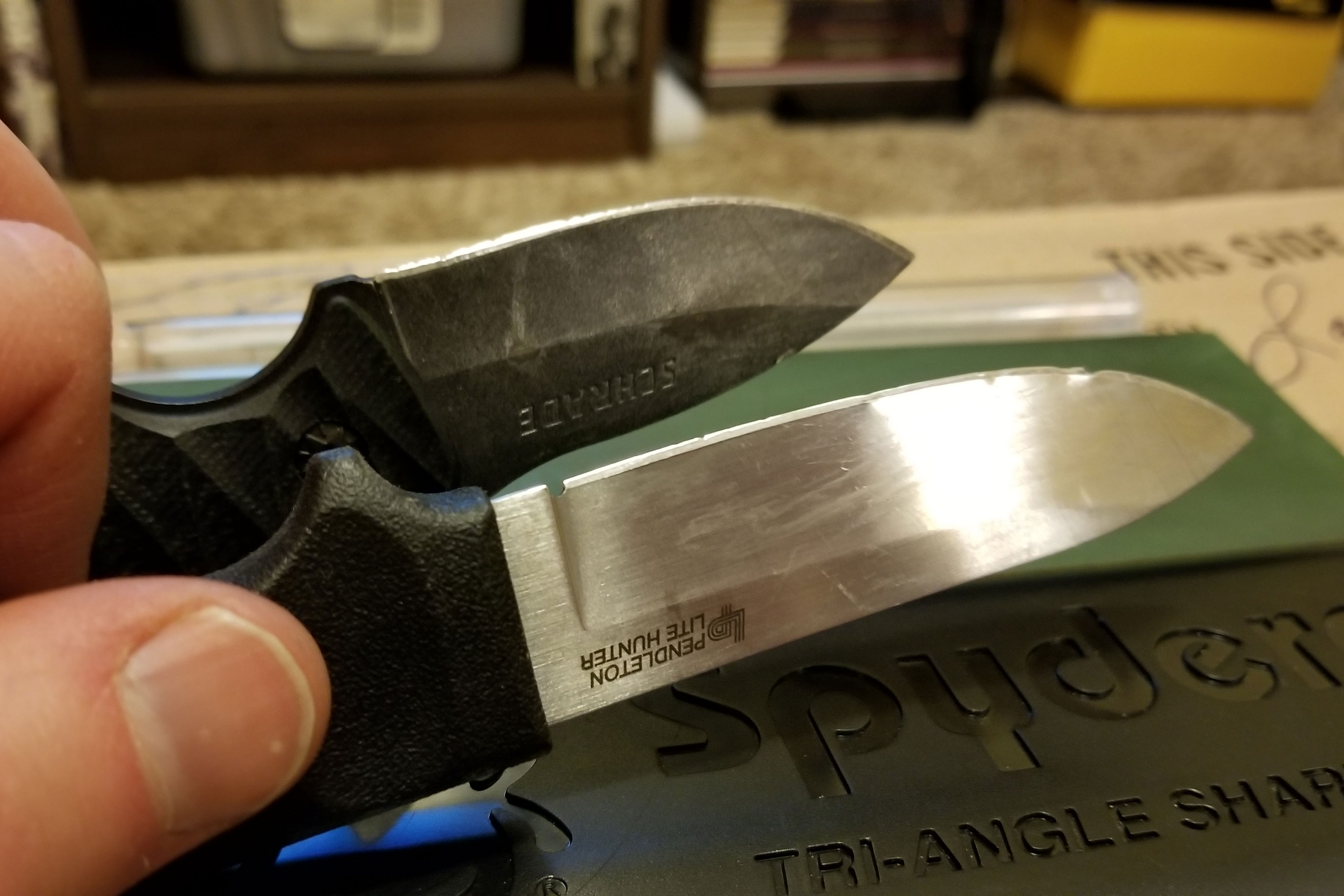 I closed out the test with a session on my Spyderco Sharpmaker. While you’d need a grinder to truly even out the bevels, I was able to put a decent edge back on the Schrade and a genuinely sharp one on the Pendleton.

As for the Winchester — well, I tried. But after several minutes, I worried it was damaging my stones. It was well and truly blunted, and nothing short of a power tool could bring it back to life. 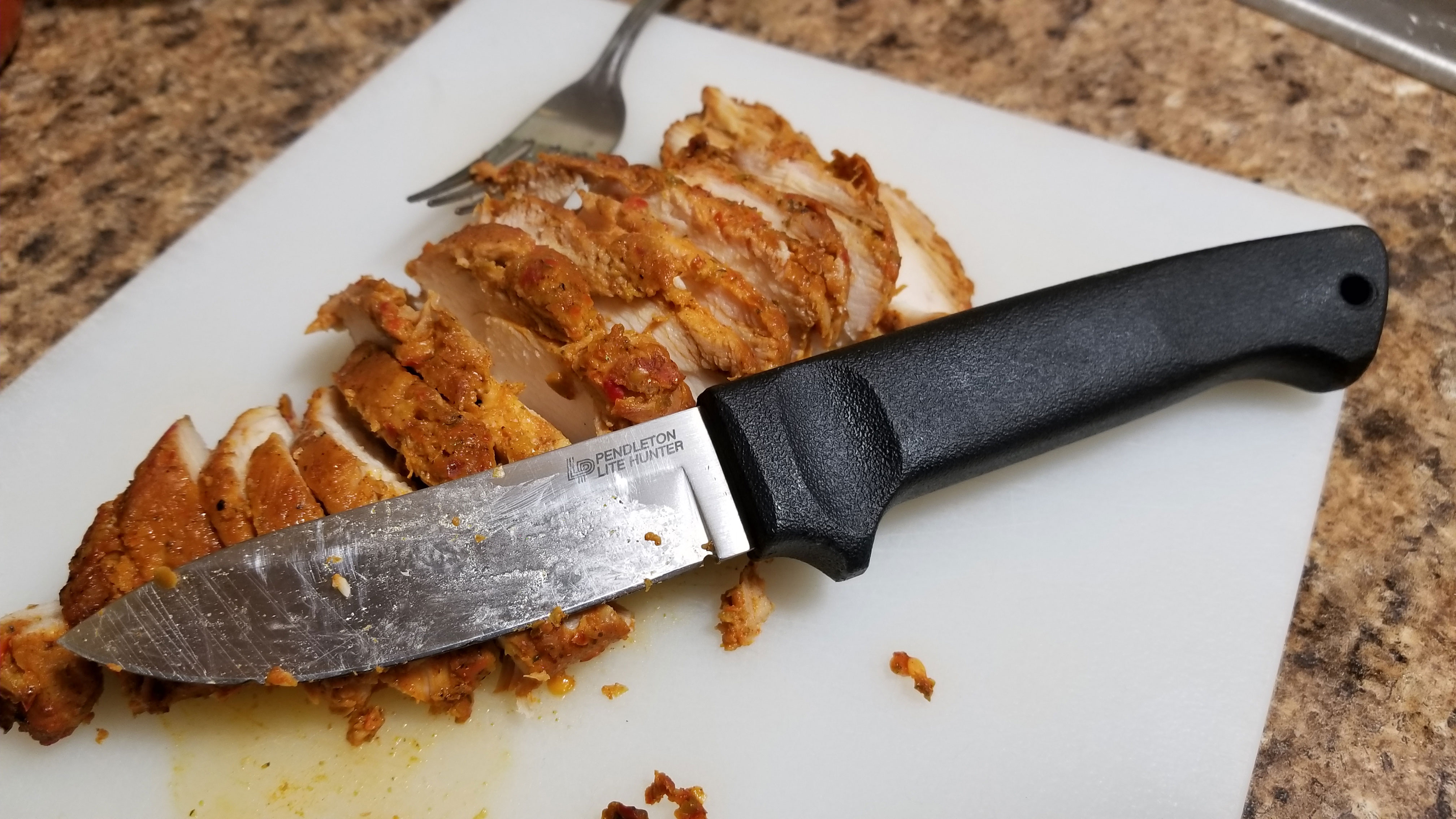 Jackassery aside, the Cold Steel is the surprise winner here. While I expected a strong showing from the Schrade, I was unprepared for the level of sturdiness in this Pendleton.

It’s also the cheapest of the trio despite boasting the highest cutting power, edge retention, and rust resistance. If you’re looking to spend less than $15 on a rugged field and hunting knife, there’s nothing “Lite” about this Hunter and its German 4116 steel.

Up Next: Watch: Circular Saw Blade Crafted Into Meat Cleaver