The $80 ESEE Izula-II takes its name from one of the fiercest insects in the jungles of Peru – a six-legged stinger known as the “Bullet Ant.” And like a queen commanding her colony, this knife formed a legion of loyal followers. 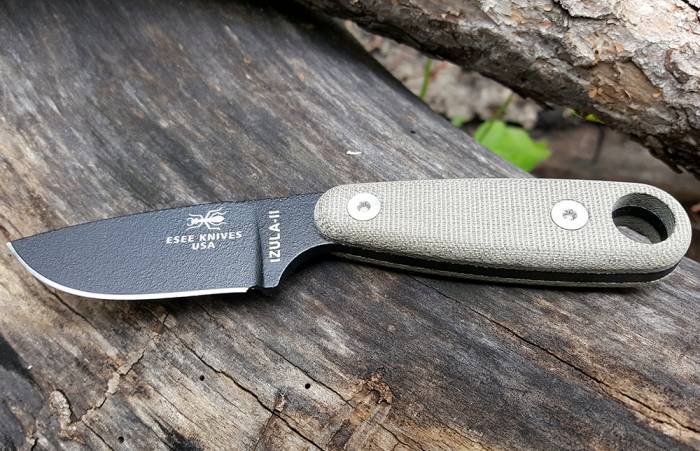 I spent several weeks with the Izula-II before finally deciding to join the swarm. Here’s what I found.

With an overall length of 6.75-inches, this is the smallest fixed blade I’ve carried into the wilderness. Its dimensions are identical to the company’s original Izula, save for an extra half-inch added onto the handle.

The cutting edge measures just 2.63-inches, with a flat grind topping out at 0.156 inches across. Its weight is comparable to many similarly sized folding knives: 3.2 ounces minus the sheath. 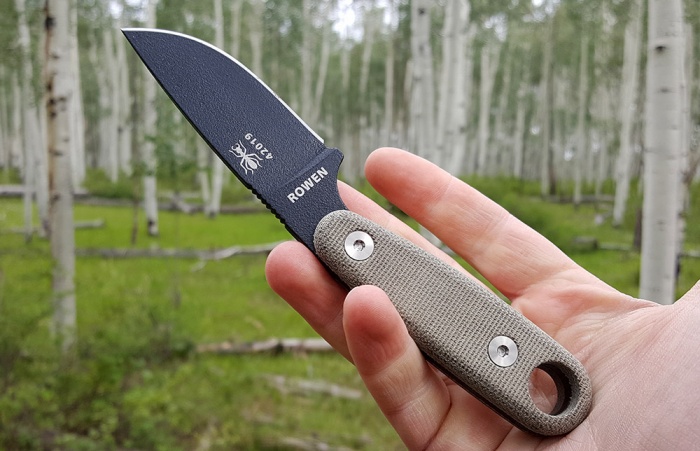 Unlike the first Izula, the Model-II comes with textured canvas micarta handles. These fasten with standard torx screws, and you can remove them to save ounces. The rest of the knife is fashioned from a single chunk of high carbon 1095 steel, with a generous lanyard hole cut into the pommel.

While not every ESEE is made in the USA, the Izula-II hails from American company Rowen Manufacturing. It’s so confident in the product that it offers a “100 percent unconditional lifetime guarantee.” It’s an impressive warranty, even covering modifications and disassembly.

As a fixed blade with EDC aspirations, the Izula-II is walking a fine line. It’s small and unobtrusive enough to ride in your pants pocket or clipped to your belt, while still offering enough edge for most daily tasks.

Is it as space-efficient as a folder? Heck, no. But maybe we’re missing the point. ESEE recommends this for hunting, self-defense, or inclusion in your survival kit. I don’t know much about the self-defense part (and unless you’re trained, neither do you), but let’s examine it in the spirit of the other two. 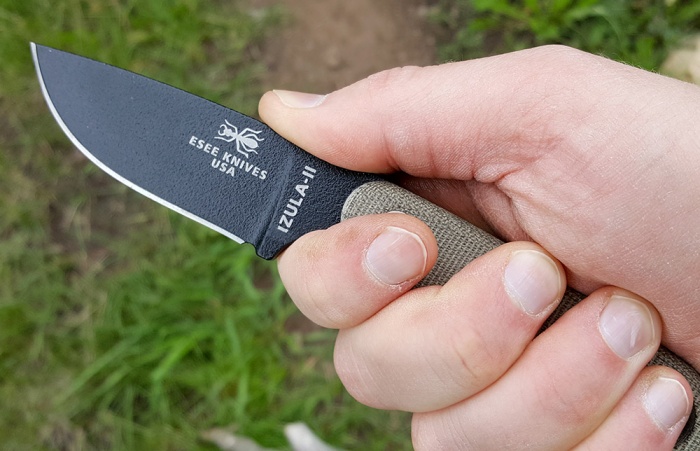 The Izula-II really shines in the outdoors. Its reversible clip allows for ambidextrous tip-up or tip-down carry, with excellent retention on the molded sheath. The added length on the thick handle fits perfectly in my medium palm, and the textured micarta is wonderfully grippy.

As mentioned above, there’s a lot of versatility when it comes to wearing the Izula-II. It rides mostly above the belt, making it especially comfortable when driving out to the trail. But once you’re clamoring over roots and rocks, the high handle can sometimes dig into your ribs.

A simple shift from my belt to the strap of my pack solved this issue. It also allowed for a simple cross-body draw. And, should my right hand become trapped or otherwise incapacitated, the handle is still easily accessible with my left. Just watch the position of your thumb, lest you draw the blade across it. 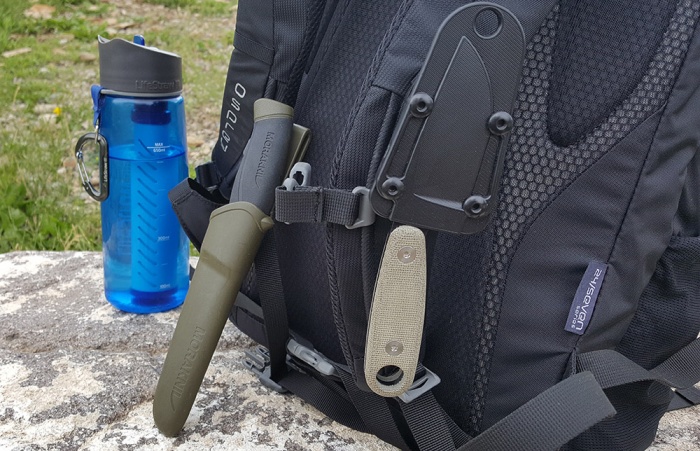 Let’s talk about the ESEE out of its sheath. It’s marvelously ergonomic, with excellent thumb jimping atop the blade tang. It performs well as a food prep and general cutting companion, though there are some limitations when it comes to firecraft.

The flat grind (while certainly adequate) doesn’t shave wood quite as easily as a cheaper Mora. Oddly enough, it did cut nicer wedges into the branches I split for kindling. Unfortunately, the powder coat on the blade also prevents it from working with a ferro rod. 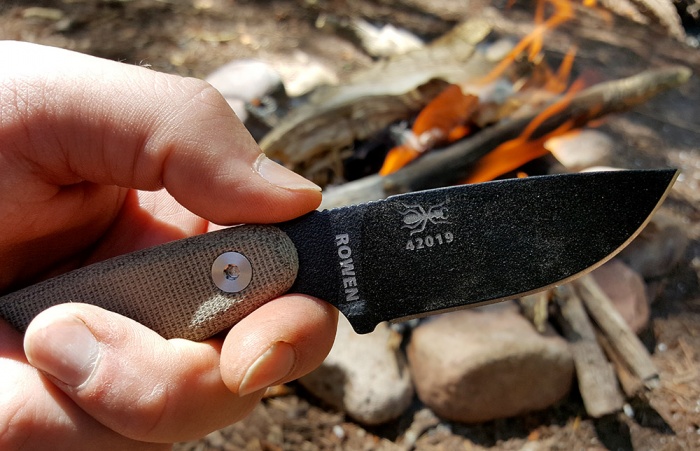 Yet this coating is vital to the longevity of the blade. ESEE states that 1095 high carbon steel “will rust and stain if not properly cared for, especially on the cutting edge and around the laser engraving.”

But this is a known quality with 1095, as is its toughness and ability to take a razor-sharp edge. Keep the blade lubed and dry, and rust shouldn’t be an issue.

So, we’ve covered the Izula-II’s strengths and weaknesses. But here’s the $80 question – Is it worth stepping up from a budget blade like the Mora Companion or Eldris? Yes, but with a few caveats. 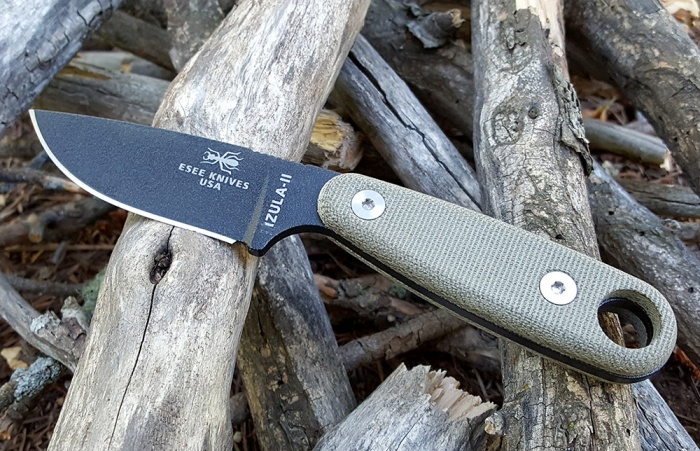 As nice as the ESEE is in hand, I wouldn’t want to use it as my primary wilderness blade. It can’t strike a flint, it rides a little high on the belt, and it doesn’t have the blade length of well-built folders costing half the price.

But as a secondary knife, the Izula-II is pretty compelling. From its multitude of carry options to its rock-solid construction, it’s got so many things going for it. Add in the ESEE warranty and outdoors pedigree and, man, I’m sold.

If you’re in the market for a small fixed blade knife, check out the Izula-II.

And head over to ESEE’s original Izula page if you’d like to see one of its guys allowing himself to be intentionally stung by the knife’s namesake.

Up Next: Form And Function: Choosing The Best Blade Shape