Helle is a brand with a long and sterling history, for many years its Scandinavian-designed knives a pinnacle in the world of production fixed-blades.

The common Helle knife had a comfortable, curly-maple handle, perfectly-executed blade grind, and a traditional leather tube sheath to make it a useful and refined step up from much of the competition.

As the brand’s second full-tang knife, the Didi Galgalu, reviewed here, represents a departure from Helle’s traditional forms. It is high-priced at $249, named after a desert in Northern Kenya, and taking influence from Team Voetspore and its overland journey of 16,000km across the African continent.

The goal was a rugged, full-tang camp or survival knife to be used for anything that arises in the outdoors. Its 5-inch blade is made of Sandvik 12C27 stainless steel, and the knife measures 9.8 inches overall. It weighs 6.8 ounces. 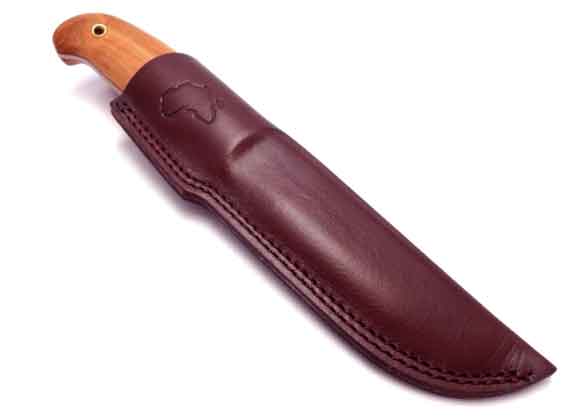 With a Scandi grind and drop-point blade it comes out of the box extremely sharp. The individual knife I tested, unfortunately, seemed to have missed the final stage of grinding (see more on this below).

Having made knives in Norway since the 1930s, most Helle knives fit into a few traditional categories of hunting and camp knives. They are regarded as quite beautiful, functional knives, although lacking the full-tang design required for modern bushcraft and survival buffs.

The Didi Galgalu was made to serve this market, and it is something of a hybrid modern American fixed-blade, but with African kiaat wood instead of the dense birch Helle normally uses.

Though pretty, the kiaat handle wasn’t as durable. In hard-use tasks like chopping branches and splitting wood the handle took a number of hits, all of which were noticeable.

The kiaat was too soft for these tasks. With a G10, Micarta, or a harder wood, the handle can soak up blows with no sign of wear.

It’s not so much that I am worried about the knife being ugly or beat-up looking, I actually prefer the well-used look (the so-called Fett Effect). My real concern is that in the testing period the damage began to mount too quickly, and it wasn’t just aesthetic, there were actual deformations in the handle.

Over months of use that damage may impact the comfort of the handle and that will make the knife less useful over time. In an age when G10 and Micarta abound and offer truly superior dimensional stability, grip, and toughness, the kiaat wood doesn’t stack up as well. 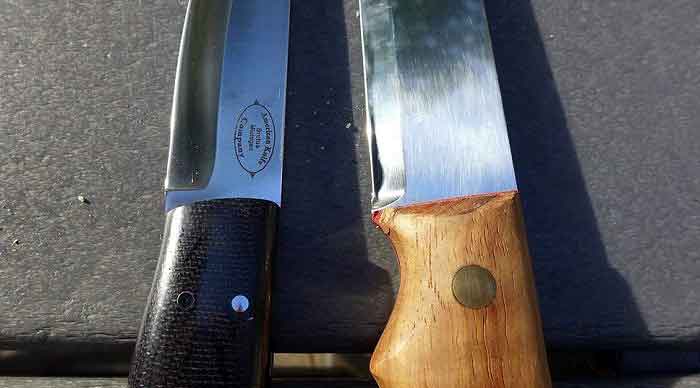 The damage was incurred during a single batonning session.  Helle’s traditional wood (birch) seems better than the wood scales here, and even it compares poorly to synthetic materials.

The normal trick used to protect the wood handle on a Sammi knife like you find elsewhere in the Helle line up is to use a brass guard. There is, as you can see, no brass guard on the Gigalu.

I would offer one caveat to this review — I live in New England and the wood is different than the wood found in Norway where this blade is made. In that climate with the greater abundance of softwoods like pine, the Gigalu might be an awesomely beefy field knife, a great compromise between a chopper and the traditional puuko-style blades Helle usually makes.

The Didi Galgalu has a very prominent indexing notch, a cut out in the handle’s shape to accommodate your index finger. The handle is also much taller than most Helle’s on account of the wider than normal blade.

These two features combine to make the Didi Galgalu’s handle in need of some improvement, in my opinion.

Human factors engineers have a concept known as affordance, where a single design allows for multiple uses. The traditional narrower and less complex Helle handle, a design borrowed from traditional Sammi design, is a model of affordance.  The photo below shows a traditional Sammi handle: 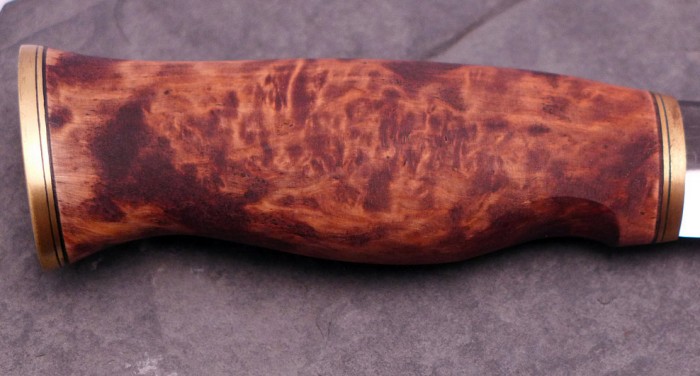 Note the generally rounded shape of the handle above.  It doesn’t demand you hold the knife in any particular direction — you can use it in multiple grips and in multiple cuts.

The Gigalu’s handle, in contrast, is less versatile. In a field knife designed to perform the widest variety of tasks of any piece of cutlery, the directing design of the Gigalu’s handle is a drawback.

There was one small issue with the blade, an issue that is probably not representative of the entire line, given Helle’s past levels of finish. The grind at the tip of the Gigalu review sample was very coarsely finished, as if the company forgot to grind the tip with the last, highest grit belt.  See image below. 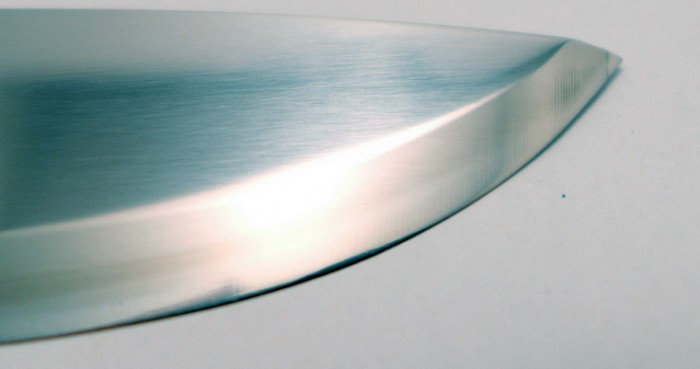 The unrefined tip had almost no impact on performance, but the rough finish stands in contrast to other Helle knives I have handled and is something I have not seen on high-end fixed blades from other companies.

Despite some pushback, the Gigalu is not a bad fixed-blade. The sheath is well made, and the blade is sharp (though I’d prefer a taller grind, one that starts closer to the spine).

The steel is well within the acceptable range (though, honestly, a bit under par — you can get 3V and Elmax, both clearly superior steels, in this price range).

Compared to other premium fixed-blades in the $200+ range, both in the Helle lineup and by companies like Bark River, LT Wright, and Fiddleback Forge, the Gigalu doesn’t come out ahead in any category.

In the end, for its price of $249, I’d prefer a traditional Helle or something from one of the other premium fixed-blade makers as my survival knife in the woods.

Up Next: CRKT Swindle: Knife Styled After ‘Riverboat Gambler’