A knife is only as good as its edge: The sharper, the better. 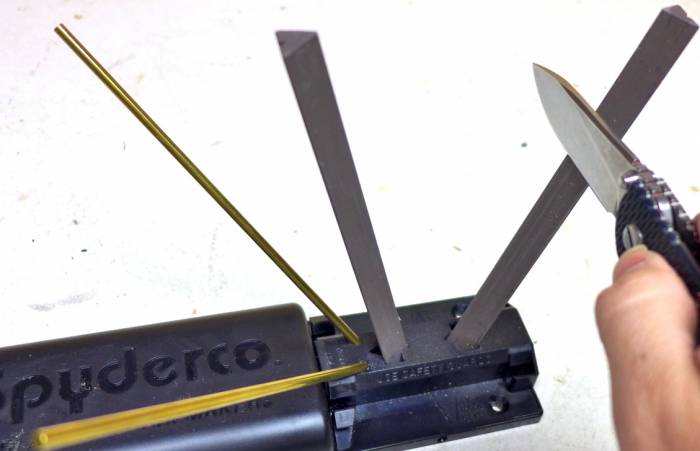 A sharp edge not only makes your cutting tasks easier, it also makes them safer. With a sharp edge, you use less force and have more control resulting in fewer accidents.

Sharpening a knife, in theory, is a very simple task. But with new steels and complex grinds, it can get difficult very quickly.  Here are a few pointers.

You can sharpen a knife with almost anything — a fancy sharpening system, the bottom of a coffee cup, your belt, or even a piece of sandstone. But the key to sharpening is understanding the angle you need and using a progressively finer material.

Eventually you will acquire muscle memory, allowing you to hold an angle relatively steady.  One way to train yourself is the “Sharpie trick”: Coat the cutting edge with a Sharpie marker and sharpen until the ink is gone.

As an experiment, for a year I sharpened my Kabar Becker BK9 with nothing other than a piece of sandstone and my belt. The sandstone acted as the coarse treatment and the belt the finer treatment. And, much to my surprise, it worked quite well. The blade didn’t look pretty (and really your big chopper never should) but it was quite sharp.

Eventually, the unevenness produced by common materials was enough to necessitate a trip to a professional. However, it worked for a year and I am sure in a survival situation, it would work even longer.

Every steel can benefit from the use of a strop. A strop is usually a piece of leather “charged” with some kind of compound, but it doesn’t have to be. In talking to folks at Triple Aught Design on my podcast, TAD’s former knife guy, Gianni Donati, swore by the use of a cardboard edge. Anything can work.

The idea behind the strop is that by passing the blade over the charged leather, the microscopic edge performing the actual cutting is realigned. The result is a sharper and easier to use knife.  A few swipes on each side of the blade is all that is needed to strop an edge.

The key is stropping regularly. With older steels, 1095 for example, the benefits are quickly seen. With something like ZDP-189, which is much harder, the benefits aren’t as shocking. Stropping is particularly helpful for convex-ground knives. The gentling curving grind is hard to match up to a perfectly flat sharpening stone, but it mates well with the give found in most stropping substrates.

A regular stropping routine and a modern high-hardness steel can help you all but avoid full re-sharpenings, which, with some high-end powder steels, can take more than an hour.

It’s been two years since I purchased my latest Dragonfly. It is still hair-popping sharp, even though it has not seen the sharpening stone.  Stropping alone did the trick.

More than anything, the important part of both stropping and sharpening is consistency. And consistency is all about practice.

Skilled sharpeners need no guides of any kind and can get razor edges from any abrasive material.  Practice on a cheap knife with soft steel, like a Buck with 420HC or a Victorinox.  Over time you will get a feel for the angle of the knife.  Once you have the “touch,” sharpening harder steels is just a matter of more repetition. 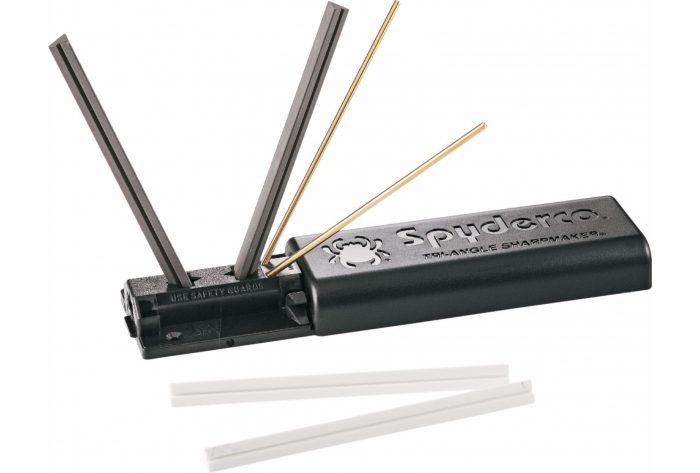 Some knife sharpeners help users maintain a proper angle. These systems are great for beginners or people that need to batch out edges.  However, as sharpeners get more expensive, all they do is help hold a consistent angle with guides, braces, and rulers.

Something like the Apex Pro or the Wicked Edge is nothing more than a series of braces and rigid arms designed to hold an angle to the edge that is exactly the same over and over again.

Prior to diving into high-end systems, I would recommend something like the Sharp Maker from Spyderco or the Lanksy system. They may not tune the blade to a thousandth of an inch, but they have enough consistency to get good results.

If you absolutely need that high-end edge, one capable of reflecting newsprint, then you probably need to upgrade beyond these two systems. But that gleaming edge adds more appearance than performance.

In the end, the best grinders don’t use a system at all. Jesse Jarosz and Murray Carter, two custom makers, put the final edge on their knives by hand. I’ve seen an expert shave with an axe and fillet a piece of paper, both after freehand sharpening.

For mere mortals like us, the best treatment is a pair of strops with two different grits of compound and either a Sharp Maker or Lansky. With those tools, a good routine, and some practice, you will have sharp blades forever.

Eventually, with experience, you will come to learn a great deal. Nothing shows you the soul of a steel like sharpening it.