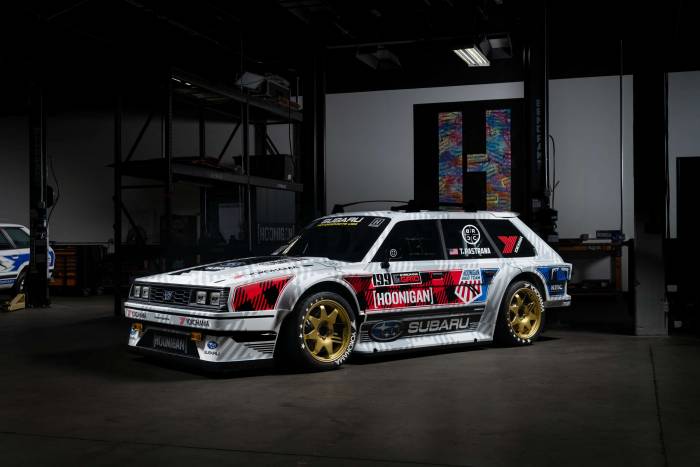 A 1983 Subaru GL with 862 horsepower and active aero is ready to launch at the Goodwood Festival of Speed.

The latest AWD monster creation for Hoonigan’s “Gymkhana” series is a classic Subaru. It’s called the Family Huckster, and it’s a 1983 Subaru GL Wagon that’s been massively reworked to make 862 horsepower, with active aerodynamics, carbon fiber bodywork, and retro-style wheels meant to look like the originals.

Hoonigan’s “Gymkhana” series of rally and drift videos is now 14 years old, meaning it’s almost ready to learn to drive on its own. This installment in the sideways video series, the 12th, is a bit of a return to the brand’s roots.

The series started in 2008 with driver Ken Block tossing around a Subaru — a 2006 Impreza WRX STI. Hoonigan and Block switched to Ford for a few years, with icons including a series of ever-wilder Fiesta models, the 1965 Mustang Hoonicorn, and the 1977 F-150 Hoonitruck.

Block retired from the series for the last installment, passing the torch to long-time rival Travis Pastrana. Pastrana took that torch and did donuts all over it with a Subaru STI called Airslayer.

What’s Cooler Than a Rally Wagon?

Ok, back to the new one. The Family Huckster, a play on the Family Truckster station wagon of National Lampoon’s “Vacation” movies, started life as a 1983 Subaru GL wagon.

The original wagon came with a 1.8L flat-four that made somewhere around 73 horsepower. That engine has been mercifully scrapped. In its place is a much more modern Subaru boxer four that makes 862 horsepower and has a six-speed sequential gearbox.

That’s the same power as last year’s Airslayer, but Hoonigan didn’t get into the details of the engine build.

The car has a World Rally Championship specification suspension with extra long travel to make sure it is fully ready for rally car duties. The differentials under the car come from Pastrana’s own racing endeavors, with lessons learned from a record-setting run at the 2021 Mt. Washington Hill Climb,

Family Huckster wears a fully custom carbon fiber body that’s installed over a tubular space frame. So there’s not much actual Subaru GL in the mix. To help add some more original character, Subaru fitted an original GL radio into a recreation of the GL’s dashboard. The digital dash cluster gets retro gauges as a nod to the electric dashboard of the original as well.

Travis Pastrana talks about the car in his own words:

The GL wagon is an iconic Subaru that I thought would be pretty rad to see flying through the air. Surprisingly, the Family Huckster is a lot smaller than the Airslayer. Combine that with the boxy shape and you have a perfect recipe for next level precision driving. An active rear wing is helpful to an extent but the 83 wagon flies about as well as you would imagine…kind of a like a brick. This makes the jumps way more sketchy but also more entertaining and less predictable. The Family Huckster is without a doubt my all time favorite vehicle to drive. Can’t wait to show the world at Goodwood and later this year in the next “Gymkhana.”

Active aero devices fitted to the Huckster include an electro-pneumatically controlled rear wing. There are also hydraulic flaps on the fender flares that can be run on automatic or manual. They work by helping to balance the car, and yes that even means in flight.

Pastrana will debut the Family Huckster at the Goodwood Festival of Speed on June 23-26. The most elegant tribute to going fast includes a hill climb up the Duke of Richmond’s driveway (it’s a really good driveway) along with a dedicated rally stage.

After Goodwood, the car will become the hero in the next installment in the “Gymkhana” series. Pastrana says to expect that action stunt film later this year. 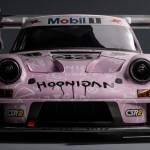