The 2019 Chevy Blazer debuted last night at a press conference in Atlanta, Ga. It for sure isn’t what a lot of adventure seekers wanted in the Blazer reboot. But it should sell well to the masses.

I, for one, dreamed of a Chevy Colorado ZR2-based SUV that would be off-road capable, durable, and offered with an efficient small diesel engine. The Blazers of yesteryear offered a selectable 4WD system and body-on-ladder-frame construction.

What the new Blazer does have is a ton of creature comforts, a bold look (that’s decidedly unlike the Blazer we know), and lots of modern tech. The 2019 Blazer is a crossover SUV that slots in between the Equinox and Traverse in the Chevrolet lineup.

It’s nothing like the Blazer of the past. I really wanted Chevy to give us a rad, modernized version of the sweet little truck below.

What it gave us is another four-door crossover. It’s probably a great car. And it looks like every other crossover. It’ll do great on the highway. Gravel roads will be fine. Just don’t take it any farther off-road than you’d take a Subaru Outback. 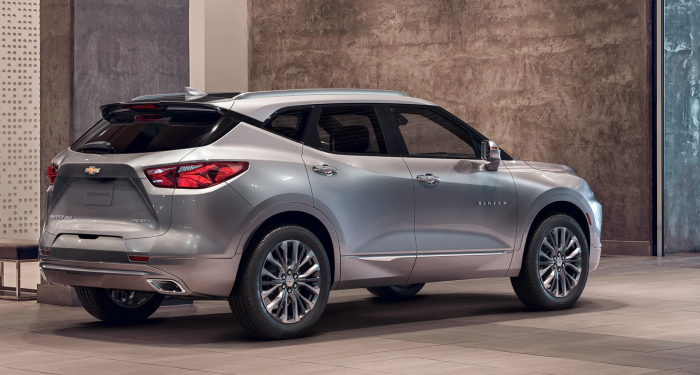 So, why do we care? Well, the Blazer holds a fairly iconic place in the American automotive market, and It’s been gone for more than a decade.

We haven’t seen a new Chevy Blazer on the market since 2005. The Blazer has always represented the go-anywhere ruff-and-tumble SUV in the Chevrolet vehicle lineup. History of the Blazer shows body on frame construction, selectable 4wd with low range and a 2-door option.

You won’t see any of that DNA in the new Blazer.

Early Blazers even offered a removable roof. The 2019 Blazer doesn’t offer that. It does offer an optional panoramic dual-pane power sunroof. For sure not the same, but at least you get a good view of the sky.

The new Blazer will be built in Mexico, which could cause it some issues with the current political climate on foreign-made goods. The original Blazers were all made in US manufacturing plants, in Ohio, New Jersey, and Michigan. All of those original Blazer plants have long since closed.

Sure, the 2019 Blazer has an aggressive look. It has sharp muscular lines, a wide stance, and bold proportions. It is squarely aimed at a younger audience that wants the room and comfort of an SUV, but not a traditional bland soccer-mom crossover.

But again this isn’t the Blazer we all yearned for. Instead, it’s the one we knew we’d probably get.

Most of its looks are derived from its competitors and siblings. The front of the 2019 Blazer looks like a mashup of a Chevy Camaro and Lexus RX crossover. The side profile lines are very similar to a Toyota RAV4 and Hyundai Santa Fe, but with bigger proportions and straighter lines. The rear view of the new Blazer looks like a stylized Hyundai Santa Fe, with elements borrowed from the Chevy Traverse.

None of these design queues are bad, as they are some of the best elements of the competition out there. They do combine to give the new Blazer some impressive attitude, which is most certainly Chevrolet.

However, they don’t particularly help the Blazer stand out in the crowded crossover SUV market.

Three models of the 2019 Blazer were announced at the press conference – a base model with a 2.5L inline 4-cylinder and two up-level models offered with an optional 3.6L V-6 engine. The RS is the bold aggressive red and black model at the launch, and the Premier is the silver and chrome accented luxury model shown.

Unfortunately, no off-road or adventure-oriented models were shown or announced. 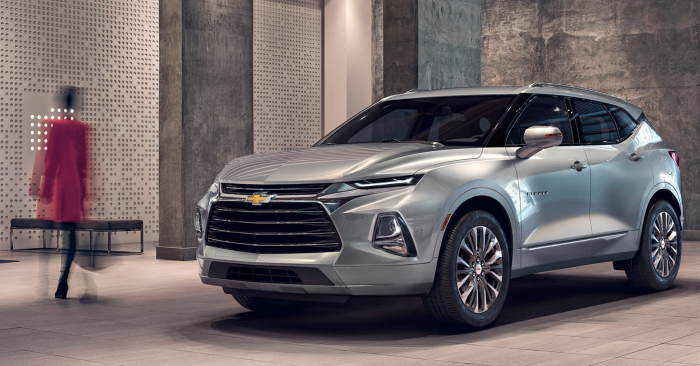 Both engine options are backed with a 9-speed automatic transmission and offer start-stop technology. The V-6 offers an impressive 305 horsepower. The optional AWD system offers a driver-selectable FWD mode, which should help improve everyday fuel economy.

Comfort and tech are paramount in this new Blazer. You get an 8-inch color touchscreen infotainment center. It offers up 4G LTE Wi-Fi, Apple CarPlay, and Android Auto. You also get a wireless charging area and up to 6 USB ports.

To top off the impressive tech you get available “comfort-open” windows. This feature allows you to open all the windows remotely from the key fob, so you can let out all the heat before entering the vehicle.

You can even get an automatic heated steering wheel and heated and cooled front seats. These options can be used to adjust the interior comfort and climate of the vehicle remotely before you ever get in. Rear seat passengers are also well taken care of in the new Blazer. They get optional heated fold flat seats, which have a lot of adjustment and slide 5.5-inches.

The new Blazer also offers a Chevrolet-first Cargo Management System, standard on RS and Premier models. It features a rail system and cargo fence to help secure smaller items by dividing the cargo area. This should be handy when securing and organizing all your adventure sports gear in the back. 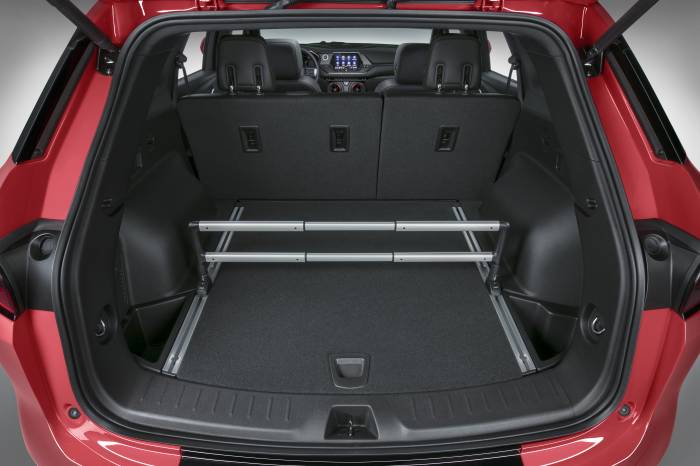 Chevrolet touted a “paddled knee area” as a feature on the new Blazer. I’m honestly not sure why this feature was promoted. Is the driver foot well so cramped that tall people need paddling for their knees? This is something I look forward to investigating more after a first drive.

I, as well as most, fully understand the why Chevy made this the new Blazer. To meet fleet emissions standards and appeal to the masses modern vehicles, at least those that are going to sell in volume, must be unibody design with independent suspension and have small, fuel-efficient engines.

There are maybe two vehicles, which aren’t trucks, on the US market that have bucked this trend. The Jeep Wrangler and the Toyota 4-Runner, both offering body-on-frame construction, and the Wrangler front and rear solid axles. The 2019 Blazer is squarely oriented to compete against the likes of the Jeep Grand Cherokee, not the Wrangler or 4-Runner

Will Ford respond with a Bronco that meets our adventuring needs? We honestly don’t think so. But we will hold our breaths just a little until official information is released.

More details with pricing and options on the 2019 Blazer should be released in the fall. Vehicles will start hitting dealers nationwide in early 2019.

Up Next: Why Must You Tease Us? The Awesome 2019 Suzuki Jimny We Can’t Have

Saving…
Why Must You Tease Us? The Awesome 2019 Suzuki Jimny We Can’t Have
Electric VW Crushes Pikes Peak Hill Climb Record
×