Mitsubishi enthusiast Andy Lilienthal checks in with a deep dive into what the new Outlander is all about.

Mitsubishi needs a hit. It needs a vehicle that gets on buyers’ radars not because it’s all they can buy, but because it’s something they want to buy. From early reports, the 2022 Mitsubishi Outlander CUV might just be that vehicle. In fact, it might be the best Mitsubishi in years.

Based on the same platform as the new-for-2021 Nissan Rogue, and sharing its 2.5L engine and CVT “gearbox,” the all-new 2022 Outlander offers a different level of uniqueness compared to its Nissan cousin. Remember, Nissan and Mitsubishi are now under the same umbrella (Renault-Nissan-Mitsubishi Alliance), so it shouldn’t be much of a surprise to see Nissan DNA transitioning into Mitsubishi models.

When I reviewed the 2021 Nissan Rogue, I found it to be very good. So, it’s no surprise that the 2022 Mitsubishi Outlander is not only the nicest vehicle to wear a Mitsubishi badge in some time, but it’s also very good for its segment, too.

My tester was an SEL trim level with the company’s S-AWC (Super All-Wheel Control) all-wheel-drive system. At first glance, it’s immediately apparent that the Outlander doesn’t look like every other crossover on the market, especially from the front. The company’s Dynamic Shield corporate styling is in full effect. 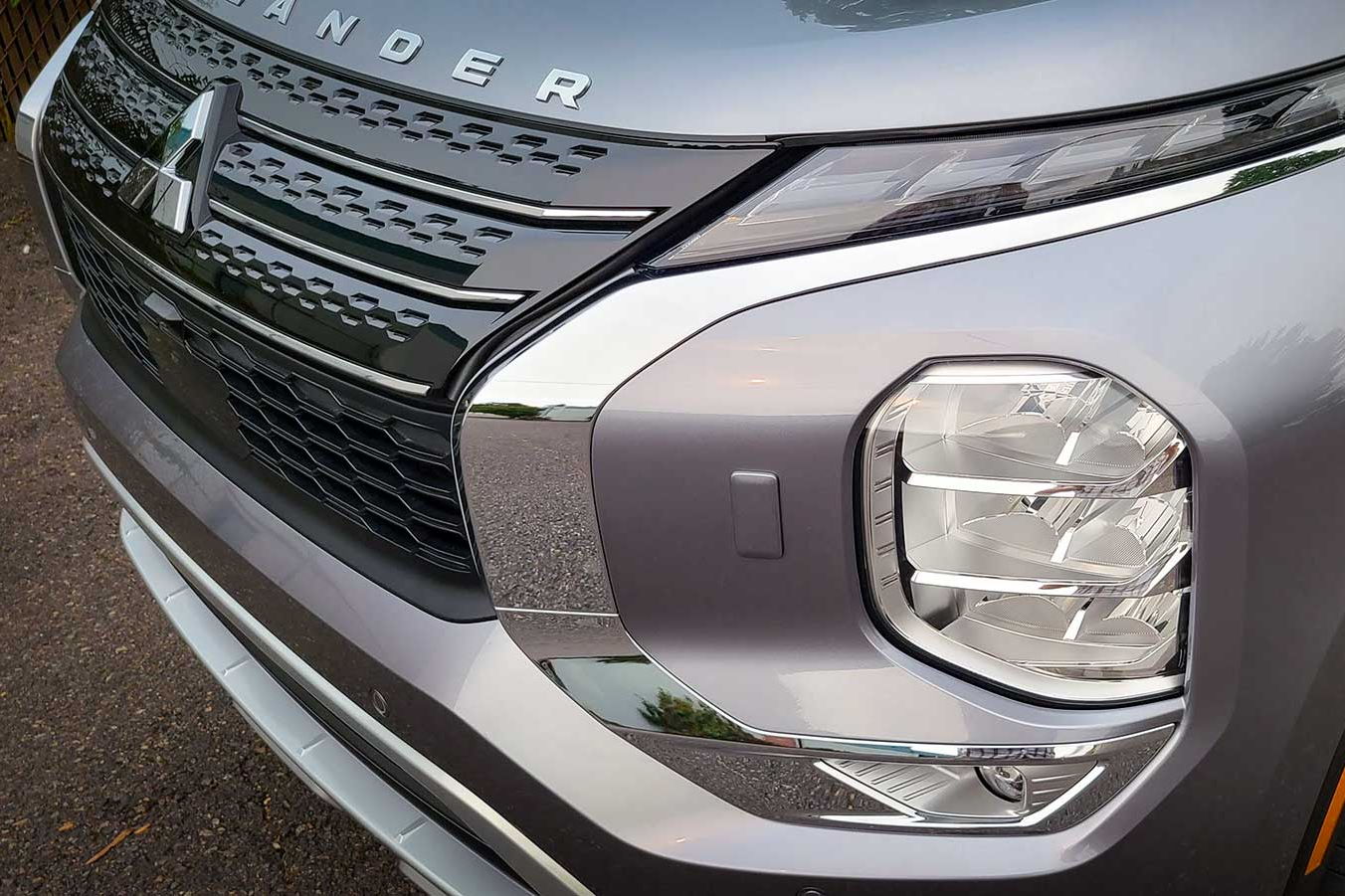 The 2022 Mitsubishi Outlander gets slit-like running lights where traditional headlamps would be, while the actual headlamps are below. The shape is muscular and blocky but still modern. The high beltline accentuates this appearance, while a floating roof appears at the rear C-pillar. The overall look is handsome if not a bit polarizing, although not offensive. 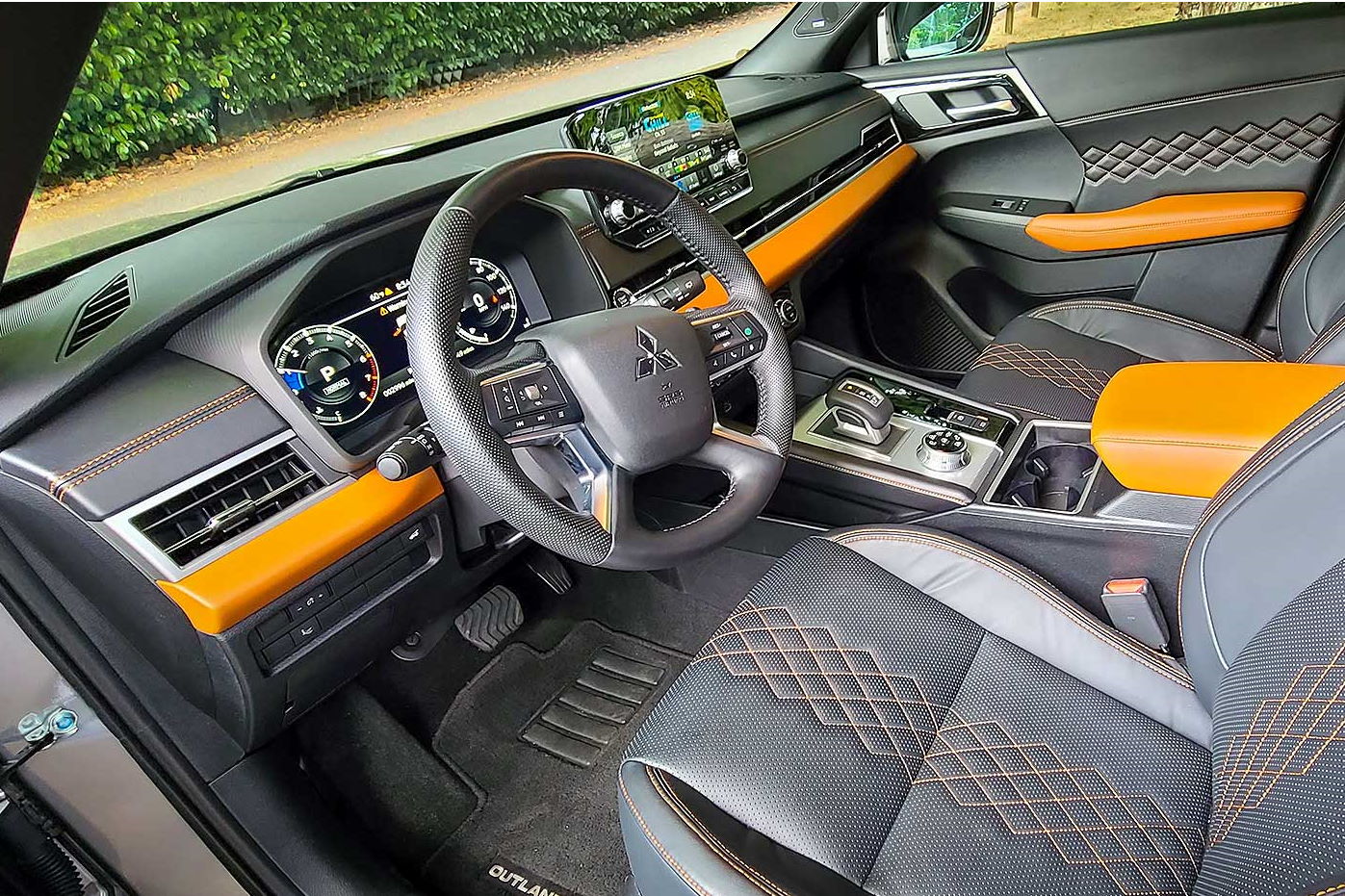 The Outlander’s interior is its strong suit and my favorite feature. I don’t remember if I’ve ever referred to any Mitsubishi interior as gorgeous before, but there’s a first time for everything. Indeed, the black upholstery with orange accents is fantastic.

It’s modern, forward, stylish, and comfortable. There are a few parts-bin items from Nissan, but much of this is dedicated to Mitsubishi. This is not just a Rogue with a different badge! This is the best Mitsubishi interior in eons.

The heated front seats offer ample support and have very interesting orange stitching that looks high-end. The silver-and-black center console has a unique gear selector that takes some getting used to, as it’s not your typical PNRDL layout.

Behind that is a dial allowing users to switch through the six different drive modes: Eco, Normal, Tarmac, Dirt, Snow, and Mud. Each of these modifies the vehicle’s S-AWC performance. When switching between the driving modes, you’ll also see a full-color picture of the Outlander in different scenes on the gauge cluster. 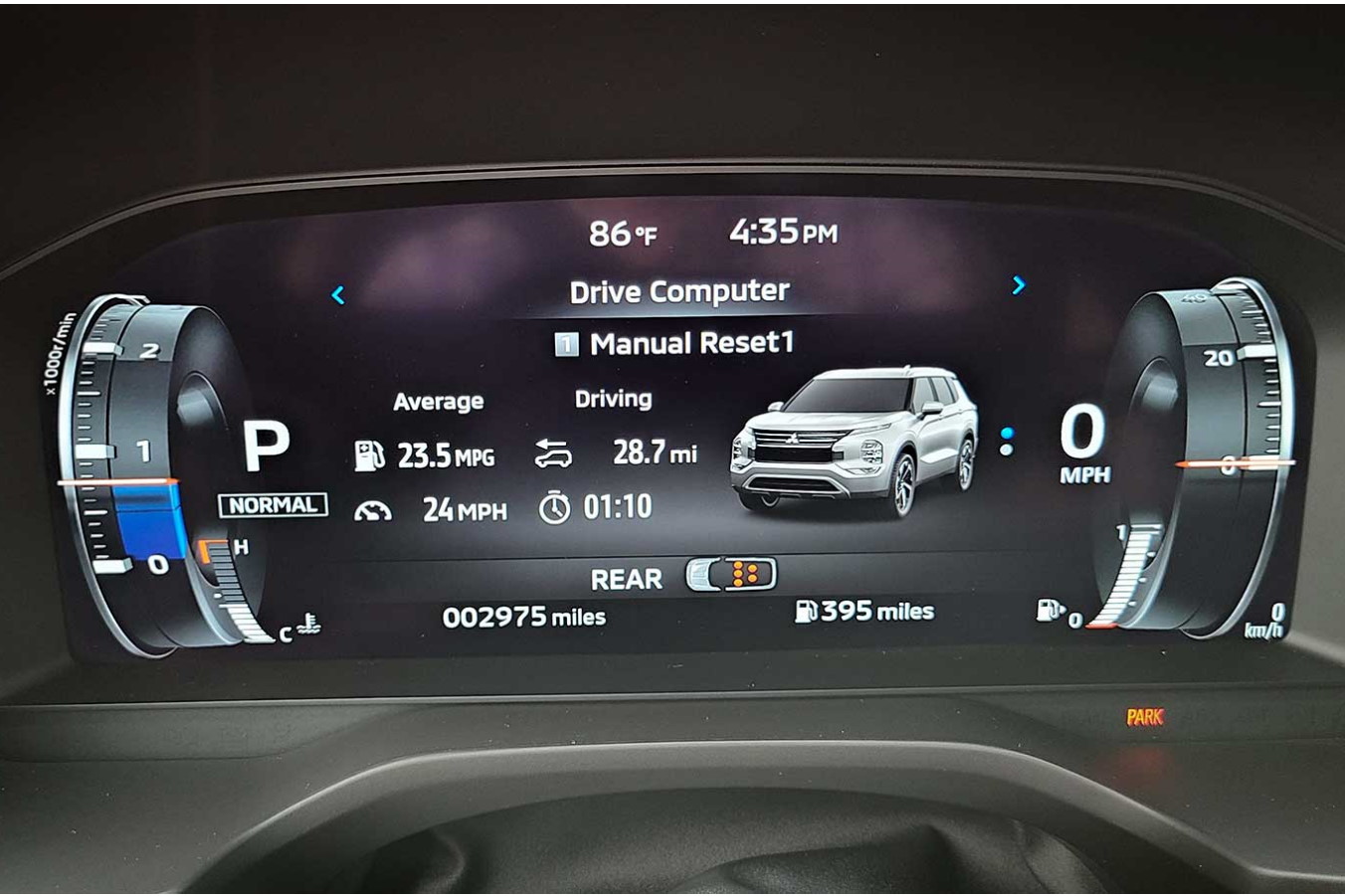 Speaking of which, the bright, full-color gauges are fantastic. They can also be customized for different looks, including some that I’ve never seen before. One mode makes the speedometer and tachometer into unique dials that move sort of horizontally versus in a circular fashion. It’s pretty wild.

The whole thing yields a very upscale feel — not something most people are accustomed to in a Mitsubishi. But, without a doubt, this is a very nice interior, not just for the money but for any vehicle in general. 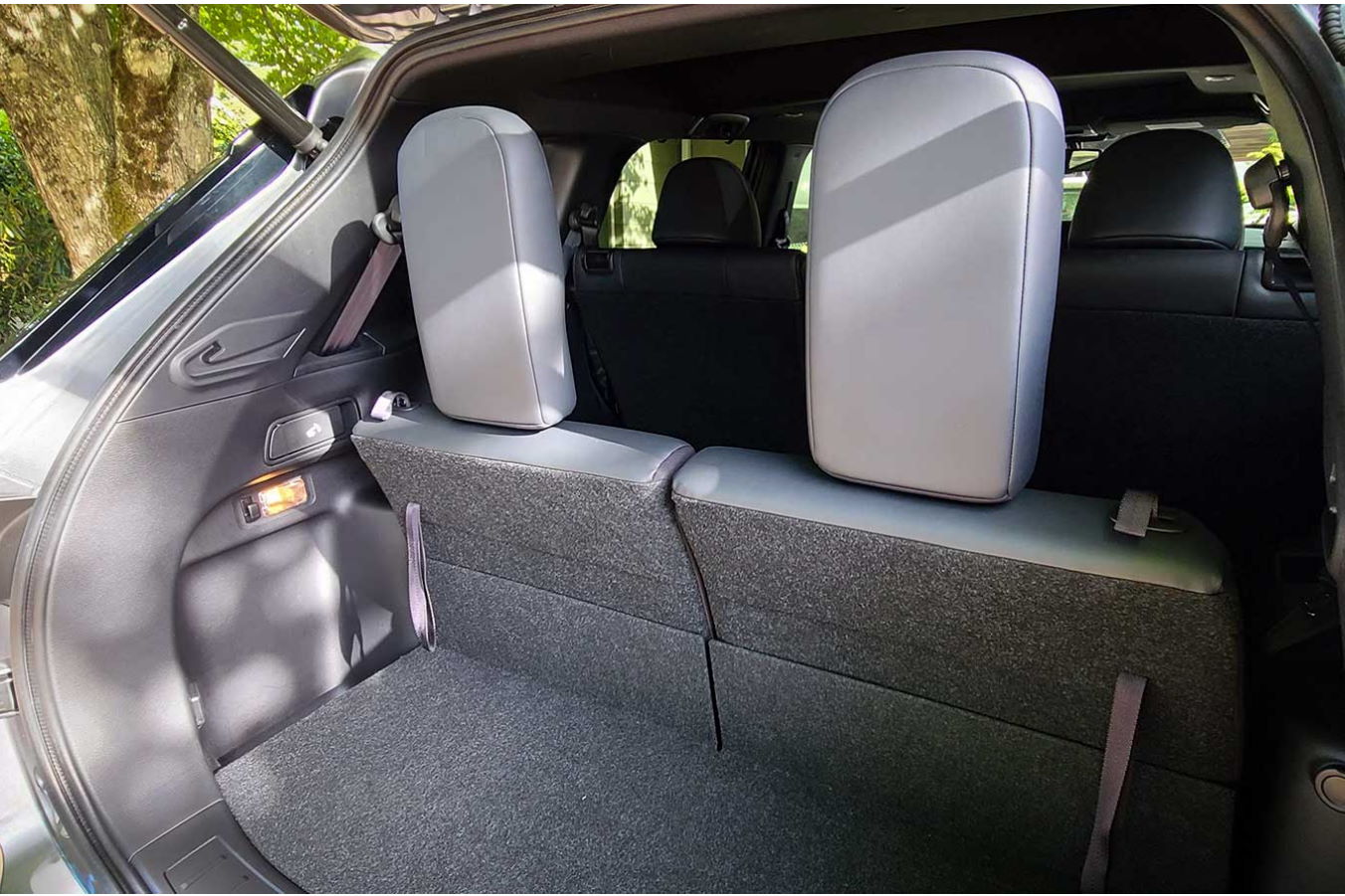 Unlike its cousin, the Nissan Rogue, the 2022 Mitsubishi Outlander offers three rows of seats, which means seating for seven. Granted, as with many third rows, the back row is best reserved for children or people who you don’t like.

The middle row slides forward to provide at least some legroom for that last row. Fold it down, and you’ve got generous cargo-carrying capacity. There is also a very clever compartment that stores the third row’s headrests as well as the tonneau cover for the cargo area.

The middle-row seat room is good, plus there are USB ports, heated rear seats, and separate rear HVAC controls. I very much enjoyed the panoramic sunroof. The retractable rear window shades also added to the upscale feel.

Going up front again, the driving position was comfortable and upright. The large, high hood made it somewhat difficult to see the Outlander’s corners — a styling trait becoming more common on automobiles these days.

Good Tech Where You Want It

Some other Nissan DNA that’s come over to the 2022 Mitsubishi Outlander is the wonderful 360-degree outside camera. This did help with the high hood when parking and is a feature that every automobile should have, in my not-so-humble opinion.

The 12.3-inch driver screen (gauge cluster) paired with the 9-inch center stack screen means lots of info. However, it’s also intuitive and easy to use. Plus, it looks fantastic. 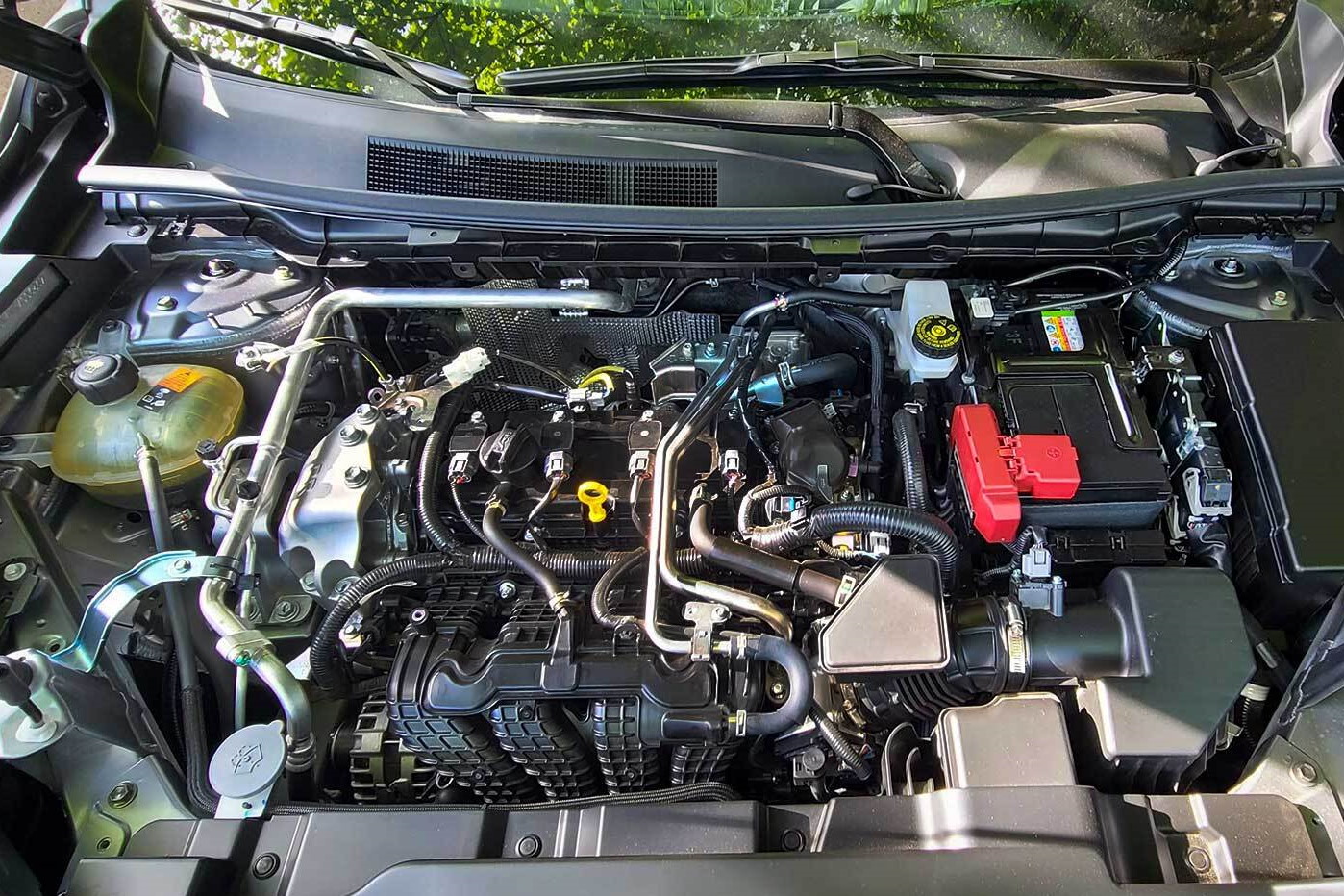 As mentioned, this CUV shares Nissan’s 2.5L four-cylinder PR25DD engine with direct injection making 181 horsepower and 181 pound-feet of torque put through a CVT — the only available engine/transmission combination.

Power is adequate, but not gusty. When merging, you’re oftentimes wringing every last pony out of this powerplant. The Outlander is EPA rated at 24 city, 26 combined, and 30 highway mpg. The PR25DD offers up smooth power, and the CVT is one of the better ones I’ve driven.

I’d love to see another 20 to 50 horses to make this more competitive against more powerful cars in this class. With the company’s rally racing heritage, this isn’t the best that Mitsubishi should be able to muster. Regardless, a revised PHEV variant should be coming soon, which will replace the recently updated 2021 Outlander PHEV.

On the highway, the car was quiet with minimal wind noise, and the ride was comfortable. The Outlander’s steering felt twitchy and overboosted. More notably, the brakes felt a bit strange. As I applied the brakes, it felt like they grabbed harder as the Outlander slowed down. It was weirdly nonlinear. 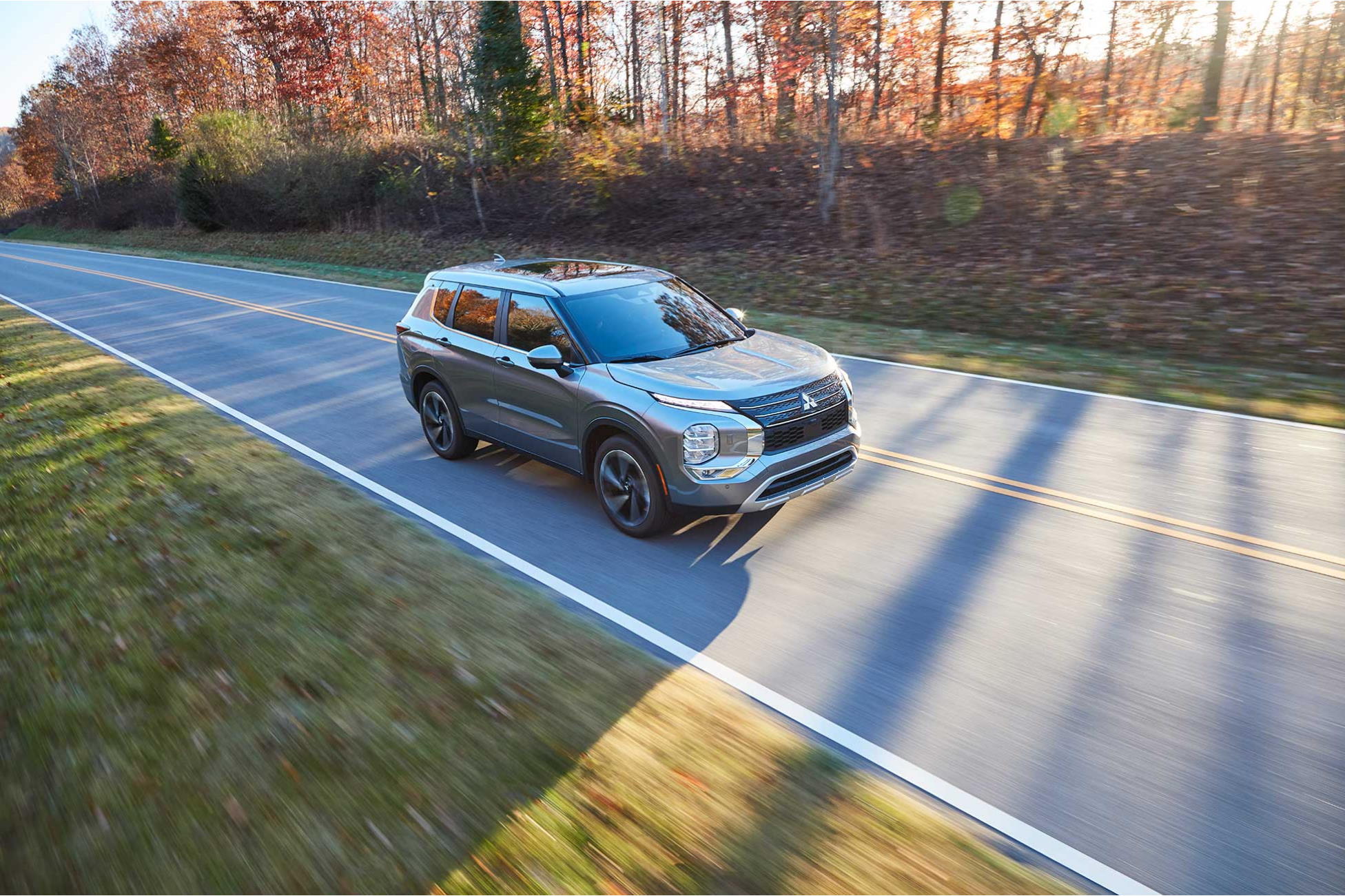 This 2022 Mitsubishi Outlander SEL rides on big 20-inch wheels wrapped in 255/45R20 Bridgestone tires. Handling was better than expected. Though not a sports car, like the Rogue I tested, the chassis was surprisingly willing to take on twisty bits, and I could actually have quite a bit of fun on curvy roads.

Add to that Mitsubishi’s sophisticated S-AWC (Super-All Wheel Control) handling, and you’ve got a nimble, confident vehicle whether on the tarmac or in snow, rain, or dirt. The various drive modes also aided in this.

While I didn’t get a chance to drive the Outlander on anything other than tarmac, Mitsubishi’s S-AWC system is a good one, and it’ll likely be great in foul weather.

Not Outlandishly Priced, With an Outstanding Warranty

The 2022 Mitsubishi Outlanders starts at $25,795, and the SEL with S-AWC was $37,995. This is pretty much on par with other crossovers in its class, although some others are more powerful. Mitsubishi does have an outstanding warranty: 5-year/60,000 miles bumper to bumper and 10-year/100,000 powertrain.

This should help instill confidence in buyers who perhaps thought Mitsubishi was no longer selling cars in the U.S. or was on its way out. Needless to say, the company continues to grow in sales and is likely not going anywhere. 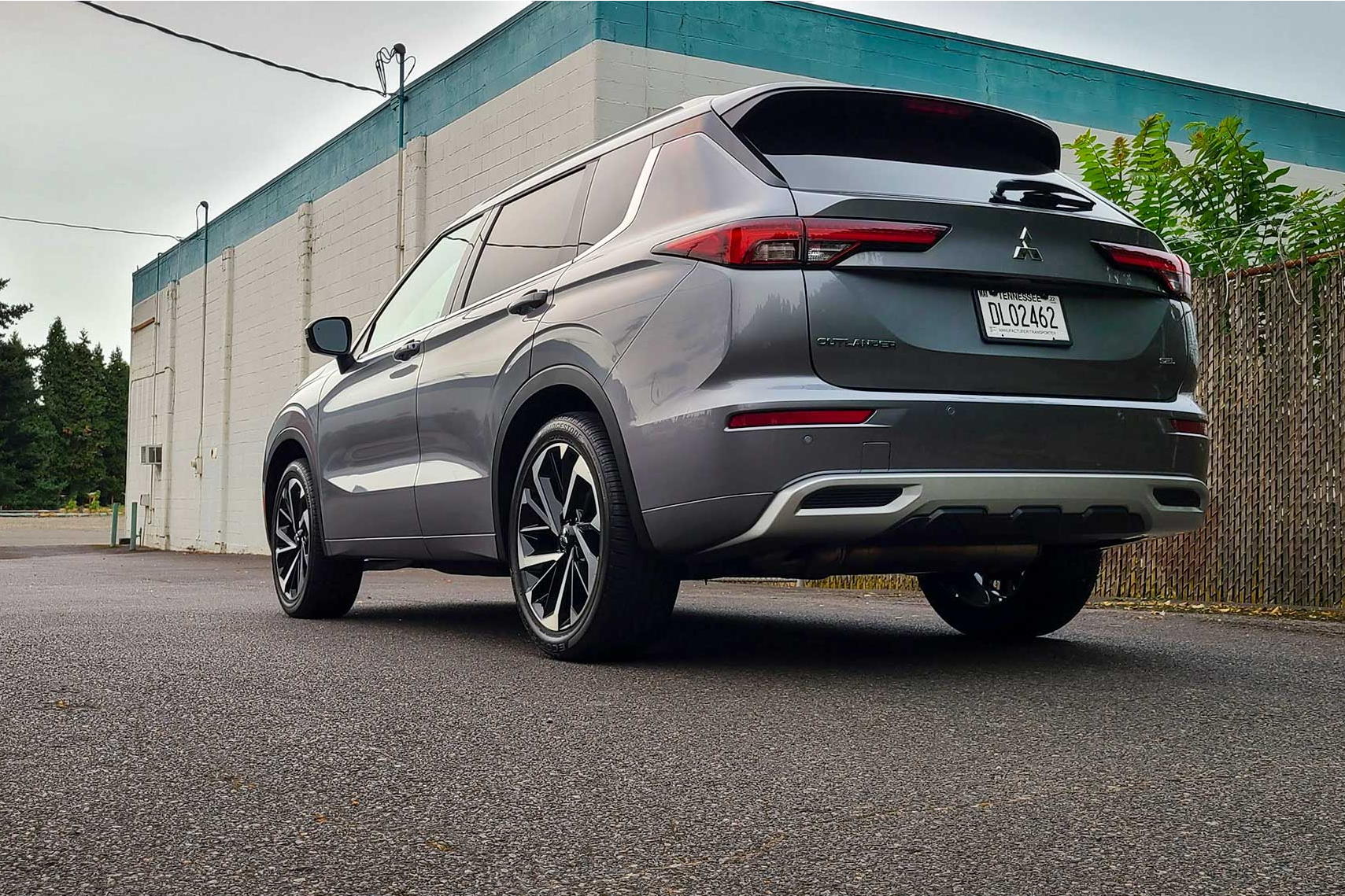 Overall, the 2022 Mitsubishi Outlander was easy to drive, had great visibility, and handled confidently. The looks are polarizing, perhaps. I had multiple neighbors come over to tell me they liked the Outlander’s looks, and one thought it looked like a Range Rover (I can see that too). I think it’s a great first step to getting new blood into Mitsubishi dealers — something the brand needs.

There will be an Outlander competing in the 2021 Rebelle Rally with livery similar to a Dakar Rally-winning Mitsubishi Pajero from the 1990s. This is great because even as the brand recognizes its storied past and its connection with its legacy owners from the 1990s, it still has an eye on the future.

This vehicle may be the first fruitful result of the partnership between Nissan and Mitsubishi and, hopefully, it is a sign of good things to come.

I can tell you this: The Outlander is by far the nicest, best Mitsubishi vehicle the company has offered in decades. And not only is it “nice for a Mitsubishi,” it’s nice for any vehicle.

And while it’s not the most powerful, its interior is at the top of the class. Pair that with versatility and a great warranty, and the new 2022 Mitsubishi Outlander has a lot going for it and should be on your CUV shopping list.

A rare 1988 Mitsubishi Delica has hundreds of custom features and modifications — maybe more than any other van of its kind in the world. Read more…