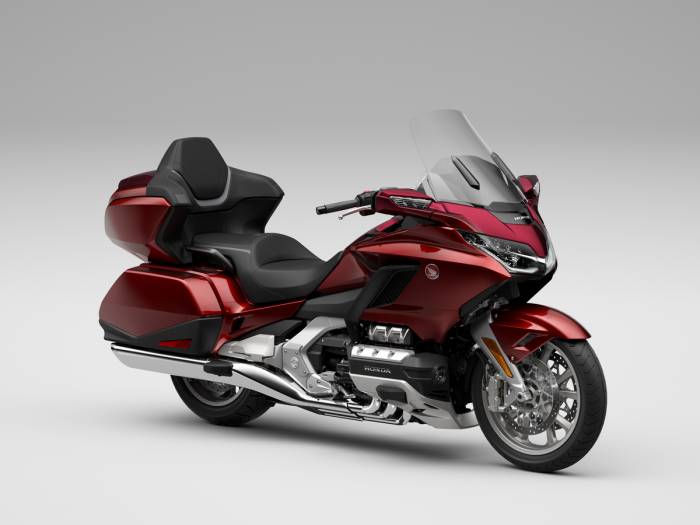 In its latest updated version, the 2023 Honda Gold Wing continues to set the benchmark in the high-end luxury cruiser market segment.

Few popular models ever attain iconic stardom like the Honda Gold Wing. With the 1974 GL1000 launch, Honda invented a new category with its then-999cc flagship touring motorcycle, which quickly became the gold standard for the industry.

The Gold Wing soon gained a large following. Its loyal fans praised it for its unequaled comfort, maintenance-free shaft drive, and über-smooth, ultrareliable engine with phenomenal longevity never seen before in the motorcycle industry.

Over the years, the Honda Gold Wing evolved but stayed true to its nature. The seminal flat-four engine cylinder capacity powered the GL1000 and grew with each new generation. The fourth-generation GL1500 saw a major change after introducing a flat-six configuration in 1987, evolving into the GL1800 in 2001.

The 2023 model is a slightly updated version of the 2018 GL1800. It is still powered by that same world-class 1,833cc horizontally opposed, flat-six engine that runs as smooth as butter. It produces 125 horsepower and 130 pound-feet of torque without any noticeable vibrations, earning it the Magic Carpet nickname.

The DCT has a convenient Walking Mode function that allows reversing slowly at 0.75 mph or crawling forward at 1.1 mph. This feature greatly facilities maneuvering the big Gold Wing in or out of a tight spot. A Hill Start Assist function aids starting from a stop on an ascent.

Thanks to the flat cylinder configuration, the Gold Wing has impressively agile handling. An extremely low center of gravity is the key here. The motorcycle has surprisingly nimble steering when you consider it weighs in at 804-853 pounds, depending on the version.

Its aluminum twin-spar frame is designed to combine the diametrically opposed characteristics of rigidity and flex. This is aimed to achieve optimal balance between stability, steering precision, and comfort to ensure a confidence-inspiring, silky-smooth riding experience.

The ABS-equipped combined braking system provides outstanding stopping power. This is thanks to the radially mounted six-piston dual front-brake calipers and a single three-piston rear-brake caliper.

The 2023 GL1800 is loaded with state-of-the-art electronics aimed at delivering a superior riding experience. Short of an autonomous self-riding Autopilot system, the GL1800 is a marvel of innovative electronic rider aids and engine, brake, and suspension performance-enhancing control systems. Combined, the electronic systems enable riders to tailor their experience to specific conditions, thus enhancing comfort and safety.

Although a Gold Wing is probably easy to spot, Honda has equipped the GL1800 with a Vehicle Viewfinder System to enable forgetful owners to find their prized possession in a large parking lot … or perhaps for locating and retrieving their stolen steed.

The user-friendly Smart Key for keyless starts and bag access is a welcome feature. The motorcycle has a preinstalled sound system with an XM radio antenna and automatic volume adjustment.

Integrated connectivity allows riders to use their smartphone apps to make phone calls, send messages, listen to music, and use sat nav apps through Android Auto and Apple CarPlay compatibility.

The 9-inch TFT touch screen lets the rider view and use the audio and navigation apps and adjust the electronic rider-aid systems. An important new safety-enhancing function displayed on the touch screen is the real-time status of the Tire Pressure Monitoring System, which warns the rider when the pressure drops below a threshold level.

With its unmistakable style, the 2023 GL1800 stands out from the crowd. Its unique design combines wind protection/aerodynamics, airflow and heat management, and ergonomics into probably the most comfortable long-distance luxury cruiser package currently on the market.

In line with the ample dimensions of the two-piece seat, the luggage capacity is generous, with 30L storage in each of the side panniers and 60L storage for the top case. A large passenger backrest offers increased comfort on long rides.

The rider controls the airflow by adjusting the height and angle of the electric windscreen as well as the opening of the air ducts in the fairing. The position of the airbag collision-judgment system is optimized near the center of gravity.

Given its state-of-the-art technology and the many features of its four different trim levels, the 2023 Honda Gold Wing GL1800 undoubtedly retains its leadership position at the top end of the luxury cruiser market, once again resetting the bar higher for its competition.

Starting price for the 2023 Honda Gold Wing is $25,600. The refreshed bike should hit U.S. dealerships this November. 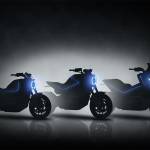 Honda is coming out with 10 new electric motorcycles. Its goal is to sell 3.5 million e-models annually by 2030. Read more…