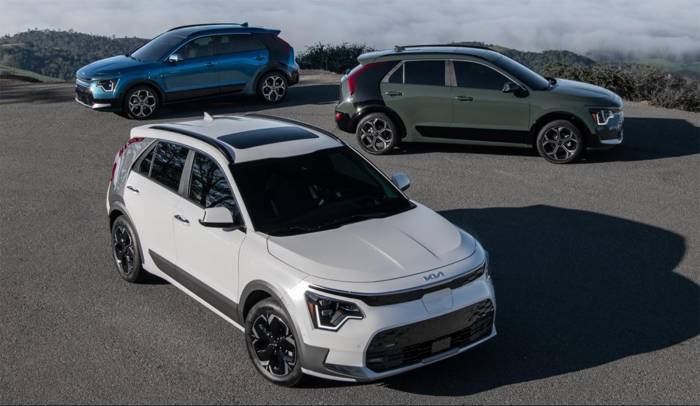 The 2023 Kia Niro gets notable improvements in all three drivetrain configurations. And the 53mpg EPA rating is a big draw for Earth-savvy consumers.

The Kia Niro offers what you might think of as three distinct personalities. Buyers can choose one of a trio of battery-based drivetrains: a conventional hybrid, a plug-in hybrid, and a pure electric variant. The latter is a more affordable way to get into a zero-emissions vehicle than the Korean carmaker’s EV6.

An all-new version of the Niro is just rolling out for the 2023 model year and GearJunkie headed out to San Diego to check it out.

Think of the Kia Niro as three different vehicles in one. It’s among only a handful of products that offer three distinctly different takes on battery power.

The base model is a conventional, albeit highly fuel-efficient, hybrid. The plug-in model is even more energy efficient while adding up to 33 miles of all-electric driving range. For those who want to abandon internal combustion power entirely, there’s the Kia Niro EV, which delivers an EPA-estimated 253 miles per charge.

First introduced 7 years ago, the compact crossover goes through a major makeover for 2023, and the numbers tell a compelling story. Mileage and range have been improved, for one thing. And the Niro grows larger in virtually all dimensions, including passenger and cargo space.

Now add an updated design that includes a distinctive “Aero Blade” meant to enhance Niro’s aerodynamics. And, lest we forget what so many of today’s buyers are looking for, there’s plenty of new technology, including a 10.3-inch infotainment touchscreen and the ability to update most onboard software using smartphone-style, over-the-air updates.

Plenty of Options to Choose From

As more and more American motorists opt for electrified vehicles — whether to save money on fuel or to be kinder to Mother Earth — Kia is optimistic that the second-generation Niro will gain new fans. It’s particularly enthusiastic about how buyers will greet its two plug-in models, including the base PHEV starting at $33,740 plus a $1,295 delivery fee.

The automaker has yet to reveal figures for the Niro EV. During a September drive event, Product Strategy Manager Mark Savino suggested it will come in at a “more attainable price point than the Kia EV6.” The outgoing Niro EV starts at $40,385, including delivery fees.

To get a feel for the 2023 Kia Niro — make that Niros, plural — I caught a flight to San Diego, where I spent a long day jumping in and out of the three different versions. Each had a distinctive personality and unique details.

The HEV is fitted with a conventional shifter, for example, and the PHEV has an electronic controller. Both share a six-speed automatic. But, like most battery-electric models, the Niro EV has a single-speed gearbox. And what initially looked like steering wheel-mounted paddle-shifters actually control the level of brake regeneration.

All three share the same dimensions. The 2023 Niro grows to 174 inches nose-to-tail, with a 107.1-inch wheelbase. Cargo capacity is now up to 22.8 cubic feet. The automaker pointed out the crossover now has an additional 8 cubic feet of passenger space as well as 50% more cargo room than the Tesla Model 3.

The three also generally share the same exterior styling, which uses what Kia describes as its “Opposites United” design language. There’s more of an emphasis on aerodynamic details in the gen-2 Niro — a logical move considering how that impacts mileage, electric range, and performance. On average, the 2023 models yield an impressive — though far from benchmark — drag coefficient of 0.29.

One notable difference is the use of a sealed grille on the Niro EV. With many key powertrain components, including the battery pack, mounted under the load floor there’s no need to flood air into the engine compartment. Meanwhile, Kia has fitted a small “frunk,” or front trunk, under the hood.

All three Niro versions feature upswept LED daytime running lamps and, in the rear, boomerang-shaped LED taillights. The HEV and PHEV models feature black cladding on doors and wheel arches. The EV gets Steel Gray or black exterior trim depending on body color.

The “Aero Blade” is easily the most distinctive new feature and something that might bring to mind the Audi R8. Both use the fundamental concept to carefully channel air around the back end to reduce turbulence immediately behind.

Depending on the market, the Aero Blade can be painted in a variety of different colors — though we Americans will initially have only black and gray options.

Inside, as I earlier noted, you’ll find a handful of differences between the three Niro packages. But the overall look is contemporary, with a high-tech feel underscored by the twin instrument and infotainment screens. There are plenty of USB ports as well.

An Appealing Package of Technology

The tech should appeal to the younger buyers Kia is targeting as well as the wireless versions of Apple CarPlay and Android Auto that come standard. Wireless smartphone charging is optional.

There’s a wide range of advanced driver-assistance systems: standard forward collision warning with auto-braking, rear cross-traffic collision avoidance, and lane-keeping assist. A handful of ADAS systems, including one that uses navi mapping to know when to slow in corners, are available.

As to the heart of these machines:

Niro EV is fitted with a high-power electrical architecture that helps reduce charging times. With its onboard 11kW charger, it will take 7 hours to replenish a fully drained battery. Plug into a public quick charger, and it will go from a 10% to 80% state of charge in 45 minutes.

The Niro PHEV, meanwhile, can’t use a quick charger, but a 240V system will fully replenish the battery in “under 3 hours,” according to Kia. And, of course, you can keep going even if the battery is drained, as with the conventional hybrid.

I spent much of my time in San Diego putting the 2023 Kia Niro EV through its paces. And comparisons to the more expensive and streamlined EV6 were unavoidable. The smaller battery-electric vehicle isn’t quite as quick, especially compared with the EV6 GT-Line. But it puts to good use the immediate torque of its single electric motor with a neck-snapping launch feel if you flip to sport mode.

Handling was reasonably good as I headed out toward the winding hill country east of San Diego. But I occasionally felt a bit of butt wiggle if I pushed too hard into a corner.

One of my favorite features is Niro EV’s 1-Pedal drive mode. It’s similar to what you’d experience downshifting a manual from sixth to third gear. Except here, you recoup more energy that’s then sent to the battery to extend range. On one particularly windy stretch from Jerome back to San Diego, I actually had to apply the brakes only twice, and I am a lead-foot driver.

The downside is that you can’t leave the Niro in 1-Pedal mode. As with the EV6, you have to toggle the left paddle every time you start up.

Like the EV, the Niro plug-in hybrid makes good use of its electric motor. It’s the second-quickest option for 2022. My one big complaint was the engine noise level when you’re driving hard.

Still, the 2023 Kia Niro PHEV is a great choice for someone with a relatively short commute or errand run. It also adds an interesting “battery-saver” mode. I

n some parts of the world, drivers face access fees or penalties driving in central cities using gas or diesel. That may follow in the U.S. The PHEV’s navi system can reserve the battery pack until you enter one of these zones and then switch to all-electric. You also can program the switch to occur, say, in a school or hospital zone, or near your home.

I jumped into the base hybrid model as my day started to wrap up, running it along the Pacific Coast Highway and I-405, as well as through some local neighborhoods. As I expected, it’s the least compelling of the three new Niro variants, with its anemic gas engine and undersized electric motor providing little thrust at launch, even in Sport mode.

That said, Kia expects it to generate at least half of total Niro sales going forward. That 53mpg EPA rating is a big draw considering today’s fuel prices.

When it debuted, the original Kia Niro was an intriguing addition to the Korean brand’s lineup, offering buyers all of the key electrified powertrain options. The 2023 takes things up a big notch. It’s bigger, roomier, and better equipped.

It also boasts notable improvements in all three of the drivetrain options, and that should draw plenty of attention as more and more Americans recognize the benefits of electrified drivetrain technologies. 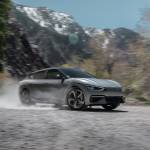 We spent a day in California wine country behind the wheel of the all-new 2022 Kia EV6, the first vehicle on the company's all-new global battery-electric platform. Read more…