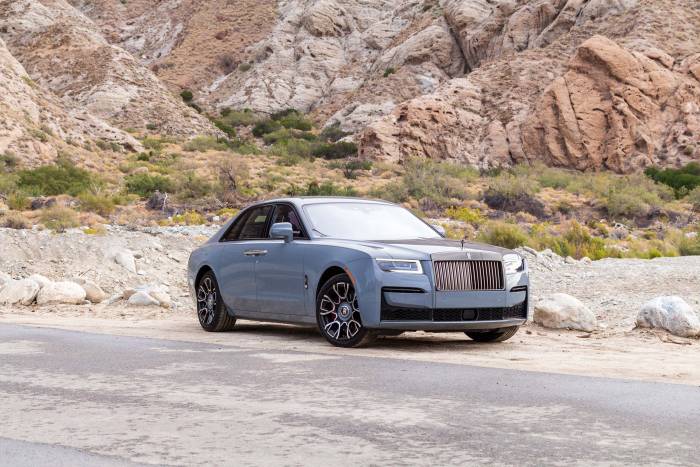 Is a car that costs more than a house really better than the average luxury sedan? We drive the 2023 Rolls-Royce Ghost to find out.

The Rolls-Royce Ghost Black Badge is what happens when the luxury automotive giant sets its sights firmly on younger buyers. These buyers want the best, but want it to be subtle. At least as subtle as a 12-cylinder 600-horsepower sedan the size of a Chevrolet Tahoe can be. And even then, that subtlety applies only on the outside.

Think of the average Roller owner and you’re probably thinking of someone like Thurston Howell III (if you’re older than 50), or maybe Bill Gates (if you’re younger). The actual Rolls-Royce buyer, though, is far younger. Younger than a BMW or Mini shopper, and even younger than Mazda or Volkswagen. The age we heard from Rolls-Royce PR people put Rolls buyers in their 20s and 30s.

Back in the day, it was your typical multigenerational, high-wealth client buying such a vehicle. Today a Rolls-Royce is the car of choice for musicians, athletes, and tech startup winners who are ready to show off. But only a little bit. That younger demographic actually explains a lot about how Rolls can do what it does inside of its vehicles.

To keep up with what ultra-lux buyers want, Rolls has what it calls the Luxury Intelligence Unit. No, that’s not a “Law & Order” series you missed. It’s the group that tries to keep up on changing trends within its buyer group. These days it’s saying the trends are bold in design, assertive in character, and dark in trim.

Black Badge means dark chrome trim replaces the brightwork of a standard Ghost. The dark-mirror gloss comes from a special electrolyte used in the chrome process. You won’t find mere paint or tinted clearcoat at work in a vehicle like this.

It also means carbon fiber wheels: not the wheel face, but the barrel, where 22 layers of carbon fiber sheet are folded over to make the 44-layer-thick wheels.

There are other highlights of the Black Badge spec, but because this is a Rolls, most of them aren’t mandatory. A key part of this car is the ability of the owner to make every piece unique. From choosing one of 44,000 paint colors to picking your umbrella handle color to getting whatever text you want on the illuminated sill plates. This makes us wonder how many Rolls dealers have had to try and talk a customer out of a cryptocurrency reference that was dated before the car hit the showroom.

The only other mandated accent is the Lemniscate. We would call the icon the infinity symbol, and it glows in the dash with 152 LED lights. A light guide has 90,000 laser-etched dots to make sure the illumination is dispersed evenly.

OK, there is one other Black Badge perk, and you’ll find it under the extremely long bonnet. Rolls-Royce has tweaked the 6.75L V12 engine to make 591 horsepower and 663 pound-feet of torque. The company used to simply say its power figures were “sufficient” — which makes this one more than sufficient.

Most Ghost Black Badge buyers pick the company’s not-so-basic black paint. One-hundred pounds of paint is atomized and applied to the bodywork to create what the company calls the darkest black in the industry.

The one we drove for this review is Burnout Grey. A $15,900 option, it’s set off by the $2,575 purple pinstripe that’s a recurring theme on the car both inside and out.

A buyer could spend hours or even days at their Rolls showroom picking through the different options for interior colors and options. There are dozens of different shades of hide, more choices of wood than your local forest, and then the really special stuff they don’t even really tell us about.

Rolls-Royce Ghost on the Road

But what is it actually like? Depending on what vehicle you’re coming from, it’s either the most amazing automotive experience in the world or surprisingly average.

Get behind the wheel and the Rolls-Royce Ghost is like nothing else. It has a sense of presence, even just walking up to it, that’s unmatchable. Thanks to its massive size, it looks larger than life. If you told me it was double the size of the BMW 7 Series I had driven earlier in the day, I would have no trouble believing you, even though they’re nearly the same.

The controls are a mix of delicate and perpetual. The gear lever, for example, is like a champagne flute in its delicateness. Grab it as you would in an F-150 and it would likely snap off, shocked that you would treat it in such a fashion. Immediately beside it, though, sits one of the several organ stop vent closure controls. Hewn from solid metal, these parts feel as though they could survive centuries at their given task.

Rolls is strange with its use of tech in the Ghost Black Badge. The company says its buyers don’t want fancy driver aids, so it has only the basics. It does have parking sensors — we expected a harbor pilot instead — and other key assists, but you won’t take your hands off the wheel anytime soon.

We thought that was because Rolls-Royce owners already had autonomous driving in the form of a chauffeur. But no, we’re told most of these cars are driven by their owners.

The 12.3-inch screen also looks out of place with its graphics and operation a generation old. It does enjoy a suitably British accent when it addresses you, of course.

Inside the fully digital dash is a gauge that tells you your power reserve: how much of your V12’s output you aren’t currently using. Keep the gauge above about 75 and you will hear nothing at all from the engine bay. The Rolls wafts forward at an increasing rate of speed.

Press harder and move the gauge past 75% and the V12 comes alive. We hadn’t expected this much sound or fury from the Ghost, but 591 horsepower is enough to move even this heavy sedan at a very brisk pace.

There is a bellow from the engine and exhaust telling you it is a fancy bellow and not some pedestrian V8. I expected it to be more silent, but part of Black Badge is a louder exhaust system.

The Ultimate in Suspension Comfort?

I expected the Ghost to waft over any potholes or bumps without ever notifying the driver; for example, to jump railroad tracks with little more than a slight clearing of its throat. So it’s with those high expectations in mind that I say the Rolls was not capable of those feats of silence. I’ll compare it again to the 7 Series, which was as quiet and as composed on the streets and highways around Palm Springs.

What the 7 doesn’t do that the Ghost does, however, is move people out of the left lane. That upright grille and the road presence of this car is unmistakable. It says, “I’m willing to take a sum that would buy a beach house and throw it down an interstate. I don’t care and you will get out of my way” like nothing else can.

Despite its size, the Ghost is not a massive car inside. It feels narrow, with rear seat passengers quite close to (in my case, sandwiched against) the door panels. The multi-adjustable rear seats were comfortable, but, again, not more than those in the 7. What it offers instead are tremendous appointments including folding tables, televisions (calling them TVs in here seems inadequate), footrests, and the Black Badge’s lovely carbon fiber and metal diamond weave trim.

The floor mats and carpets are everything you have imagined. Made from lambswool and inches deep, driving barefoot seems like an everyday decision to make.

So then, what are these masters of music, code, and sport getting for their money? Exclusivity, yes, since Rolls makes only around 5,000 vehicles per year, but there is more than that. There has to be to justify the $437,350 base price of this Black Badge ($492,250, with the options shown here).

Owners of this car are getting a level of personalization that isn’t available anywhere else in the auto industry. What other brand could give you Tailored Purple insets for the door pockets and matching contrast stitching? Or the ability to have three different exterior colors at the same time with your choice of hand-lined pinstripes in yet another shade? Or even the ability to have a starlight headliner with a sky matching your birthday, anniversary, or any other date that’s important to you? Maybe Bentley could, but they’re no Rolls-Royce.

Rolls will even give buyers the opportunity to visit its Goodwood, U.K., head office and explore an entire salon dedicated to making each car exactly to the buyer’s specification. 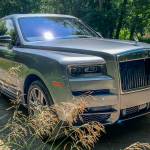