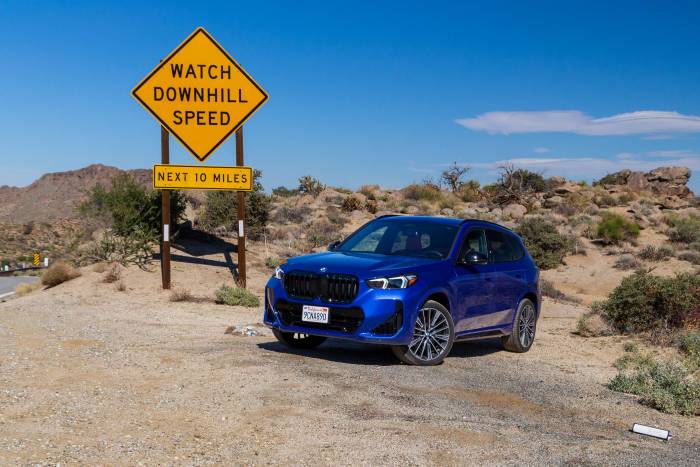 The X1 has been pretty blah for two generations. But BMW’s 2023 X1 is a transformed vehicle worthy of that propeller badge on the hood.

Entry-level models from luxury brands can often feel a bit, well, off. Look at the last-generation BMW X1 against the X5, or the Mercedes-Benz GLA against a GLS.

And there are plenty of other examples. They can end up looking pretty lackluster. The badge is there on the nose, but the interior tech and amenities trail behind, the styling is dull, and the flash just isn’t there.

The brands introduce cost-cutting measures so these vehicles can sell for less money. But that lower MSRP brings them right up against loaded-up models of more mainstream brands.

Mainstream or almost-luxury models that have more standard features, cost less to buy and might end up saving you some cash on maintenance down the road. Sure, you get to drink the fancier coffee at the BMW dealer, but a Mazda CX-5 Signature or Volvo XC40 are both impressively well-made vehicles.

For 2023, BMW has brought an all-new version of its smallest model to market. This time around, the X1 is looking to show you what the difference is between a loaded-up mainstream model and what the Bavarians can bring to the market.

BMW brought us to sunny Palm Springs, Calif., home to choppy highways and unbeatable mountain roads to put the new X1 to the test.

To save you looking it up, yes, this really is the smallest Bimmer sold in the U.S. Even after growing 1.7 inches in length (177.2 overall), just under an inch in width, and 1.7 inches in height it takes up less length in a parking space than a 2 Series Gran Coupe.

Of course, the 2023 BMW X1 does a lot more with that footprint than the 2 Series thanks to its upright crossover body. BMW says that the larger 2023 X1 gets more elbow room for occupants.

Despite the length and the extra 0.9 inches of wheelbase, the total interior volume is exactly the same. The same, in this case, is just fine, because the X1 has enough space for four adults — even XXL ones like me — with no issues.

BMW’s 40-20-40 split fold for the rear seat can help you make the most of the space, too. Create a center pass-through for long items without them sliding around side-to-side or make room for more gear and still bring along three passengers. It’s up to you.

Interior size, though, isn’t what matters in this class. If it was, you’d take home a base-model Chevy Traverse and save a few grand. In this class, it’s what you get in that interior that matters. There, BMW has really stepped it up.

Our drive of the 2023 BMW X1 was part of a big BMW event and the launch of the new 7 Series and refreshed X7. We were seeing the X1’s new cabin against the whizbang six-figure luxury of those models. Some very tough context.

Seeing the new X1 at the same time as those big-buck models might have actually made it more impressive, because much of what you get in the X1 is a smaller version of what the 7 has — like the new 10.25-inch digital dash display and 10.7-inch center screen. It has a smaller center screen than the 7, but still in a classy curved glass bezel.

Just like the 7, you can get augmented reality navigation. It’s on the center screen here, not the dash, but the important bits are the same. You get a live view from a front camera with a digital projection of where you need to turn. In a new place or a complicated intersection, this is super handy — something you won’t find on a tarted-up Kia Sportage.

It’s a delightfully quick and capable infotainment system that brings new levels of voice commands to the BMW. Nearly everything can be controlled by just asking the car to do it, from easy stuff like changing radio stations to taking you directly to deep-dive driver assist options screens.

The latter capability is important because BMW has dropped nearly all buttons to go along with the change. Yes, this might be a dealbreaker for some buyers. You should probably give it a chance. There is still a real volume dial, and there is a button to let you turn on the parking cameras. That might be all you need.

What might be even more controversial is BMW’s move to drop the P. That’s right, the X1 doesn’t have a “Park” switch on the gear selector. And it’s not the only BMW to get that change. Instead of the driver picking Park, the X1 selects it for you.

Turn off the engine or open the door, and the X1 picks Park. We’ll be making sure to set the parking brake because this is a big leap in trust.

The new gear selector is attached (digitally) to an equally new seven-speed dual-clutch transmission. We’re a bit surprised that BMW has dropped the old eight-speed auto for a DCT unit, but it is a very good one.

You’ll get very quick shifts when you’ve got the sport mode dialed in, for a start. It suffers from a small amount of the DCT shrug (a slight hesitation when moving away from a stop), but it isn’t intrusive.

The result is 241 horsepower and 295 pound-feet of torque, both figures well up on 2022. More power and a chassis that hasn’t picked up any pounds lead to quicker acceleration and a sporty driving feel.

This is tough to match in this class, especially if you hold the left-hand shift paddle long enough to trigger Sport Boost. Every setting here is immediately set as sharp as it can be.

More power and fewer gears usually mean you use more fuel, but not this time. BMW’s powertrain tweaks improve fuel economy a useful amount — 3 mpg on the highway and 2 mpg in the city for an official estimate of 34/25 mpg.

BMW focuses on being fun to drive, even with its crossovers. The new front suspension is tuned for more rigidity and sharper turn-in response, while the rear is also focused on cornering. The X1 handles wonderfully, earning its place in the world of BMW drivers’ vehicles — a claim previous versions couldn’t make.

Adaptive suspension is being offered on X1 for the first time. The Adaptive M dampers come with a more direct steering rack ratio and a 0.6-inch lower ride height. The adaptive dampers make the already compliant ride a little bit softer on the highway. They also sharpen it significantly in sport mode.

What the adaptive dampers — and the regular ones — don’t really do is dirt. The X1 has 8.1 inches of ground clearance, enough for most dirt or gravel roads and most driveways, but it’s stiff.

We didn’t venture far off of the pavement on our test loop, but the X1 felt very firm when driving over rough terrain. It’ll get you there, but you should go slowly. Especially if you’ve picked the 20- or 21-inch optional wheels.

The 2023 BMW X1 feels better than its predecessor in every way. It looks better too, thanks to what feels like much more time spent in the styling department. The grilles are big but not too big. The headlights have more depth, and the body’s lines feel properly luxe and not bland econobox.

We loved BMW’s new tech features like the Back-Up Assistant that can replicate your route in reverse. Also, the Drive Recorder dashcam with Crash Recorder feature that can capture all of your camera views in the 60 seconds around a crash is handy, too.

For features you’re more likely to use every day, the X1’s infotainment can fire up as you approach and do things like connect your phone before you even get in. That lets you drop your device in the massive wireless charge pad, start the engine, and go more quickly.

Looks like the smallest BMW is suddenly a big deal. With more power, more tech, and more luxury, it’s more fun to drive. If your drives to the trailhead are mostly asphalt with a little bit of gravel at the end, then the 2023 BMW X1 is a wonderful way to get you there.

With a starting price of $38,600 and standard AWD, this entry-level luxury model isn’t asking why you’d make the jump to a more prestigious brand. Instead, the X1 is showing you why you wouldn’t. 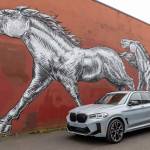 Lots of ponies under the hood, great handling, and a sporty, luxurious interior make the BMW X3 M Competition a compelling SUV for a wide range of buyers. Read more…