Blurring the lines between dirtbike and e-bike, the CAKE Kalk OR combines big torque with scant weight for one insanely fun ride.

I’ll be frank about this: I don’t know what to call the CAKE Kalk OR. But I want one for Christmas.

In early October, the Swedish electric bike brand CAKE invited me to Moab to sample its off-road electric bike. I originally saw the Kalk OR at the Outdoor Retailer show last year. Being a diehard dirtbiker, I immediately wrote it off as a glorified e-bike.

The aesthetics reminded me of Apple products, the tires were too narrow, the components looked dainty, and CAKE claimed it was nearly silent. “Not for me,” I thought. I’m all about electric dirtbikes, but to me, the Kalk OR was a far cry from a dirtbike. 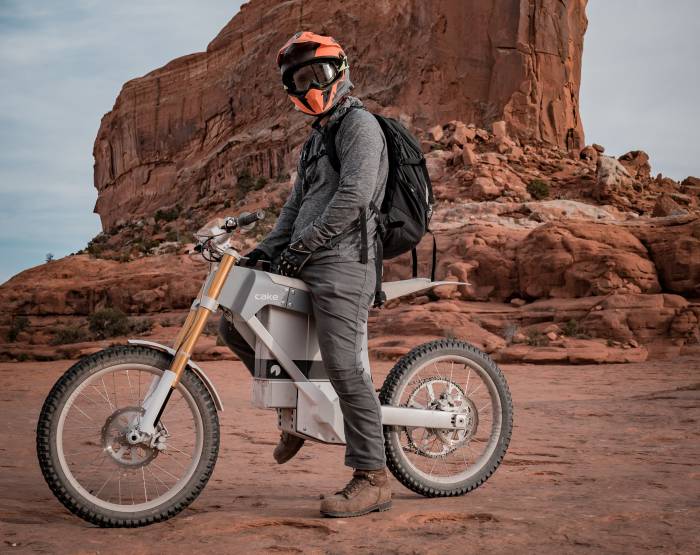 Soon after landing in Moab, I threw my leg over the Kalk OR, with only a helmet; I wasn’t expecting much performance, so I felt other safety gear wasn’t required. A few yards later, I wanted my boots, knee braces, goggles, and the rest of my dirtbiking gear. The Kalk OR ripped.

My preconceived ideas of the Kalk OR drifted away across the Utah desert as my jaw started to hurt from smiling so hard.

The most immediate and poignant characteristic of the Kalk OR was the weight; more accurately, the lack of it. At a claimed 152 pounds, the Kalk OR was roughly 65 to 130 pounds lighter than the gas-powered dirtbikes in my current collection.

It’s hard to overstate the effect of this tremendous weight advantage; the chassis reacted dramatically quicker to much lighter inputs. This created confidence. The momentum of the bike, regardless of speed, was worlds easier to change compared to a heavier bike. The effectiveness of these lighter inputs also meant being able to ride for longer durations before fatiguing.

The narrow tires and less substantial components that originally had me skeptical of both durability and the potential performance of the Kalk OR made sense after riding the bike. The lack of mass compared to dirtbikes meant smaller impact forces and less momentum to change, allowing all the smaller and lighter components to do the same job as portlier versions on gas dirtbikes.

Another apparent characteristic of the Kalk OR was the power delivery of the electric motor. The torque delivery to the rear wheel was instantaneous with even small throttle openings. Throttle control when traction was high or low required close attention to avoid unloading the front tire or breaking the rear end loose. This was even more important because CAKE bikes lack a clutch.

The CAKE power delivery wasn’t at all like any e-bike I’ve ridden. It ramped up more quickly compared to even the most powerful e-bike I’ve tried. The 11kW motor delivered a claimed 280 Nm of peak torque to the rear wheel. For comparison, the Shimano STEPS e-bike motor, used in 25 brands, has a claimed output of 250 W (regulations limit e-bike motors to 750 W) and 70 Nm of peak torque usable for pedal assist.

The CAKE OR had a claimed top speed (with stock gearing) of over 50 mph, while pedal-assist e-bikes are limited to 28 mph. 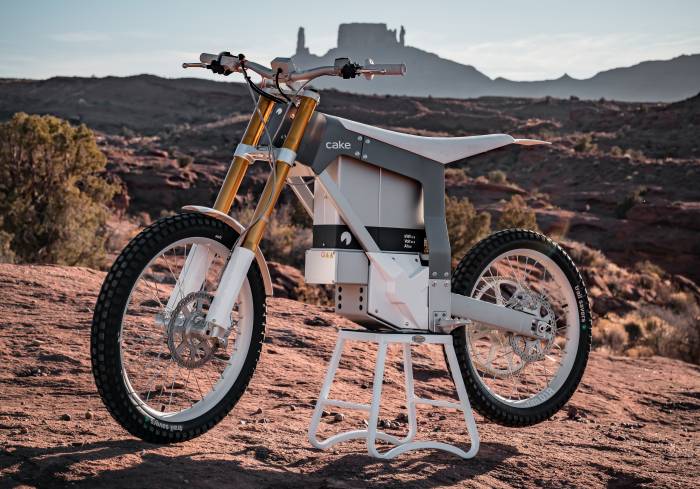 My seat-of-the-pants dyno said that the power-to-weight ratio of the Kalk OR produced just as much fun as my 450cc trail bike. The top speed wasn’t there, but on the majority of terrain I considered fun, I didn’t miss going faster. I could not say that about any e-bike I had ridden to date.

The Kalk OR had three riding modes based on the aggressiveness of power delivery. I rode in the middle mode except in deep sand, where the “race” mode worked well. These riding modes and individual throttle control affected the range.

The 2.5kWh swappable battery kept us out for a few hours on both days, including substantial riding in sand on the second day. CAKE claims typical range is 3 hours or 62 miles; this limited range was the biggest nick in the fun factor for me compared to gas-powered dirtbikes. I would have to stop riding for a reason other than being physically shelled.

By the second ride aboard the Kalk OR, I felt the ergonomics for trail riding were spot-on. The narrowness of the pegs and their relation to the bars and steering stem worked well for both the tight-radius, slower turns on the Slickrock Trail and the wide-open sand washes in the surrounding desert.

The one item that felt lacking was the seat: hard and wholly uncomfortable for me. It seemed to be built for looks but not actual use. But luckily it wasn’t much of a factor because I ride off road almost exclusively in the standing position.

I also believed that the high-end Ohlins suspension could have used some tweaking outside of clicker adjustments. I felt the compression dampening in the air/oil forks ramped up too steeply (I feel the same about almost all dirtbike air-sprung suspension) and that the rebound of the shock was a tad quick. But these are relative nit-picks from a guy that tests dirtbikes.

Then there’s the lack of sound. All I could hear was the hum of the chain and the wind flowing through my helmet. I originally thought I would miss the sound of a gas motor and the feeling that sound conveys when you whack the throttle and let the clutch out. But I didn’t. The relative silence added greatly to my experience of riding in Moab.

I want one. I have dirtbikes and have ridden e-bikes and enjoy all of them. But CAKE created a class of its own with the Kalk OR. It’s insanely fun and a wholly different experience to me than a dirtbike or an e-bike. 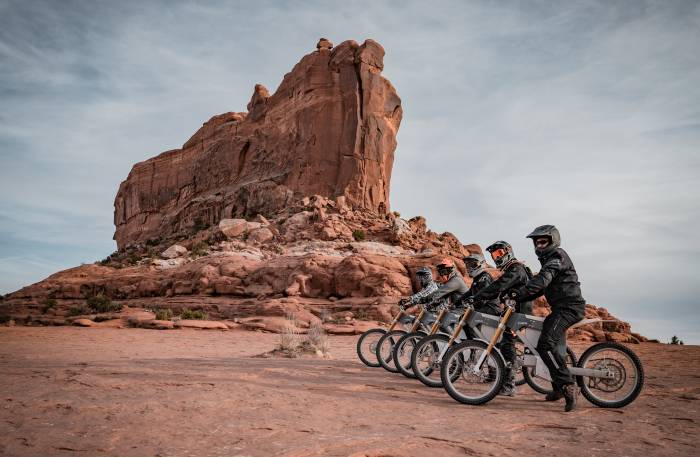 But the barrier to entry is high, as MSRP with one battery is $13,000. That’s higher pricing than the majority of dirtbikes and e-bikes.

So who is the Kalk OR for? It’s for me — if I had more disposable income. I’m already a dirtbiker and a mountain biker but never felt like an e-bike scratched an itch. The experience is different enough from a dirtbike or an e-bike to warrant consideration, and it’s incredibly fun. But you have to have the money to spend.

Of course, I’m still hopeful and asking Santa to slide a Kalk OR down my chimney. I promise to be a good boy.

Up Next: Lael Wilcox: How to Prepare for a Bikepacking Race

Saving…
Lael Wilcox: How to Prepare for a Bikepacking Race
Rivian Tank Turn Is Real! Electric Truck Spins Like a Top
×