Like most hybrids, the E-Ray will deliver better fuel economy than the current Stingray model, but Chevy is also billing it as the fastest Corvette ever. And, as the first version of the two-seater with all-wheel-drive, E-Ray will become the first “all-season” version of the sports car.

General Motors is on what CEO Mary Barra calls “a path to an all-electric future,” and that includes the Corvette. A battery-electric version is in the pipeline, GM officials confirmed in 2022, and is scheduled to reach the market sometime around 2025. The 2024 Chevrolet Corvette E-Ray marks the first step on that journey.

The E-Ray “represents what this vehicle is capable of going forward,” said Scott Bell, the global vice president of the bowtie brand, during a media background briefing ahead of Tuesday’s official E-Ray introduction.

There’s been plenty of speculation about the hybrid in recent months, with fans, analysts, and the ever-inquisitive automotive media wondering just how complex a system Chevy might come up with. Some expected the automaker to follow the lead of Acura, its NSX supercar pairing three electric motors with a turbocharged V-6. Others anticipated a plug-in system that would allow the hybrid ‘Vette to travel extended distances in all-electric mode.

As it turns out, Chevrolet engineers opted for a minimalist approach. E-Ray pairs a single electric motor with the 6.2L small block V-8 today used in the “base” Corvette Stingray. Drawing power from a 1.9kWh lithium-ion battery, it drives the front axle, creating what is sometimes described as a “through-the-road” AWD system.

The layout “provides an all-weather confidence we’ve never had” before, said Bell, adding that this transforms the E-Ray into an “all-season” vehicle that should appeal to potential buyers who’d like to have something they can drive all year, rather than putting it in storage during the winter months.

Whatever the season, the hybrid model will take advantage of the instant-on nature of electric motors. E-Ray will punch out an extra 160 horsepower on top of the V-8’s already impressive 495 ponies — for 655 total. And it will make another 125 pound-feet of torque, atop the Stingray’s 470 pound-feet — for 595 total.

We’ll have to wait to get a sense of what it feels like to launch the E-Ray, though it should be more like a carrier launch, the electric motor delivering an instant boost, even as the small block V-8 is revving up.

According to Chevy, the hybrid will hit 60 in a mere 2.5 seconds, about 0.4 seconds faster than the Stingray, and a tenth quicker than the recently added Corvette Z06 — even though Corvette Marketing Manager Harlan Charles hints E-Ray will be “very efficient” when final EPA mileage numbers are released later this year.

For those who might want to test the E-Ray out on a drag strip, Chevy test drivers have been blasting through the quarter-mile trips in 10.5 seconds and 130 mph.

Intriguingly, there’ll be another potential advantage to the hybrid system. The development team held the added weight of the batteries, motor, and control electronics to a relatively modest 200 pounds, said Brad Franz, the program’s lead engineer.

“Every kilogram and every gram had to earn its way into this vehicle,” Franz said. But by mounting the pack in the tunnel beneath the cabin, E-Ray has a slightly lower center of gravity than the stock Stingray.

Other useful features will include an electronically controlled limited-slip differential, as well as a magnetic ride control suspension. The latter system relies on a sophisticated technology replacing the traditional oil in E-Ray’s dampers with a magnetorheological fluid. By applying a magnetic force, each shock can individually vary anywhere from fully stiff to soft in the distance it takes to travel about an inch at 60 mph.

To keep the E-Ray in check, all versions of the hybrid will feature carbon-ceramic Brembo brakes.

The Corvette E-Ray picks up a number of styling cues from the beefed-up Z06 model. It’s 3.6 inches wider than the Stingray, for one thing. The hybrid adds unique fascia, front and rear, and distinctive badging. There are a variety of dedicated colors and striping options.

Motorists will be able to adjust the behavior of the magnetic ride control, steering, brakes, transmission shifts, and the motor, among other systems, by picking any of the various driver control modes. These include Tour, Sport, Track, Weather, My Mode, and Z-Mode, as well as a Charge+ mode that directs more power back to the battery to keep it fully charged.

Then there’s Stealth Mode which shuts off the V-8 and lets you drive in virtual silence, powered only by the electric motor. The pack holds enough energy to travel about 3 to 4 miles that way, said Chevy. Once you hit 45 mph, the gas engine will fire up, however.

The E-Ray 1LZ coupe will start at $104,295 plus delivery fees, Chevy said. That’s about $1,000 less than the Z06 before adding in destination charges. Expect the convertible to follow to add about $7,000 to the price tag.

The 2024 Chevrolet Corvette E-Ray will arrive in U.S. showrooms in late 2023, at least if parent GM can resolve ongoing problems with the shortage of key components, such as semiconductors. The hybrid will roll down the same assembly line as other versions of the ‘Vette.

Now that the first-ever electrified Corvette has been revealed, expected speculation to shift to what future variants will follow. That could include the rumored Zora model named after Corvette’s legendary chief engineer Zora Arkus-Duntov. The all-electric model will follow around 2025. 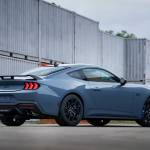 The pony car is reborn into the digital age. The 2024 Ford Mustang redefines what a muscle car is all about. Read more…