The Ducati DesertX spent over 2 years in the concept phase. The just-released production bike hews surprisingly close to the proposed design.

As delivered, the DesertX closely echoes the 2019 concept. Between the two, Ducati most notably swapped out the engine.

Instead of the original Scrambler 1100, it opted for a smaller 937cc liquid-cooled Testastretta 11° Desmodromic valvetrain powerplant. It throws down 110 horsepower at 9,250 rpm, at a maximum torque of 68 pound-feet at 6,500 rpm.

Optimizations include a lighter, more compact 8-disc clutch and a bearing-mounted gear drum to reduce friction during shifting. 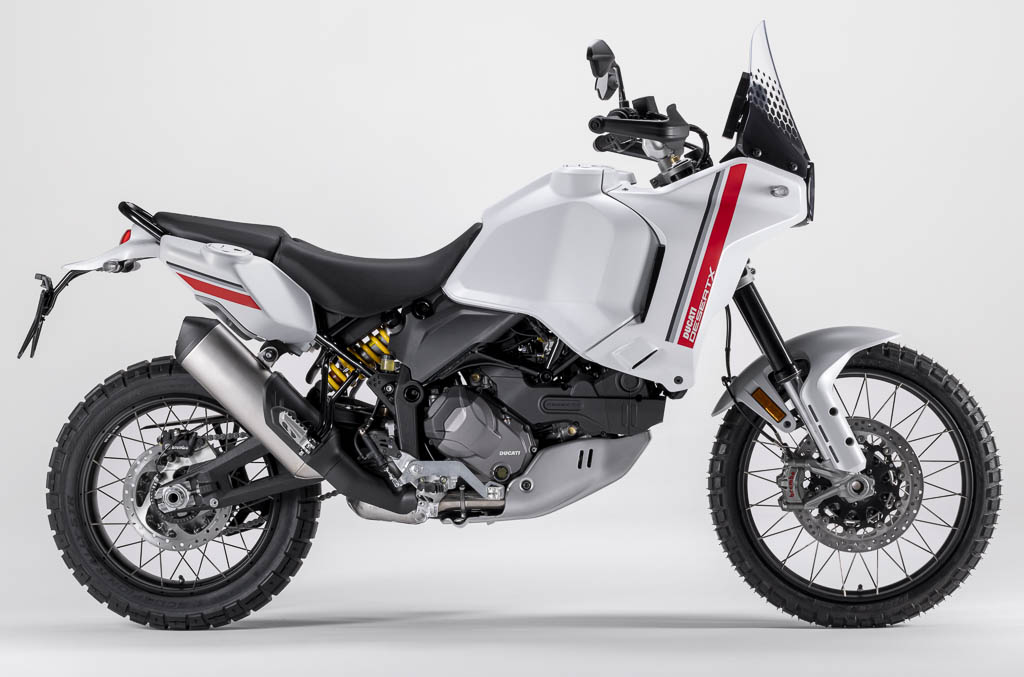 Chassis, Suspension, and Braking on the Ducati DesertX

The DesertX chassis’ steel trellis frame supports 9.1 inches of suspension travel in the front and 8.7 inches in the back. The bike sits on a 21”/18” tubeless spoked wheelset with Pirelli Scorpion Rally STR tires.

A 46mm fork with a not-too-long 27.6-degree rake, plus a long 63.3-inch wheelbase, should help give a grounded feel during aggressive dirt riding. For nappy trails, ground clearance is ample at 9.8 inches.

Ducati handles the brakes with parts from Bosch and Brembo. Like all Ducati motorcycles, the DesertX features Cornering ABS, which uses an array of sensors, actuators, and pressure regulators to prevent lockups — even at full lean with the throttle wide open (the brand claims). 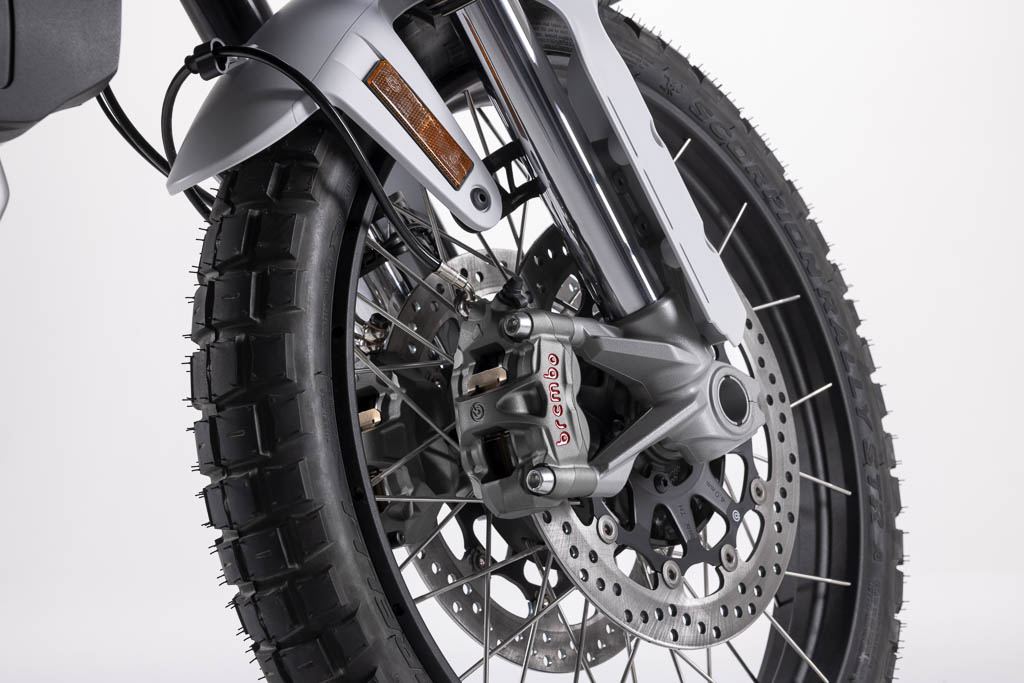 Electronic rider aids include six riding modes, which utilize four power modes to adapt the Testastretta engine to the conditions at hand. Modes range from Enduro (which reigns in the bike’s power delivery for easy off-road riding or for inexperienced drivers) to Rally (more power, quicker, and reduces electronic safety controls).

Self-explanatory wet, urban, and touring modes are also on deck. The rider controls it all on the tight, vertically oriented display. 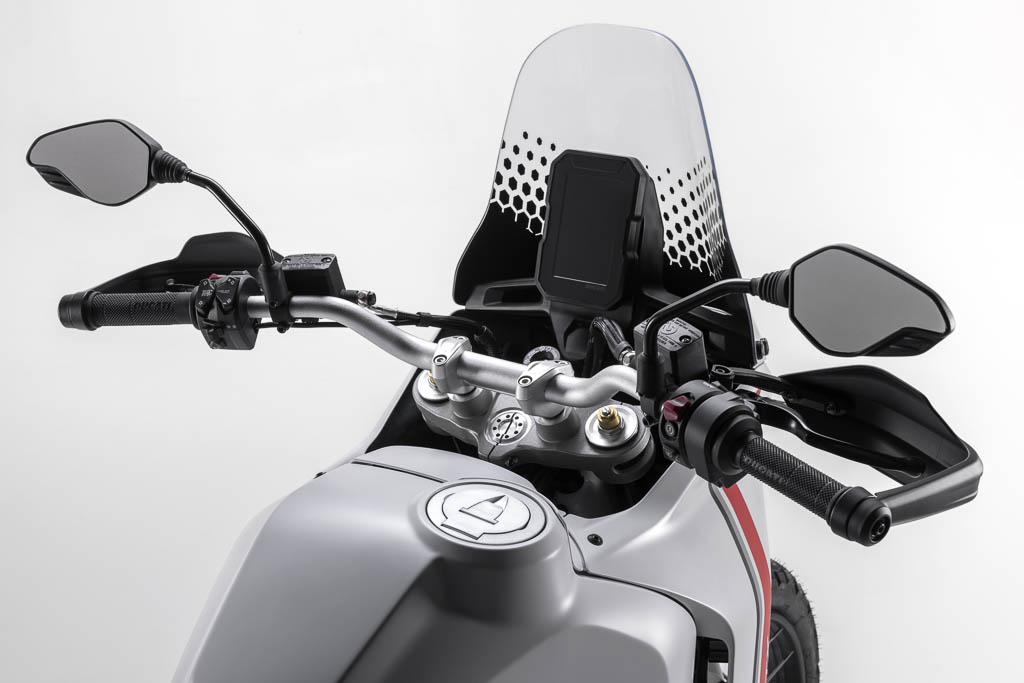 The DesertX takes advantage of Ducati’s various proprietary electronic control technologies, which limit outcomes like wheelies and losses of traction at the rear wheel.

Range, Weight, and How to Find a Ducati DesertX

For longer forays into the unknown, customers can add an accessory 2.1-gallon rear tank to the DesertX’s 5.54-gallon tank. An estimated 42 mpg gives the bike a max range (auxiliary tank included) of around 300 miles.

The DesertX comes in at a wet weight of 492 pounds. The seat height is 34.4 inches. A narrow inner leg curve and soft initial suspension help make reaching the ground easier. 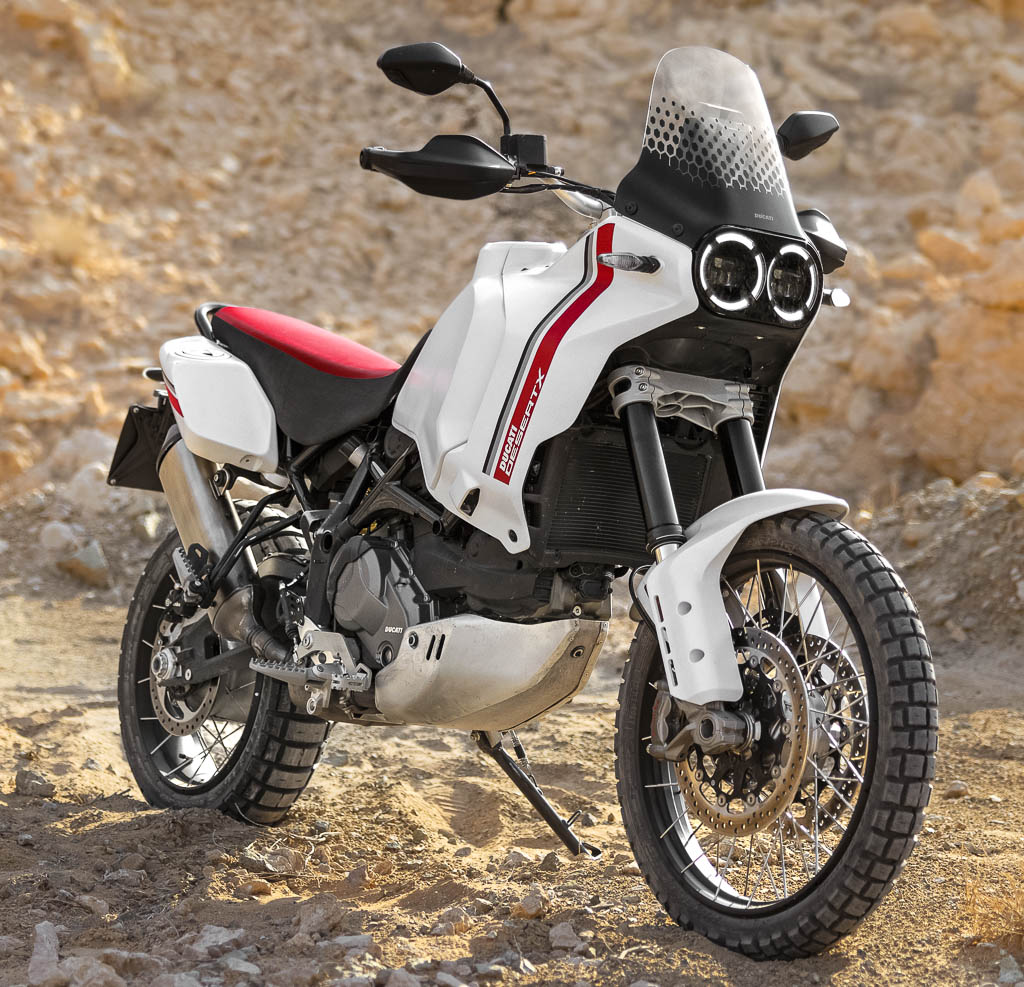 The Ducati DesertX hits North American dealerships in June 2022, in its distinctive white pinstriped livery. The bike’s lone variant starts at $16,795 MSRP. To locate one near you, cruise to Ducati’s dealer contact portal.

Blurring the lines between dirtbike and e-bike, the CAKE Kalk OR combines big torque with scant weight for one insanely fun ride. Read more…

Up Next: CyberLandr: Concept Camper for Tesla Truck Racks Up Over $100 Million in Reservations