Home » Motors » First ‘Hyper-SUV’? What You Need to Know About the GFG Style Kangaroo

Carbon fiber, all-electric, four-wheel steering, AWD, fast, and luxurious — it’s no wonder GFG Style touts its Kangaroo concept as a ‘hyper-SUV.’ Still, we’re dubious about the whole ‘SUV’ claim. And even the ‘hyper’ part, for that matter.

The GFG Style Kangaroo concept is a cool vehicle that we’d love to borrow the keys to. While it’s just a concept, it’s already been out in the real world for testing, so it’s not just a show queen. 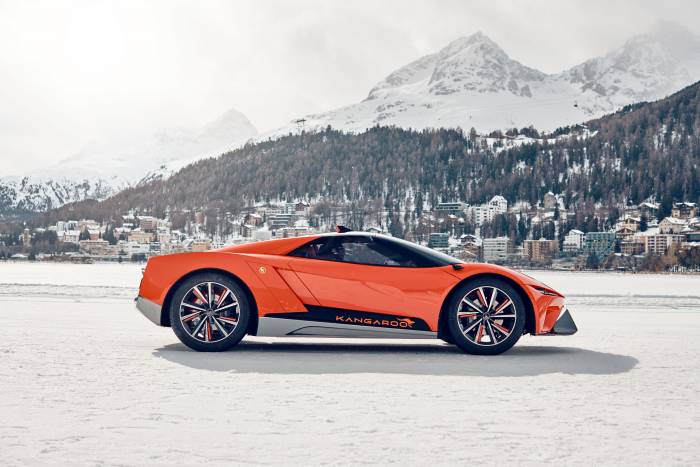 The GFG Style Kangaroo concept car gets its name from the dynamic hydraulic system that allows it to have three ride heights.

“Just like a kangaroo, it rises up, springs into action, jumps from one terrain to another and is fast, very fast indeed,” said Fabrizio Giugiaro, the vehicle’s designer, in a press release.

Is the Kangaroo an SUV?

A sport utility vehicle, or SUV, usually has upright seating and a commanding view of the road. It’s roof-rack-compatible and offers plenty of cargo and passenger space. An SUV also usually offers four-wheel drive and good ground clearance.

The Kangaroo has only two snug, sports-car-style seats and very little cargo room. The super-cool, distinctive two-piece doors — with upper gull-wing-style polycarbonate windows and scissor-style lower door openings — will not allow any roof rack attachment. This vehicle isn’t going to be very well-suited to carry much gear or more than two people. 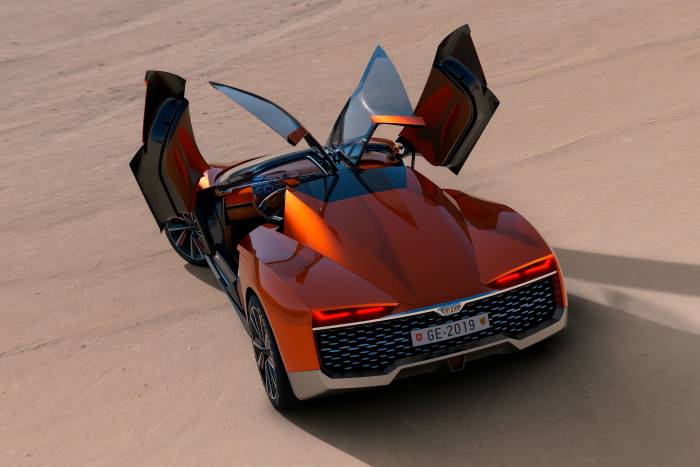 The unique retractable front splitter gives the car a relatively impressive entry angle for tacking off-road obstacles. The exit angle is also relatively good, but the long wheelbase creates an extremely poor breakover angle. On the trail, this means you might find yourself stuck in the belly of this beast if you encounter any steep hills or big rocks.

Is the Kangaroo a Hyper-Anything?

The Kangaroo is hyper-cool, but not so much an SUV or even a hyper-car. It offers up nearly 500 hp and just over 500 pound-feet of torque. Those are big numbers but barely put the car in super-car territory by modern standards. 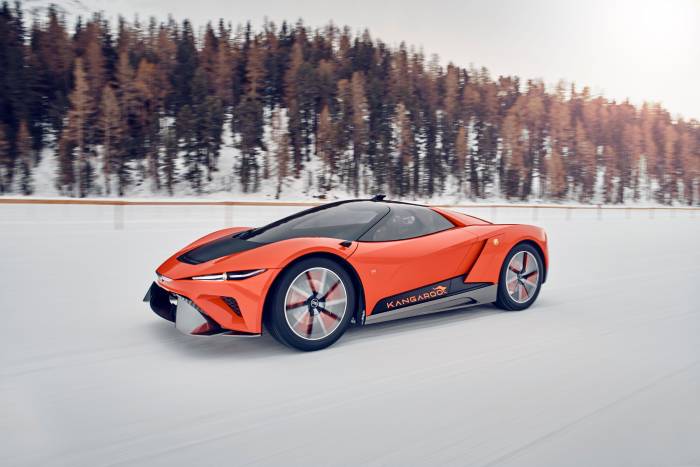 While the Kangaroo’s 155mph top speed and 3.8-second 0-60 time sound quite invigorating, those also aren’t numbers befitting a hyper-car.

The crazy-complex and cool doors, four-wheel steering, massive 22-inch custom wheels, futuristic interior, and carbon body all try to elevate this vehicle to hyper-car status. However, the performance numbers and general concept behind the Kangaroo let it down.

GFG Style is a Turin, Italy-based vehicle design and development consultancy. Two luminaries in the car design world, Giorgetto and Fabrizio Giugiaro, started it in 2015. GFG Style says its founders “have been directly responsible for creating over 300 standard production models and more than 200 research prototypes for numerous manufacturers.”

While we’re pretty sure the GFG Style Kangaroo isn’t a “hyper-SUV,” we do know that we’d love to get behind the wheel and take it off road. It would be sure to be a blast in sand dunes, on snow-covered mountain roads — just about anywhere, for that matter. We’d probably carry along some Maxtrax traction boards, though, as we’d probably get stuck on any off-pavement adventures.

Up Next: Subaru Viziv Adrenaline: A ‘BOLDER’ Subaru, or Just More Marketing Fluff?