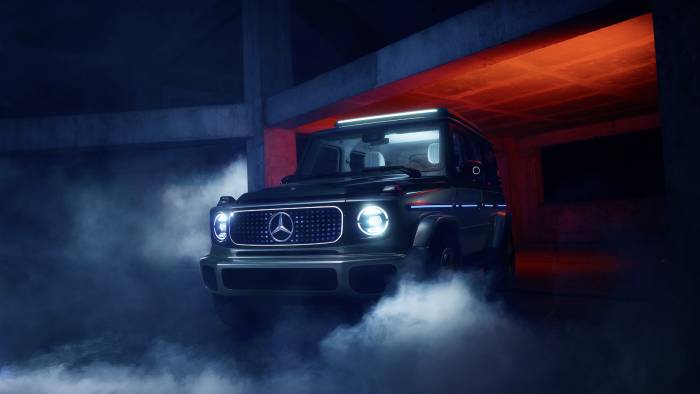 Mercedes-Benz invented the radiator and then the grille to cover it. Since then, the radiator grille has become one of the most iconic car features. From cooling to the cool factor, here’s a look at the Mercedes-Benz grille evolution.

What goes into a car’s grille? A lot, says Mercedes-Benz, starting with its first honeycomb radiator that revolutionized the automobile, and moving all the way to the modern Benz EQs where there’s not actually a grille at all.

From Function to Form

Yes, the first Mercedes-Benz grille design was actually meant to make the car work instead of to make it look good. The year 1900 was still very early in the origins of the automobile, and keeping engines from overheating was a challenge. Wilhelm Maybach invented the radiator for water cooling an engine in 1897, but it was more like a home heating radiator. Big, ugly, and not all that effective.

In 1900, he invented the honeycomb radiator. Eight thousand small pipes, just a quarter-inch across, were arranged into the new radiator shape. Massively more cooling power with a fan for low-speed driving made the Mercedes 35 PS and its 35-horsepower engine a huge success.

It took a long time for the radiator to become more than just a crucial mechanical part. At least, that’s what Mercedes claims for its grille evolution.

In 1931, the company launched the Mercedes-Benz 170. The radiator got a grille, and it was off and running. The grille was mounted to protect the rad, but it was a cosmetic upgrade, as well.

The rounded rectangle was set off with a wide chrome frame. Keeping rocks out of the rad wasn’t the only goal. Mercedes knew a dirty radiator was less effective, so the fine mesh was meant to keep out dirt.

The Mercedes-Benz star showed up not once but twice on the new nose — a badge at the top as well as the traditional hood ornament. The whole thing was integrated into the long hood, and it was meant to send a clear message of quality and elegance.

Mercedes loved the chrome grille so much that it kept the same basic design all the way through the 1960s. There were some small changes, as Mercedes added new angles to the top and bottom of the part and changed the number of horizontal bars. The company went wider and shorter, too, to suit the changing style of its vehicles.

Merc loved the grille into the ’60s, except for one car — the 300 SL Gullwing needed something different. The race car needed more airflow, so it got what the company called the “sports car face.” One significant Mercedes-Benz star — this one’s going to come back a lot — a single horizontal bar, and a chrome surround. No more mesh in this one — Sir Stirling Moss needed to keep the engine cool in the Mille Miglia.

That grille was used on many Mercedes-Benz sports cars and roadsters over the decades. That is, until 2007 when Benz decided to give up on all of that history and added the simple sports car face to the entry-level C-Class sedan as an option. We’ll come back to that.

In the 1970s, the standard Merc grille was short and wide because its sedans of the time were short and wide. It fit well in the nose. The star hood ornament would come and go, and so would the mesh.

Mercedes started by loosening up the gaps in the mesh and then turning it into a grid of bars. By 1998, it was only a few vertical bars and one horizontal split down the middle.

Mercedes-Benz says the changes make the grille “more dynamic.” We’re not sure what makes them dynamic, but the cars would look dated with the older style.

Once Mercedes opened the door to the sports car nose on the C-Class sedan, things started to get out of hand. The G-Class got its own grille design in 2008, and Maybach returned in 2010 saying “auf wiedersehen” to the horizontal bars completely.

In 2012, a grille full of diamonds showed up. Not real diamonds, more like shiny studs in the empty space of the grille. If you’re wondering how the radiator is being protected at this point, it’s not.

In 2016, AMG needed something to better identify its own models, and that launched the Panamericana grille, named for the style of grille Mercedes used on a 300 SL to win the Carrera Panamericana way back in 1952. The slats made it a lot easier to tell what was an AMG and what was a four-cylinder with the wrong badges on the trunk.

Sometimes these new grilles looked just right. Others are hiding the many sensors to run modern safety features and have a star that looks like a sticker. As Mercedes-Benz moves into the next era, we hope you like the latter.

With electrification, Mercedes-Benz doesn’t need a grille. There are a few small air intakes for ventilation and battery cooling, but allowing those to take up the whole nose is bad for aerodynamic performance and range.

So, Mercedes-Benz went all-in on the sticker. It’s actually called the Black Panel, and mostly serves to give the car a face — and to hide even more sensors.

To make sure the cars don’t forget their past, Mercedes makes the grille out of light instead of chrome. Accent lighting running around the panel provides the effect of a vintage chrome surround, with a few details inside the panel showing you the difference between AMG and standard.

The Black Panel grille should stick around for a few years. For how long? Expect the changes to be more like the long-lived early days than the flurry of activity of the late 2000s, but with plenty of small variations. 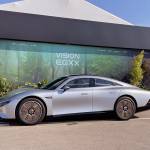 Mercedes Could End Range Anxiety Once and for All: We Drive the Vision EQXX Prototype

We traveled to Germany to get a first-hand experience behind the wheel of the Mercedes Vision EQXX prototype. Range anxiety be gone! Read more…