Mojipic is a new voice-controlled digital emoji display. You can now display your emotions on your car window, or anywhere for that matter.

No longer is a simple hand gesture or shouting the best way to express your emotions to fellow drivers. Now you just tell Siri or OK Google what you’re feeling, and an appropriate emoji displays on your car window.

In our digital world, people are increasingly communicating through emojis. I, for one, have fallen prey to this epidemic myself. A few years back, I thought texts were a waste of time. Now my life is full of texts littered with emojis. I guess it’s time to broadcast our addiction to everyone around us! 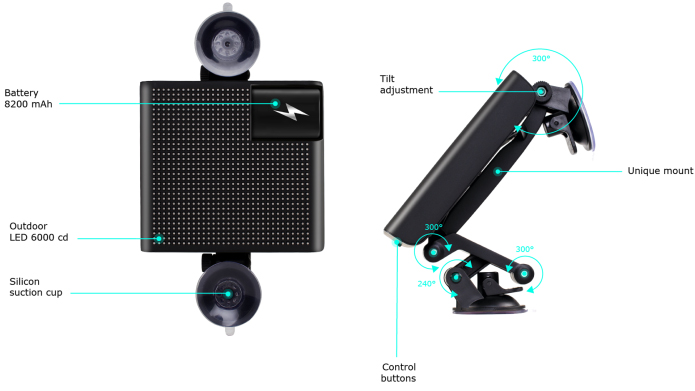 The Mojipic allows you to broadcast emojis to anyone within eyesight of the device. You can mount this device in your car window, in your office cubicle, or even at home. Pick up a few, and you can let everyone who comes in contact with you offline know how you’re feeling.

And it goes beyond emojis into the realm of bumper stickers. Baby on board? An animated display will tell the world. We didn’t see an option yet, but because you can supposedly customize emojis, we expect a full battery of stick figure families soon.

And while we haven’t seen this in person, the concept seems sound. Mojipic is a bright, Bluetooth-enabled, 5.5 x 6 x 1-inch, 32 x 32-pixel LED display. You can hang it just about anywhere or mount it to any surface a suction cup can stick to. It runs off an internal, rechargeable battery or any 12V source with an included 16.4-foot cord.

The real genius of this device is the app that operates it. Users can control the app with voice commands through Apple and Google personal assistant integration. Sure, this device can add to distracted driving, but voice control should somewhat mitigate this. “Siri, tell that driver to get off my ass!”

The Mojipic app has more than 1,500 GIFs, emojis, flags, sports team logos, and the like. You can also create your own drawings and GIFs within the app. It can even create unique QR codes.

Will Mojipic Actually Hit the Market?

The Mojipic campaign has already reached its funding goal. According to the Indiegogo campaign, it’s already raised over $200,000 from 2,700 backers. The campaign still has over a month left.

There is a “Flexible Goal” on this campaign, which means that no matter how much money backers give, funding will go to the Mojipic. Because the product is already developed and production molds are already in progress, there’s a good chance this product will actually ship to consumers.

The Mojipic starts at $69 (MSRP $99), and buyers should receive deliveries in August. Let the emoji plague descend on us all!

Up Next: Outdoorsy Brings RV Ownership Into the Digital Age

Saving…
Outdoorsy Brings RV Ownership Into the Digital Age
2020 RAM EcoDiesel: Be a Rebel, Get a Diesel
×