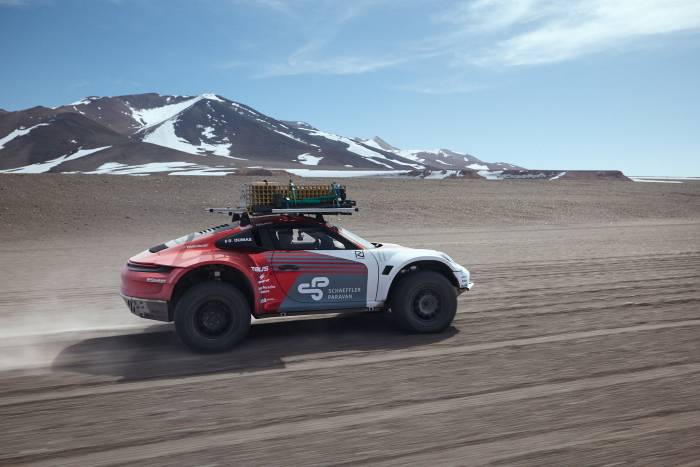 Porsche took two specially modified 911s to Chile. One even drove 20,000 feet up the side of a volcano.

Porsche put the 911 to a new and almost unimaginable test. The sports car team went to Chile to drive up the side of the highest volcano in the world.

This PR stunt showcases how rugged the modern 992 generation of the Porsche 911 can be with the right modifications, and it also elevates the excitement level for the soon-to-be-revealed 2023 911 Safari, although Porsche has not officially announced that production model yet.

The Porsche 911 started its off-pavement racing career way back in 1971. Porsche entered five cars in the 4,000-mile-long East African Safari Rally that year, and only one of the five managed to finish.

The off-road 911 really took off when Porsche built the 953, which was a heavily modified 4×4 version of the 911. That car entered and won the 1984 Paris-Dakar Rally and was the basis for the legendary 959.

When the 959 followed up that 953 racing car, the roadgoing AWD Porsche was born. The 911 got its first AWD system in 1988, badged Carrera 4, and since then the option for all-wheel drive has been a key part of 911 performance.

For this Chilean challenge, Porsche started with two copies of its 911 Carrera 4S. They deliver 443 horsepower from their factory-stock turbocharged flat-six engines and are equipped with the available seven-speed manual transmission.

Porsche’s R&D crew in Weissach then worked with Romain Dumas Motorsport to create these volcano-climbing beasts. First, the cars were fitted with roll cages, carbon seats, and full harnesses. Safety was paramount, running to extremes in the remote region.

Then Porsche fitted a massively raised suspension and portal axles. Portal axles add a gearbox at each corner and lower the wheel centers compared to the axle centers. The effect is more ground clearance, and these Volcano 911s now have 13.7 inches of it. That’s half an inch more than a Ford Raptor pickup.

Extremely modified bodywork does its best to cover the tire package. The bumpers have been cut away to let them clear terrain, and massive air inlets where the rear side glass used to live help the engine breathe at these great heights. An aramid fiber undertray lets the 911 slide over rocks when things get a little too hairy.

The last big change is a bit of a mystery. Porsche calls the device the “Warp-Connecter” and says it’s a mechanical link that makes wheel loads constant when the suspension flexes. It sounds like a center diff-locking device accompanied by manual lockers in the front and rear axles.

The trek was far from your ordinary test session. Porsche brought the cars to 19,708 feet above sea level. At that height, the team needed to bring its own accommodations. They also had to cope with half the oxygen you’d find near the ocean.

Endurance racer Romain Dumas drove one of the two 911s and was the team leader. He drove his rally-ready 911 up the side of the volcano. The cars were stopped not by a lack of air, but when they reached walls of ice and snow, they couldn’t get through.

“This was a truly memorable and special moment in a place that’s both beautiful and brutal at the same time,” he said. “I guess the only machines anywhere in the world higher than us today were aircraft!”

Porsche says the point was to show off what the 911 was capable of. We know the real reason for this impressive PR stunt is to tease and get people excited about the forthcoming 2023 911 Safari, Porsche’s first consumer-available Safari-style sports car.

While they haven’t officially announced such a production model, they have long teased it. And we have it on good authority that it will be revealed at the 2022 LA Auto Show in late November. 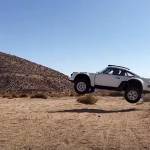 Watch the Only Porsche 911 We Want to Drive Off Road

James Bond meets Mad Max in this cool, custom-built Porche 911. It's stylish, fast, and outfitted to escape the bad guys in a rocky desert. Read more…