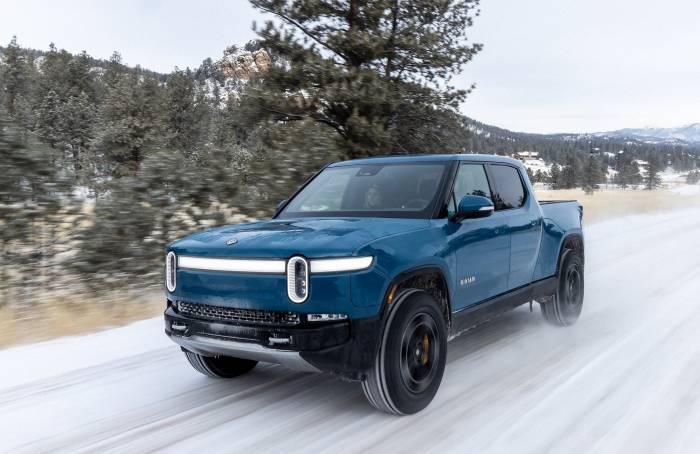 Rivian’s Snow mode is designed to make it easier for the driver to get around in the slippery stuff this winter. It’s not for off-pavement adventuring, but don’t sweat it — there’s a mode for that, too.

Rivian is sending owners an over-the-air update for winter. The latest update for the R1T electric truck and R1S electric SUV makes some tweaks to the driveline’s responses to help you get going in slippery conditions. There are some changes to the remote climate control options as well.

The company’s electric driveline delivers 835 horsepower and 908 pound-feet of torque. That’s enough to challenge the tires in dry weather, even with four-motor all-wheel drive. In snow, slush, and ice, the performance can quickly overwhelm what rubber and physics will give you for grip.

Snow mode helps the driver better manage the power in low-grip conditions in the R1T and R1S. One of the primary ways it does this is by softening the accelerator pedal response.

This is a common way to improve winter traction (and is also often part of how Eco modes work). Delivering less power with the same amount of pedal travel gives the driver finer control over how much power is sent to the tires. It adds resolution so the driver can add less power. It also helps smooth how quickly the power is delivered (or pulled back) if your foot is shaky because of reflexes or even bumps in the road.

Rivian’s Snow mode also helps to stop the wheels from locking up when you’re slowing down. In very slippery conditions, excessive regenerative braking can be enough to put the tires into a skid. Snow mode adds a new “Low” brake regeneration setting, the default setting in that drive mode. Rivan’s changes to how the vehicle transitions into Auto Hold are also meant to help you stop more smoothly in the snow.

Snow mode is meant for pavement, says Rivian, not for off-roading in the fluffy stuff. For that use, the automaker says the Off-Road All-Terrain mode is still the best.

Rivian’s 20-inch all-terrain tires wear the three-peak mountain snowflake badge that designates them as winter capable. This new drive mode is meant to make things a bit easier in the snow— not to replace proper tires for the conditions.

The EV will even suggest you switch to Snow mode if these conditions are met: if it’s below 34 degrees F out, you’re in Conserve mode, and if wheelspin is detected by the computer.

With the latest version of the Rivian app, owners get some pre-conditioning options that were notably missing before. You can turn on the front and rear heated seats using the app now, for example. The same goes for the heated steering wheel. You can also turn on defrost through the app once climate control is turned on.

Tidal is now on the list of integrated music apps. Users will be able to create and view a queue of the next songs to be played using the Tidal app as well as Spotify.

Rivian says it has improved both soft and stiff adaptive damper modes. The former should give a smoother ride, the latter better handling. Regenerative braking can now be used for longer durations and in more conditions. There are numerous bug fixes, including for Sleep mode, which Rivian details on its blog. 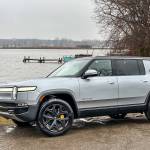 2023 Rivian R1S Launch Edition Review: Not Intuitive but Worth the Effort

We spend a week in the Detroit winter finding out what the 2023 Rivian R1S Launch Edition SUV is all about. We came away impressed but found a few flaws. Read more…