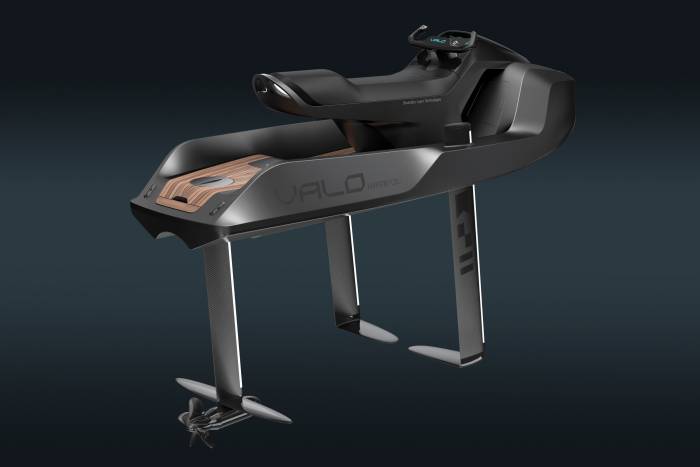 The Boundary Layer Technologies Valo Hyperfoil is one-part PWC, one-part luxury yacht, and one-part semi-autonomous hydrofoil. It is all-the-parts cool, and we want to ride it.

Are you ready for a flight over water? Hydrofoils are the answer, and Boundary Layer’s newest project is a glimpse of the future: a personal electric levitating watercraft.

It could be the fastest foiling vessel in the world and possibly the most exhilarating emissions-free way to travel.

We Were Promised Speeder Bikes

George Lucas tempted us some 32 years ago, and humankind has thus far failed to produce hovering motorbikes with Ewoks riding pillion. This author for one feels cheated.

Ed Kearney, co-founder and CEO of Boundary Layer Technologies, is here to make our dreams of personal speeder bikes a reality — that is, if you have a suitable body of water nearby.

Kearney was kind enough to share a few minutes discussing the technical details of “hyperfoil” technology with us. He could play a remarkably good “Q” from the James Bond series, and his team of engineers are building the ultimate getaway vehicle.

Dubbed Valo (pronounced like halo), this is the world’s first foiling personal watercraft (PWC). Using hydrofoils, the Valo will “fly” 2 feet above the water — like a speeder bike! Hydrofoils dramatically reduce the drag of the vessel, giving Valo a projected top speed of 58 mph.

Valo’s 80kW electric motor should make this lightweight craft exhilarating, and provide enough oomph to carry a passenger. It should fly for about 1 hour, 40 minutes at a cruising speed of 40 mph — covering about 65 miles — with just a pilot and a full charge.

It could be the ultimate commuter for those who live on waterways.

If you’ve ever tried an e-foil board, you’ll understand just how quiet and smooth electric hydrofoil propulsion can be. It’s truly a zen experience. They are also eerily silent, especially when compared to traditional PWCs. There is, however, a very real learning curve to e-foil boards, and they require a different kind of balance and finesse compared to other sports.

Don’t worry though, athleticism and balance won’t be a requirement on the Valo, as computers do the hard work for you. The retractable carbon fiber hydrofoils feature active control surfaces that change angle and lift in real time.

Height sensors, accelerators, and rate gyros on the craft will keep the pitch and yaw stable throughout the flight. It’s a serious feat of engineering, and it’s no exaggeration to say that the Valo is equipped with semi-autonomous capabilities.

When we prodded Kearney that robots take the fun out of driving he revealed Boundary Layer’s plans for a “performance mode.” Experienced riders will be able to exercise more control, leaning into turns with connectedness like a motorcycle. The Valo even has a yoke, like an airplane — or Tesla Plaid — for directional control. It sounds like a phenomenal experience that we can’t wait to try!

Hydrofoiling craft are having a moment as marine transportation tries to decarbonize. Foils offer an order of magnitude of less energy consumption than conventional displacement hulls.

While attending the Electric & Hybrid Marine Expo in Houston in November, we spoke with the team behind Candela’s P-12 foiling ferry and asked the difficult question: What happens when you run into a log? As it turns out, the P-12 has already done this in the Puget Sound without any major damage. After a quick systems check they found no damage and their vessels have logged thousands of miles of service.

If the Valo were to hit the same object, however, the result would be much more dramatic. Kearney agreed and explained that safety is a top priority. The Valo will be designed to allow for a clean separation between the rider and the vehicle. While any light watercraft would not fare well in this situation, the high speeds of the Valo could be quite hazardous in an impact. When riding at high speeds, you’ll need appropriate safety gear such as an impact vest and a helmet.

Valo: Get in Line Now to Fly Soon

The Valo will enter prototype testing in early Q1 2023, with deliveries of “Founders Edition” vehicles scheduled for late 2023. You can get in line for one with a $1,000 refundable deposit.

When fully released in 2024, production models are expected to start at $59,000. While you can argue that it’s three times the cost of a well-optioned PWC, it’s also a fair price for a semi-autonomous speeder bike — for the water — that has zero emissions.

This is an undeniably ambitious product, but Boundary Layer has been perfecting its technology in the San Francisco Bay Area for the last 4 years. They’re backed by some of Silicon Valley’s most respected investors such as Y Combinator and Chris Sacca. If anyone can pull this off, we’d bet on Kearney and his team, and we can’t wait to see it fly. 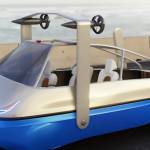