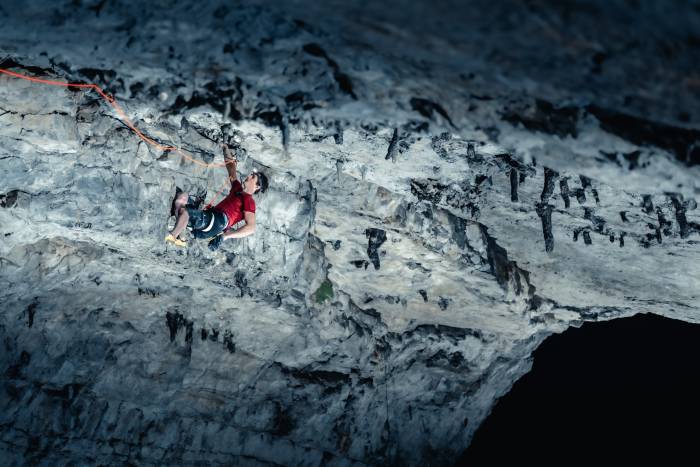 What can stop the world’s best sport climber in his tracks? Wet holds, rotten gear, leering tourists, and a ghost story — none of them make the list.

In Adam Ondra’s backyard of Moravian Karst, Czech Republic, a giant sinkhole plunges almost 500 feet into the earth. A spooky story about the ghost of a guilty stepmother shrouds Macocha Cave in supernatural gloom. And steep limestone walls lead out to the mouth.

Are you thinking what I’m thinking?

Ondra apparently was, and right before Christmas this year, he made good on a push to free climb the formation’s only existing route.

Příklepový strop was an old five-pitch aid route, first climbed in 1985 at a moderate (but steep) A3. After that, archaic hardware sat rotting out of the soggy stone for years, above a pedestrian walkway, and under rules that only allowed climbing for one week every year (per Planet Mountain).

Leave it to Ondra. The world’s best sport climber did not miss his opportunity.

The 29-year-old’s free variant of the line includes plenty of 5.14 climbing on its way out of the prominent sinkhole. Ondra managed to link it together despite conditions that, judging from what Planet Mountain said, I’d only describe as “gross.”

Ondra found most of the limestone coated in a thin layer of “typical Moravian Karst dust,” he told the outlet, which made climbing it “significantly” more physical and less secure.

Based on his ascent style, I have no choice but to accept the substance’s reported effect as fact. Ondra couldn’t onsight any of the first three pitches (5.14a, 5.14a, 5.13c), according to Planet Mountain. Instead, he needed two tries to put each one down.

That was a far cry from his reported original plan, which was to link the first two segments into one 70m mega-pitch. But the gunk on the holds wasn’t the only environmental factor working against Ondra’s ambitions. Temperatures in the sinkhole warmed throughout his visit, Planet Mountain said, depositing condensation everywhere.

But the obstacles go on. To make the experience even less comfortable, Ondra didn’t rebolt anything, Planet Mountain said. Two local climbers had retro-bolted the belays and “a handful” of protection bolts on a 2015 attempt, but the rest of the route still featured the ancient, decaying pro as of Ondra’s effort, the outlet reported.

Apparently, though, he still found enough charm in the experience to plan on returning for more. Ondra’s permit now expired, he’ll have to wait until next December to journey back to Macocha for another chance at a clean redpoint.

Saturated holds, rusty bolts, heckling bystanders, grisly ghost stories, and a ticking clock? If there’s one thing the rest of us can learn from all this, it’s that no climb is safe from the screaming ingress of Adam Ondra. 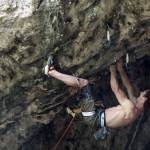 'Real Gem' or Dirty Pile? Ondra Gets a 5.14d First Ascent in the 'Leaky Cave'

Adam Ondra deals with the 'dirty job' of climbing amid cobwebs and dirt while exploring new routes in a Slovakian cave. Read more…