A new business-reality TV show can turn upstart inventors into major outdoor-industry innovators with loads of venture capital (or deny their idea on the spot).

“I can’t tell you exactly what it is yet, because the show hasn’t aired,” teased Craig Cooper, co-host of CNBC’s Adventure Capitalists. “But it’s one of the coolest products we’ve seen — an underwater jet-propulsion system that can turn the average swimmer into an underwater Ironman.”

Ideas like that are the figurative thrust behind the hour-long, four-episode series that launched last week. Entrepreneurs hock their prototype ideas to Cooper and his co-hosts, Jeremy Bloom and Dhani Jones, in hopes of receiving acclaim and the promise of a big check.

In the show’s premiere, three young brands, some we’ve featured, made their pitch. Electrafin, a remote-powered propulsion jet for SUPs; the Fusar helmet-mounted action camera, GPS, and communication system; and an “extreme environment” tent from SlingFin.

Cooper, 53, who co-founded Boost Mobile and is an ardent mountain- and water-sports athlete, hopped on a call with us to give insight into what works and what doesn’t when serious engineers and inventors want his attention (and his investment). 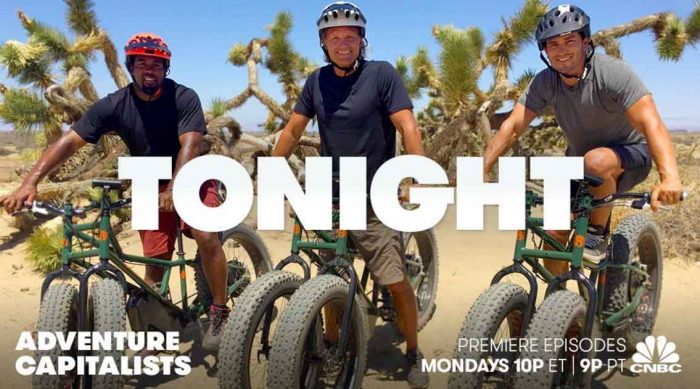 Cooper stressed that upstarts should research thoroughly who they are serving and who else is serving them.

In a perfect world, your product fills a need for an unserved market and becomes the stalwart of that category.

But, he added, “if it’s an existing market with established competitors, your product has to be exponentially better than theirs.”

In other words, you need to shift consumers’ attention. That means be the first or be the best.

Is It A Hobby Or A Business?

Despite the old adage, it’s nearly impossible to not mix business with pleasure in the outdoor industry. But to make it as an entrepreneur in this sector, according to Cooper, “you have to treat your hobby like a business.”

That means putting the day-to-day minutiae of creating a budget, drafting a business plan, or steering a company ahead of a day on the slopes or hitting the waves (most of the time).

Put simply, you have to want to run a business at least as much as you want to go camping, climbing, biking, or hiking.

Raise Enough Money, But Not Too Much

If you’re pitching an idea to a venture capitalist, you need money. And money can get messy.

For starters, there’s the seemingly obvious issue of raising too little capital. If you have a prototype and a plan (and a defined market), don’t short sell your ask. Investors expect their money to sufficiently scale up and grow the business, providing the return for their investment.

By contrast, upstarts can also fall victim to raising too much capital. “The best founders use capital efficiently, but [new] entrepreneurs are often not as prudent with funding and spend money too freely.”

Surround Yourself With People Better Than You

“The best CEOs and brands have a team with members that excel at what they do.”

Cooper’s advice is a testament to the value of knowing your weaknesses and trusting the people who work with you. Your breakout product might be your baby, but it takes a whole team to grow a brand that will last.

Whether it’s a financial leader, or a development team, fill the positions your business needs with people better at managing those needs than you. Recognize what you bring to the table and focus your efforts there.

To impress Cooper, it might help to know what he already uses. From adventure and obstacle races to day hikes and mountain biking, he’s always looking for great gear. Here’s a sample of the products he thinks do it right.

–Have an idea? Interested in pitching it on CNBC’s Adventure Capitalists? Visit the show’s application page.