An unknown brand sold 7,000 jackets touted as potentially lifesaving on Kickstarter. But the SafeAnchor ‘Life Saver’ feature lacks testing and could put lives at risk. 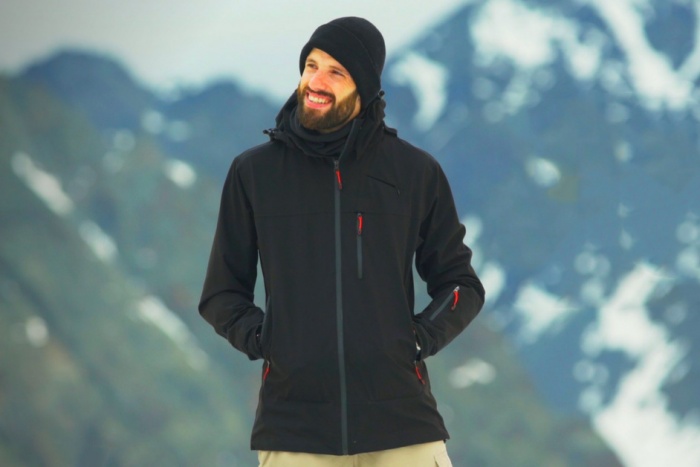 Editors note 8/21/17: The Apricoat team has responded to our article with an updated design and improved safety strategy for the SafeAnchor. The different feature is outlined in our article here.

Last week we reported on a dangerous feature found on a Kickstarter-funded jacket. The company responded with plans for a redesign. Read more…

The Apricoat jacket has more than 16 unique design features. But one of them could lead to serious injury if actually used for its intended purpose.

The brand touts a built-in “SafeAnchor Life Saver.” This feature, the brand says, can hold “up to 400 pounds.” Marketing materials show it used as a hoist in an emergency rescue scenario.

However, experts in the search and rescue field are hesitant to trust their lives to the device.

“You start telling people you’re going to save their lives, you better be able to back that up,” says Ron Funderburke, Education Manager of the American Alpine Club and AMGA-certified rock climbing guide. 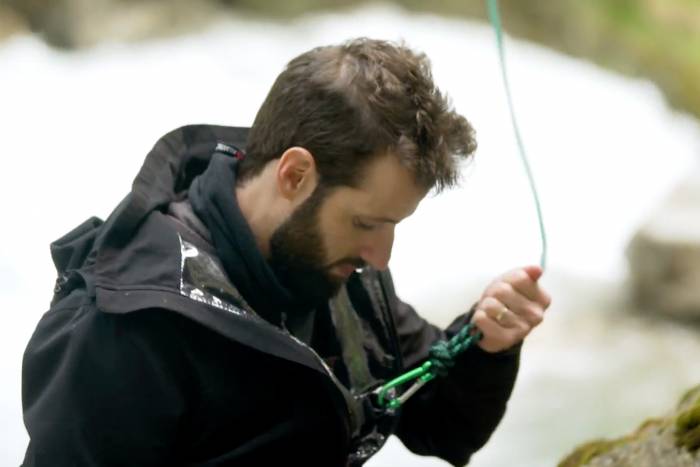 We spoke with AMGA guides, the American Alpine Club, and the UIAA to understand weight limits and the potential dangers of the Apricoat.

The bottom line: Apricoat markets the SafeAnchor as a potential rescue device. But experts note a lack of respected third-party testing and insufficient weight rating could result in disaster.

The SafeAnchor is basically a sling around the jacket that connects with two D-shape clip points. As seen in Apricoat’s Kickstarter video, and this gif (below), the jacket-wearer clips in both points with a carabiner and rope, and holds on.

According to the brand: “SafeAnchor is a potentially life-saving emergency clip that can carry up to 400 lbs.”

The brand’s marketing material shows the jacket in a hoisting scenario. The product could be dangerous if used as portrayed. The marketing even uses a clip not designed for climbing instead of a carabiner in the portrayal.

The 400-pound limit is enough to hoist a static load; that limit should be enough for anyone who can fit into this coat. But the concern is that a short fall, where the rope goes slack and then tight again as weight is absorbed, can easily muster more than 400 pounds of force.

Certified climbing and safety gear, in contrast, is often rated to hold thousands of pounds. In addition, the common dynamic ropes used in rock and alpine climbing are made to stretch and absorb force.

Funderburke said that while it would take 400 pounds of static weight to break the device, “a lesser weight in motion could easily do it.”

We interviewed the designer of the coat. He said it was made for hikers and travelers, and not exclusively intended to be used as a climbing or rescue device.

The danger lies in the marketing, which could encourage uninformed consumers to use it as a safety or rescue device.

Why The Apricoat Could Be Dangerous

On the surface, the SafeAnchor feature may appear a benign and fun addition for the weekend warrior. But it could turn deadly if trusted as a rescue or safety device.

For example, a 200-pound person may assume they are safely within the 400-pound limit. But forces exerted by rescues (or falls on climbing gear) can easily go far beyond that weight rating.

Third-party testers like Rock & Ice magazine and gear brands including Petzl have published studies on the weight or force placed on climbers in a fall. The studies take lead and top-rope climbers at various points in climbs and subject them to falls. In most cases, even the lightest falls exceed the SafeAnchor’s 400-pound weight limit.

These numbers illustrate how easily massive forces can be generated during a fall onto a climbing rope. And if a consumer unknowingly used a static rope instead of a dynamic climbing rope to secure themselves (for example, while working on a roof), the force could be greater even in a short fall.

The UIAA (International Climbing and Mountaineering Federation), founded in 1932, is the global authority for climbing and mountain sports. It is recognized as such by most climbers, gear companies, and parties including the International Olympic Committee.

The first to certify climbing gear, the UIAA makes standards for third-party testers to ensure climbing equipment is strong. The UIAA works to help minimize accidents in mountaineering and climbing.

To certify what the UIAA labels as “connectors” or carabiners, it measures for strength when loaded over an edge. Connectors must withstand a minimum load of 8 kN (or roughly 1,800 pounds). That is the same figure used by OSHA for safety harnesses.

The strength of carabiners on their most commonly used orientation is upwards of 20 kN, or 4,400 pounds. Put another way, you’d have to seriously misuse a UIAA-certified carabiner to exceed that weight limit.

Pick up just about any piece of climbing equipment from a retailer and it will show the UIAA badge of approval.

As for the Apricoat, “The UIAA doesn’t have a jacket standard,” said the UIAA Safety Commission President, Dave Custer.

The UIAA safety label on a piece of mountaineering or climbing equipment displays “it to be of the highest international standards for safety,” according to the UIAA website.

We reached out to Alon Partuk, product designer of the Apricoat, to learn more about the intended uses of the jacket.

The Apricoat touts itself as an “adventure” coat. And the SafeAnchor is just one of many features in the jacket. We admit, some of them are pretty cool. 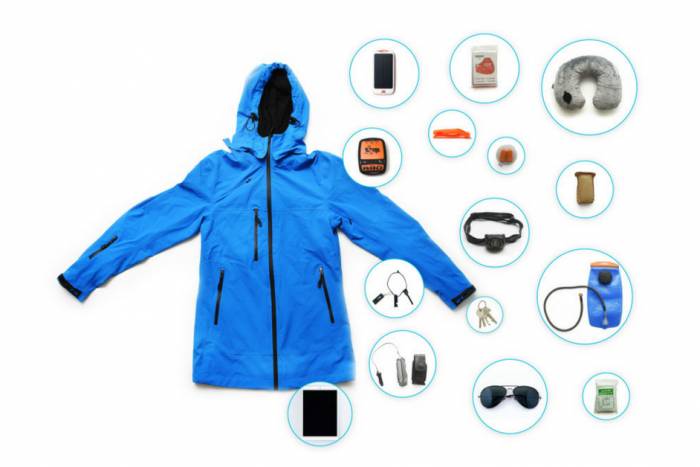 The D-shape rings on the jacket are made to be used much like carabiners. But they do not have near the strength of the UIAA standard.

Funderburke thinks load-bearing equipment should be tested to similarly functioning equipment standards. He referenced Mammut’s Realization belay pant, as an example. The pants have built-in anchor points that you can belay and rappel from.

“Mammut had those pants submitted to the same safety label specs as any harness, and it met those specs,” Funderburke said. “I don’t see any indication that this jacket is doing that. Nor at 400 pounds would it meet that specification.”

Mammut took a new genre of climbing apparel (pants that also function as a harness) and tested the equipment to the same standards as a climbing harness.

How The SafeAnchor Was Tested

To achieve its 400-pound weight limit, the Apricoat team tested it themselves. They then sent the jacket after production to a quality assurance program used by Apricoat’s manufacturing plant to verify its construction and standards set by the brand. Partuk did not explicitly name the third-party or the factory in use.

They also tried pulling each other and used it “to help a friend when they go through hard, rough trail.”

Partuk explained the jacket can hold more than 400 pounds, but “we didn’t know exactly when it should tear apart.”

Apricoat did not apply for a UIAA safety label or other major certification. Instead, Partuk explained, “this is something that we will consider later on. We are only the beginning, this is a Kickstarter campaign.”

However, more than 7,000 backers purchased the jacket and were promised a possibly life-saving feature now, not later on.

Partuk has a degree in business management and worked as a project manager for an IT firm.

The Kickstarter does not mention to backers that the SafeAnchor’s weight limit is far below standards set by OSHA or other recognized climbing or rescue organization.

Apricoat also does not state whether it underwent third-party testing from a major certification, like UIAA or CE. This information is crucial to prevent misuse and injury.

The Apricoat is marketed to hikers and travelers, not necessarily people that understand weight limits, or how easy it is to reach 400 pounds of force in a fall. The potential for misuse in the SafeAnchor is real, as the terms “life-saving” and “safe” are used.

For an item on Kickstarter to reach more than $1 million in funding, 20 times its initial goal, is a significant milestone. With more than 7,000 backers it’s hard to pinpoint exactly why people choose to buy this jacket. (At the time of this publication, the Apricoat received $1,200,000 from 7,600 backers)

There are nine days left in the Kickstarter with the first batch of orders going out in November. So nobody owns the jacket yet.

People could want the jacket for its waterproofness, its insulation, a self-inflating pillow in the hood, the SafeAnchor, or any combination of the Apricoat’s features.

However, every jacket sold will include the SafeAnchor. Every owner of the jacket will have the ability to perform “rescues.”

Of the 430-plus comments left by backers on its Kickstarter page, a couple asked about the SafeAnchor. Most were curious about colors, the waterproofing, and sizing.

Ryan on July 11 asked how the SafeAnchor lifts and how it stands up to wear. “Can you demo the lifting? Does it destroy the jacket ? Maybe some other extreme durability test? I really like the look of this jacket and am very excited to back it!”

The Apricoat Team responded on July 12: “HI @Ryan! Thanks for the great feedback! The introduction of a demo at the campaign stage is problematic. The SafeAnchor is not supposed to be for a daily use and to replace a harness, SafeAnchor designed to use in an emergency, or in a situation like securing friend while hiking in tough areas.”

While people likely won’t use the SafeAnchor to replace a harness, something claiming to be “life-saving” and for emergencies could have serious consequences if the gear fails.

Of course, it is up to the backers to deem if a product is worth their investment. Products fail on Kickstarter and Indiegogo from time to time.

Kickstarter doesn’t issue refunds, as transactions occur between backers and creators directly. And as this product isn’t in production yet, the brand may have time to revise or omit this feature, or change marketing to more cautious uses of the device.

But for now, backers be warned: If you hit 400 pounds of force during a fall, hoist, or other emergency, the SafeAnchor may not be as life-saving as advertised.

Up Next: Down Revolution: Eddie Bauer To Launch ‘Down Fabric’