In the 1970s, groups of eastern sportsmen and conservationists fought to protect wilderness from destructive clearcutting. Their legacy of preservation has continued, most recently in the form of a strong public push for an area in West Virginia called the Birthplace Of Rivers.

Today, a consortium of environmentalists and sportsmen are fighting to turn Birthplace Of Rivers into a flagship National Monument, the first of its kind in the East. It would be the first to break free from the statues and forts that now define eastern national monuments.

We became familiar with the area this summer via the “Live Monumental” campaign, which is sponsored by KEEN. Birthplace Of Rivers is one of multiple areas the campaign is helping to protect.

It’s Wild Out There

“You can get lost for days in the Birthplace Of Rivers,” says Mike Costello from the West Virginia Wilderness Coalition.

He’s not kidding. At 122,320 acres, the Birthplace Of Rivers is massive, especially when you couple its size with its expansive red spruce forests, peaks to 4,600 feet, waterfalls, vistas, and an array of Appalachian wildlife.

Aptly named, the Birthplace Of Rivers contains the headwaters of six of the most cherished rivers in West Virginia. Hiking, backpacking, mountain biking, hunting, fishing, cross-country skiing, snowshoeing, and horseback riding are popular in the area, which is located within a day’s drive of 1/3rd of the nation’s population.

According to Costello, the national monument proposal was created out of a commonly-held desire to “create stronger, more permanent protection against threats of development, while preserving access to the activities West Virginians and our visitors enjoy in this special place.” 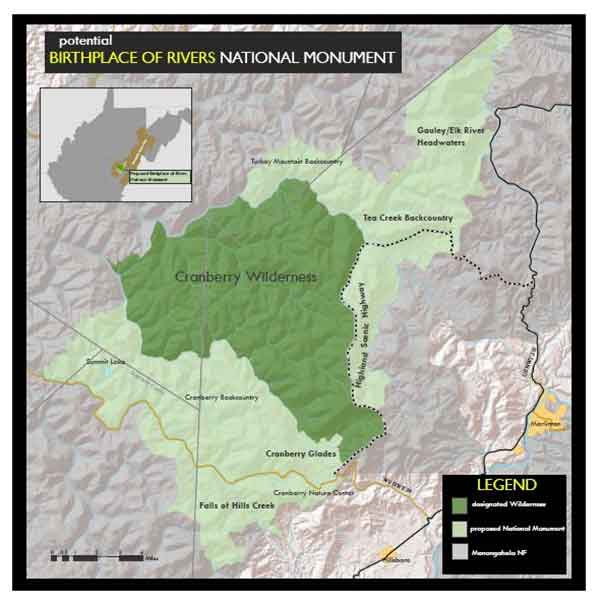 Life in the preserve will proceed as it currently does, the difference will be increased protection and guaranteed public input in future management decisions. Oh, and recognition as the first wilderness national monument of its kind in the eastern United States.

The Time Is Now

With the proposal completed, the petition of public signatures is gaining traction, especially as major outdoor companies like KEEN Footwear join in. Both the proposal and petition are being presented to the Obama administration next week, on September 29th.

Even if the U.S. Congress or President doesn’t sign the proposal right away, the hope is that sometime before Obama’s term comes to a close he will consider the tens of thousands of Birthplace Of Rivers petition signatures and eventually designate the area as a national monument. Obama’s track record on monuments is promising; he’s already designated or expanded 19 national monuments, more than any previous President.

The more public support the better, though, and there’s still time to sign the petition here.

Eastern wild lands deserve protection. Without it, who knows what the future of these beautiful areas will be. By seeking national monument designation, the Birthplace Of Rivers is leading a charge that other eastern areas could soon follow.