Leave it to one of climbing’s deepest-entrenched weirdos to pull off a zany and ambitious film trick — in a situation where name recognition would have gotten the job done all on its own.

Unless you’ve been under a rock for the past decade (like, a really, really remote rock — let’s say a space rock), you know that Alex Honnold is acutely popular.

There’s never been a rock climber more people have spent more time celebrating. Sir Edmund Hillary and Tenzing Norgay may have made the official first ascent of Mt. Everest — but they never won an Oscar.

So from a certain point of view, it’s pretty weird that Cedar Wright opted to pull a rabbit out of his hat with his most recent video production starring Honnold.

Leave it to Cedar, that’s exactly what he did. Check out this Squamish climbing compilation, which Wright and his crew edited, produced, and launched all within the span of 24 hours. 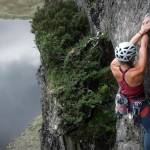 Hazel Findlay Faces Fear on Route That Nearly Killed Her

Hazel Findlay became well-known for sending scary-as-hell climbs. In her latest vid, she returns to the route that almost ended her career.  Read more…