Seen here on the first solo ascent of Alaska's Mount Foraker, Haley is a fixture in Patagonia; (photo/Haley)

As soon as Colin Haley eyeballed Fitz Roy’s Goretta Pillar, he knew what his mission on the route would one day be.

First climbed by Renato Casarotto in 1979, Haley immediately regarded the route for its beauty and its seminal stature for its time and place in Patagonia’s climbing history.

Casarotto went alone on the first ascent, so, Haley resolved, he would do the same. And after a decade of “dreaming,” the 38-year-old made his ambition a reality in mid-January. He reported a successful rope solo (as opposed to free solo) ascent of the closest line to Casarotto’s original that he could manage via Instagram.

To Haley’s knowledge, nobody had rope soloed the roughly 4,000-foot tower in alpine style before. (Casarotto utilized fixed ropes on his 1979 bid.)

“Renato Casarotto was, in my opinion, one of the most impressive alpinists of all time and has been a major inspiration to me,” Haley began. “Named in honor of his wife, the Goretta Pillar is, I think, one of the most beautiful alpine rock climbs in the world.”

Haley advised that he spent the summer in Chamonix, France, polishing his rope solo techniques, anticipating an attempt on the pillar this season. Then when he traveled to Patagonia this winter and good weather provided an opening, he seized it.

The climb required 3 days of ascent. (Haley did not mention the presumably uneventful descent.) Notably, he did not strictly follow Casarotto’s original line — a decision he attributed to climate change, which he said made the route unacceptably difficult and dangerous.

His chosen climbing would require sound decision-making. Rope soloing is massively taxing in terms of workload and mental resilience.

“[I]n the end, I opted for the route Mate, Porro, y Todo lo Demás, which is a somewhat more difficult, sustained route, but with an easier, safer approach,” he wrote. “While I have done a lot of solo alpinism in the past, it has almost always been without bivouacs, so this climb was a different style than I am accustomed to. Also, except for the last 200m of easier terrain to the summit of Cerro Chaltén [Fitz Roy], I self-belayed about 97% of the roughly 1200m route.”

In the end, Haley succinctly reported he was proud of his style on the route — and tipped his hat to Casarotto.

“Despite the extensive use of fixed ropes on the first ascent, I think that Casarotto’s climb, in 1979, was incredible,” he said. “This ascent was a strong experience for me, and I will definitely write a blog post about it when I have more time. For now I will just say that it was a huge challenge, an ascent that I feel very proud of, and share some photos.” 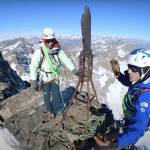 Watch This Alpinist Seek the Threshold of Commitment

If you’re into the risk and drama of singular alpine objectives, you’re in the right place. Read more…