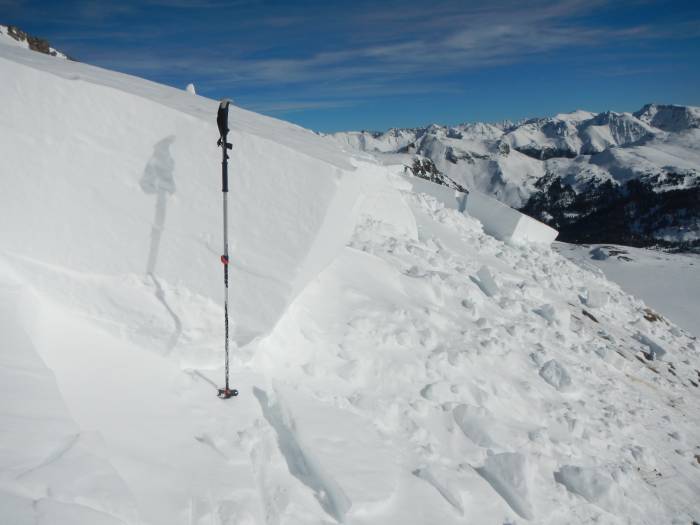 A miscalculation in slope angle coupled with multiple people on an avalanche slope added to risk factors in a fatal avalanche last week.

The Colorado Avalanche Information Center released a detailed report about a tragedy in the Colorado backcountry. The report reveals lessons for those who travel in avalanche country.

“This accident is especially troublesome as it involved a group of well-trained and well-equipped people in an avalanche safety class,” the CAIC wrote in its report.

This article distills the information of the in-depth report. We urge those who travel in the backcountry to read the full report for details.

In short: The group of skiers descended the slope in short succession, resulting in the whole group caught in the slide. A second slide propagated from an adjacent slope, burying one skier under 8 feet of snow. The slope angle was not read accurately, adding to misjudgment of the danger of the terrain. The group also did not recognize the potential hazard of a second slide on an adjacent slope, which killed the skier.

Avalanche Fatality in Senator Beck Basin: Day of the Tour

On the day of the tour, the avalanche forecast was moderate, level 2, at all elevations. The CAIC rated persistent slabs as the only avalanche problem. While this rating is relatively common for Colorado’s notoriously tricky snowpack, avalanche risk remains.

After a day of touring, around 2:41 p.m., the group was at around 13,000 feet. They were descending the mountain when a first avalanche let loose. Two skiers on the slope were carried to the bottom of the slide path, including the instructor. Four other skiers were also caught but carried a shorter distance.

The instructor at the bottom of the path was able to unbury himself. The other skier at the bottom was buried by a second avalanche that propagated from the first slide.

The group took an estimated 50 minutes to dig Marshall from the snowpack.

The CAIC pointed out “two issues that came up while we were documenting this accident that we hope will help people use the CAIC forecasts to avoid accidents.”

First, avalanche forecasts come in three parts. The CAIC reported that the group didn’t read the “Summary” portion of the forecast. In the summary, the CAIC noted that there was “potential for wide propagation and remote triggers.” These ultimately resulted in the second slide.

A second problem arose from the slope aspect — the direction the slope faces. The CAIC report details that the group worked to avoid higher-risk slope angles, but that its travel brought it very close to a higher-risk aspect.

“The group was purposely traveling on what they determined was a shallow south-facing slope to avoid Persistent Slab avalanche conditions. During our visit to the site, we measured the slope aspect where the group entered the slope at 160 degrees. The aspect of the terrain in the cirque rolls from due south to southeast, east, and eventually northeast. Although the group was traveling in the southern octant, they were very close to the southeastern octant and traveling below southeast and east facing terrain,” the CAIC reported.

One major takeaway from the report is that backcountry travelers must not rely entirely on published slope assessment tools. According to the CAIC report, the group used “common digital tools to look at shaded slope angle layers draped over terrain models or topographic maps.”

We have also used these tools, such as CalTopo, extensively in route-planning prior to backcountry trips. And they work well as a preplanning tool.

However, the CAIC report points out that these tools are not exact. While the group planned its route to avoid slopes over 30 degrees, it triggered the avalanche on steeper terrain.

“We measured slope angles during our visit to the accident site. Measured angles ranged from 32 to 34 degrees on the slope the group was descending when the avalanche released,” the CAIC reported.

The CAIC report concludes that the group did not take any slope angle measurements before their descent.

Travel One By One

The avalanche caught six people and carried two to the bottom of the slope. The group was lucky that more people were not buried or killed.

“By our estimate, if Skiers 3, 4, 5, and 6 were a few feet higher on the slope the avalanche would not have caught them. If they were a few feet to the west, they may have been carried to the bottom of the slope. The group failed to plan and execute their descent in a way that minimized their exposure to a potential avalanche and that allowed the members to communicate,” the report states.

The man who died in the avalanche was wearing an airbag. It was not deployed when he was recovered, although the CAIC did determine that the system was functioning properly and the trigger was out of the pack strap.

A second skier who was caught also wore an airbag. It also did not deploy. The CAIC determined that the trigger was not correctly assembled.