The outdoor apparel industry lost an icon on Sunday morning. Gert Boyle, known for her gritty presence as ‘one tough mother’ in Columbia commercials, died today at age 95.

Gert Boyle lived an amazing life. Born in Augsburg, Germany, on March 6, 1924, she was just 9 years old when Adolf Hitler came to power. Most of her Jewish family, the Lamfroms, fled Germany in 1937.

She settled in Portland, Oregon, where her father purchased the Rosenfeld Hat Company. He changed the name to Columbia Hat Company, and the seeds of what would eventually become the global brand Columbia Sportswear were sewn.

Boyle attended the University of Arizona, where she met her future husband, Neal. They married in 1948, and Neal went to work for the family business.

The business grew, but tragedy threw her a curveball when Neal, then the owner of Columbia Sportswear, died unexpectedly of a heart attack in 1970. Boyle inherited the family company and, together with son Tim, transformed a business valued at just $1,400 into a multi-billion-dollar global company.

In 2018, ISPO, the largest outdoor industry show in Europe, awarded Boyle the ISPO award for her legacy.

“She has given the world’s best performance — a performance that has fascinated me for decades and that I believe is as admirable as all the previous ISPO Cup winners,” said Flori Schuster, CEO of Sport Schuster, at the awards ceremony in Munich.

Boyle became the iconic face of the brand in the 1990s, starring in many commercials as the “one tough mother” who helped her son through comic product testing and chided him to make better gear. After a decade-long hiatus from the brand’s marketing, she reemerged as a public face to pitch the brand in 2015 with a new marketing campaign.

Through business and product development, she fostered an air of toughness that extended into her private life. At age 86, she even thwarted a burglary in her own home.

In 2010, police say a gunman tied up Boyle and “roughed her up.” The robber held her hostage, pilfered jewels, and looked for valuables in the home. But Boyle had the chutzpah to rally against her captor. She foiled the robber, who police later caught, by tripping a silent alarm at her home.

Her son, Columbia CEO Tim Boyle, told GearJunkie of his mother’s legendary strength in an interview in 2018.

She published the book “One Tough Mother: Taking Charge in Life, Business, and Apple Pies” in 2006.

It is with great sadness that we announce the passing of Gert Boyle, the Chairman of the Board of Directors of Columbia Sportswear Company and its matriarch since 1970. Our “One Tough Mother” held many jobs at Columbia, from seamstress of the first fishing vest to President to advertising icon. Her sharp wit and wisdom helped propel the company from near bankruptcy in the early ‘70s to the global multi-brand company it is today, with annual net sales of almost $3 billion in 2018. Her pioneering role as a woman in what was then a male-dominated industry is a testament to her strength of character and ability to persevere through difficult situations.

Gert’s humor and business savvy were sought by many people at Columbia Sportswear Company and she was truly beloved. Gert was unique and we feel fortunate to have had her as a leader for over almost 50 years.

In lieu of flowers, please consider a donation to Oregon Health and Sciences Knight Cancer Institute. An announcement will be made about a celebration of Gert’s life soon. There is much to be celebrated. 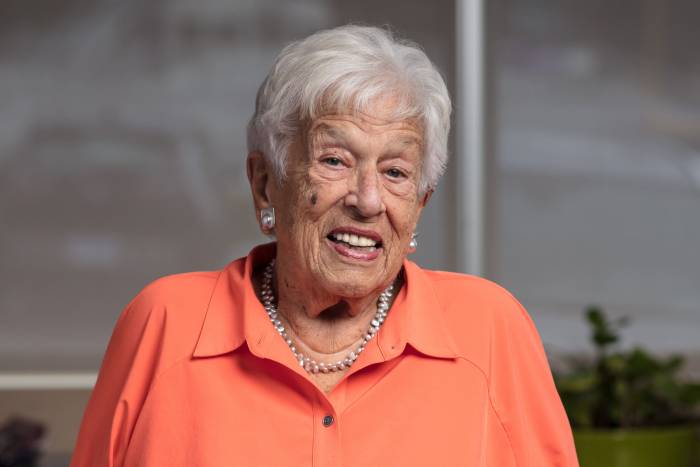 GearJunkie offers our condolences to Boyle’s family, friends, and employees.