Ingredients for a great adventure: a backpack, hiking trail, friends, beer. But alcohol? Not always.

Mother Nature, let’s do this. That’s Dogfish Head’s slogan as they ramp up their beer selection — and partnership with The Nature Conservancy — to get folks outside.

“We want to invite beer and nature lovers alike to get outside and enjoy the splendor of the great outdoors,” said Dogfish Head. And with that invitation comes a more inclusive beverage offering: a new NA beer designed in partnership with The Nature Conservancy.

Dogfish Head’s first NA (non-alcoholic) beer was quietly announced during Earth Week, but hit shelves this week. We read up on this new brew and even taste-tested it with the founder to get a sense of where Dogfish Head is going. 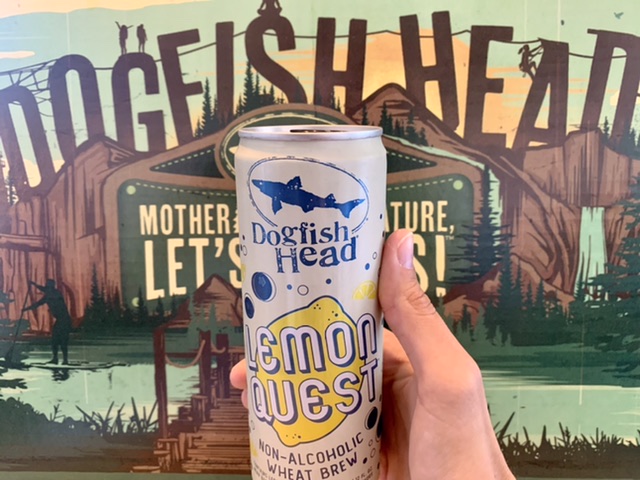 Introducing Lemon Quest: the brew that gives back. Lemon Quest is an “active lifestyle-oriented, non-alcoholic wheat beer.” It’s everything you’d expect with a name like Lemon Quest — light, crisp, with just a hint of sweetness and a bit of pucker. It’s brewed with the following ingredients:

Most NA beers are wheat or lager-style brews, although there are some companies making craft and IPA-style NA beers. Dogfish Head went with the market favorite for its first, focusing on light and crisp, and channeling notes of citrus.

“When we were first founded, we really wanted to focus on including culinary ingredients in our beers, in addition to the standard hops, yeast, water, barley,” said Dogfish Head’s founder and Chief Brewer, Sam Calagione. “And we wanted to do that with this beer as well.”

According to Dogfish, the most requested style beer that non-drinkers want is a fruited wheat beer, based on its focus group testing. I am not one for heavily fruited drinks. Luckily, this isn’t that.

Now for the taste test. This beer surprised me. It’s a wheat beer, but also an NA beer — and not what I expected.

The Lemon Quest starts slightly sour and finishes slightly sweet, with a smooth mouthfeel. It’s not watery, not too light, and not too sweet — in fact, it packs a bit of a sour punch.

The Nature Conservancy is a global environmental nonprofit “working to create a world where people and nature can thrive.” Its mission is to conserve our planet’s nature, lands, and waters on which all life depends.

This year, Dogfish Head partnered with the nonprofit to design the Lemon Quest can in an effort to help customers to embrace the outdoors. Since its NA beers launched, the brewer has donated upward of $52,000 to The Nature Conservancy in promoting the org’s “Mother Nature, Let’s Do This” initiative. If you like being outside and NA refreshments, it’s a partnership of epic proportions.

Since 2007, Dogfish has worked to raise funds for the conservation of The Nature Conservancy’s preserved lands in its home base of coastal Delaware. To date, Dogfish Head has contributed more than $1 million to its local Delawarian chapter.

Wyoming Whiskey is debuting two new whiskey collections on April 20. And Harrison Ford is in on it. Read more…

The Agility Synthesis is a popular Merrell trail-running shoe. This week, the outdoor brand teamed up with brewer Dogfish Head on a more sustainable version. Read more…

Up Next: Subaru of America Announces First Electric Vehicle, the Solterra