Permanent reauthorization of the Land and Water Conservation Fund hangs in the balance and may soon perish before an obstinate Congress and president.

The next victim of the soon-to-be longest government shutdown in U.S. history may be future generations’ access to wild, undeveloped spaces.

The 116th Congress received a political softball this month with a bill to reauthorize the Land and Water Conservation Fund, as popular a measure as you’ll ever find in the current social climate. But it looks like partisan rivalry will win (again) over leading the country toward prosperity.

And that’s not the only place frustrations are boiling over in the outdoors world. Columbia today made waves with its own public stance.

The Portland-based outdoor giant took out a full-page ad in The Washington Post, urging the government to end the shutdown and reopen national parks. And with landmark legislation to permanently reauthorize the Land and Water Conservation Fund (LWCF) now rocketing toward a stalled Congress, the outdoor community may feel it very soon. 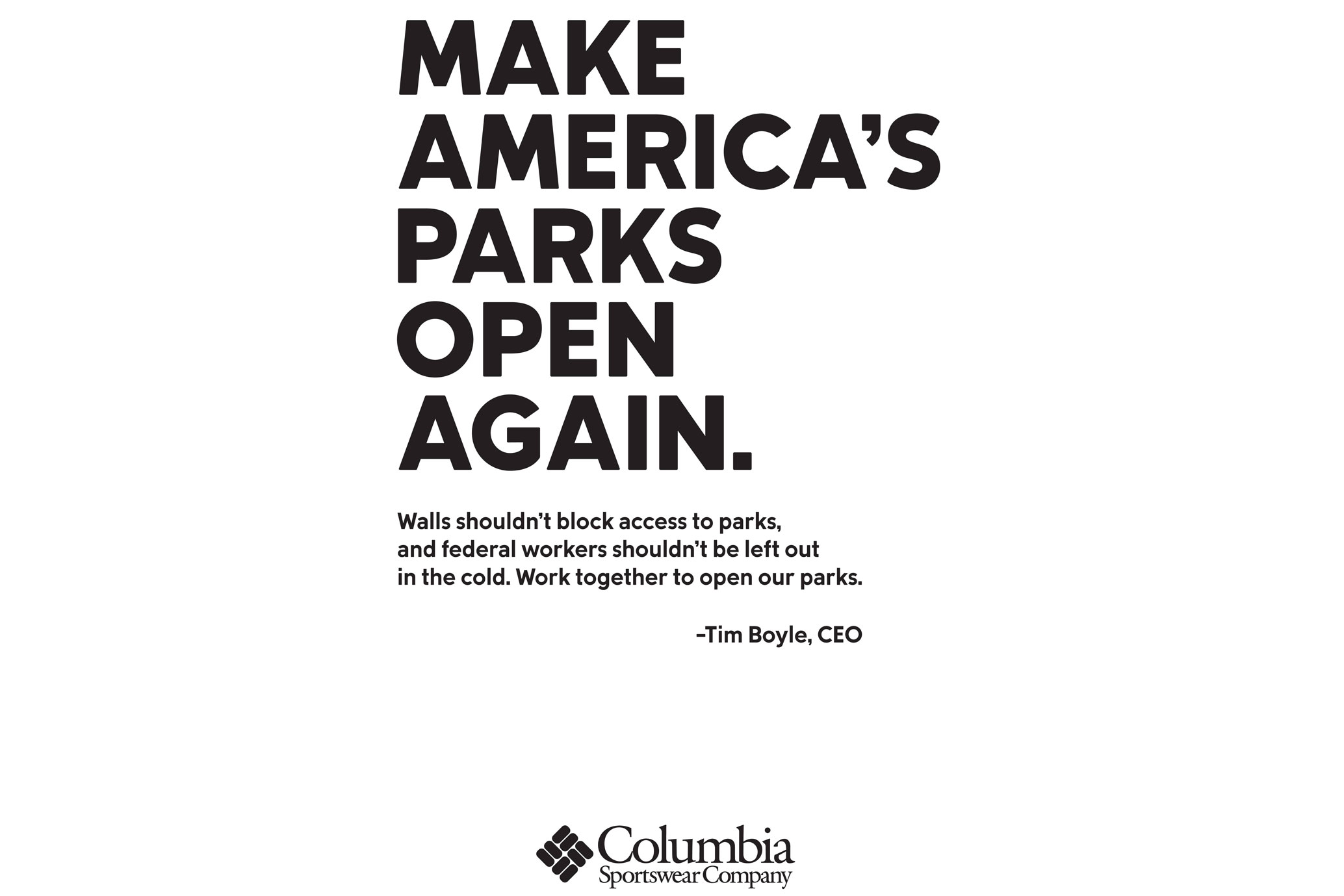 And before the 115th Congress adjourned last month, Republican and Democratic senators co-authored a bill that would permanently reauthorize America’s most historic conservation initiative. Among other actions that target wilderness designations and protections, S.47 would strip the expiration of the LWCF and reauthorize it indefinitely.

While its impacts are too numerous to count, the LWCF — first enacted in 1964 — is a crucial mechanism for creating and protecting public access to outdoor spaces. You can read about some of the fund’s most critical functions here.

Congress already dropped the ball on reauthorizing the bill once. It expired last summer. And according to some, including Backcountry Hunters & Anglers — one of the country’s preeminent conservation advocates — S.47 might be the last best chance the LWCF has.

“While BHA stands with the federal resource workers and others impacted by the government shutdown, we urge Senate members to reach agreement on a path to advance this well-meaning package as soon as possible,” said Land Tawney, BHA president and CEO. “We can’t let this opportunity slip through our fingers again.”

Despite its recent introduction last month, the bill received a fast-track designation through an interesting senatorial mechanism known as Rule 14. By enacting the rule, Senate Majority Leader Mitch McConnell (R-KY) authorized the bill to bypass usual procedural hurdles like committee markups and go before a full vote. Presently, S.47 is scheduled to be voted upon next week.

However, with the federal shutdown casting a bleak shadow over the entire nation, many Senate Democrats have promised to vote down any bill that doesn’t put an end to the shutdown. And in spite of S.47’s bipartisan and public support, it may die in a political war of attrition without so much as a thought.

There aren’t enough fingers to point anymore. Senate Democrats may be doing a disservice to public lands by taking their hardline stand. And Sen. McConnell may have fast-tracked the bill to simply shift blame. And the President may do well to heed his own words, spoken years ago as a candidate, during a previous shutdown under a different president:

Regardless of what side of the wall debate you fall on, the nation remains in peril. And initiatives like the LWCF were entrusted to us to pass along to future generations because our public lands and wild spaces underpin the prosperity of this country.

So please, government — do your damn job.