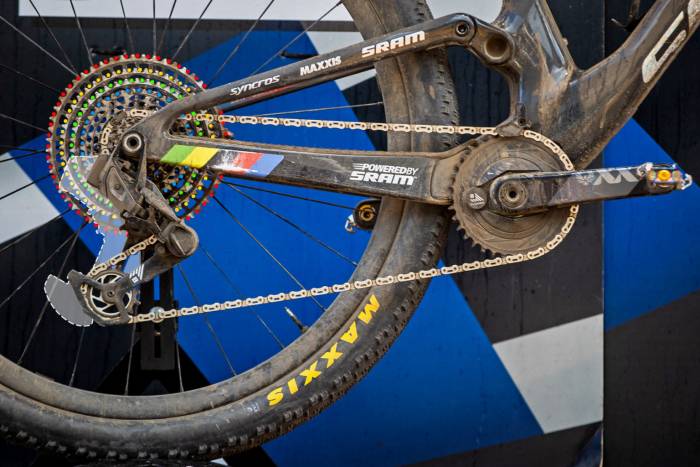 By selecting a modular structure for its next-gen mountain bike derailleur, will SRAM alleviate a primary issue with direct-mount rigs?

Typically, riders running direct-mount rear derailleurs fear one outcome: any breakage or failure anywhere on the unit will require them to replace the whole thing. Especially anyone using electronic shifting, which can be abrasively expensive.

SRAM sought a solution: how to build a direct-mount rear derailleur you could repair as a series of parts rather than have to replace it as a whole.

We’ve been sneaking peeks left and right at the next evolution of SRAM’s top-tier direct-mount XX1 Eagle AXS derailleur ever since Nino Schurter rode it to a record 10th XC MTB World Championship last summer. But we’ve been discussing the SRAM direct-mount solution for more than 4 years.

Will a modular construction solution address the biggest longevity concern that our readers and editors have voiced since then while helping save the planet a bit at the same time?

Before now, SRAM has generally limited real serviceability in all but its top tier of derailleurs. This statement from the patent is exciting (if basically incomprehensible to the layperson):

Translation: If you break some part of your top-end SRAM derailleur, a universal or lower-cost GX part may get you back on the trail.

That’s significant because while the shifting benefits of direct-mount rear derailleurs sound nice, many cyclists (including both our readers and editors) have worried that the rough-and-tumble life a derailleur leads will result in unwelcome service expenses.

The low-cost, replaceable, sacrificial derailleur hanger has protected expensive rear derailleurs for decades — but as mentioned, finding the correct replacement part can be famously tricky.

Meanwhile, a SRAM UDH costs $16 and works with an ever-wider range of derailleurs. However, you don’t get direct-mount benefits. A direct-mount derailleur should have fewer misalignment issues from a bent or twisted hanger, which can occur from minor impacts or mishandling. It should also shift better due to a more rigid mounting point. So while you might want a direct-mount setup, a range-topping SRAM XX1 AXS derailleur runs $753.

The writing on the wall is clear: Crashing or simply hitting a trailside rock could be a costly problem. I know many who hold the philosophy of never riding a derailleur they can’t afford to replace when it’s invariably damaged.

So, why not make one that’s reparable in parts?

SRAM’s direct-mount derailleur may be getting rid of the conventional derailleur hanger, but it looks like a replaceable hanger of sorts is here to stay.

Thanks to the UDH interface quickly becoming a universal standard across many bikemakers, the Eagle mounts to the frame at the thru-axle rather than at an auxiliary attachment point below. It looks like two hanger elements sandwich the frame’s dropout (ABi & ABo), and a lower plate (HG) holds them together and serves as the basis to hang the actual derailleur below.

Interestingly, the inboard ABi side of the hanger has more than one variant (shown in Fig. 7), suggesting compatibility beyond the UDH standard interface. Perhaps that will help bring backward compatibility — allowing riders to mount a SRAM Eagle to older, non-UDH bikes.

In SRAM’s lengthy patent documents, the brand goes deep into why it’s gone down the direct-mount route.

Essentially, the logic breaks down into improving shift performance across modern wide-range 12-speed drivetrains (which are more sensitive to derailleur hanger misalignment than ever) and to an environmental benefit.

SRAM cites momentum against the “throwaway mentality” to explain the modular rig’s sustainability benefit. A move toward “increasing demands on the service life and reparability of technical products,” SRAM said, is the key to a more environmentally friendly rear derailleur. Bringing back the idea of replacing a damaged part rather than chucking an entire assembly sounds excellent.

Zooming out, the XX1 Eagle AXS modular direct mount rear derailleur will also come as part of an entire drivetrain. I expect the complete drivetrain to arrive very soon. SRAM has not officially announced a release schedule for the setup yet — but I’ve got my eyes peeled for when it does. 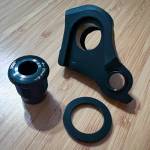 Nearly every bike that can shift gears has a small, unassuming part that goes unnoticed 99.9% of the time. Read more…