Home » News » National Parks Scramble To Keep Up With Crowds

There’s no denying that the “Mighty 5” campaign has been remarkably successful, introducing people from around the world to Utah’s natural wonders and allowing the state to cash in on its scenic beauty.

But the massive increase in tourism has left Park Service officials scrambling to manage the crowds without damaging the landscape. After all, the agency’s mandate is to “conserve the scenery, natural and historic objects … by such means as will leave them unimpaired for future generations,” not simply to enable the parks to function as economic engines for nearby communities.

State tourism officials devised the “Mighty 5” campaign in 2012. As Vicki Varela, director of the Utah Office of Tourism, likes to say, “Mother Nature played favorites” with southern Utah’s iconic red-rock landscape, and the state is eager to share it with the rest of the world.

The award-wining campaign generated nearly 375,000 visits between March and December 2013 and saw a return of $126 for every dollar invested. For Arches, that translated to an increase from just over 1 million visitors to 1.3 million that year, a number that’s expected to exceed 1.5 million by the end of 2015.

“It’s been wildly successful,” Varela says of the campaign. “In Europe, the Mighty 5 is now on everyone’s bucket list.”

The campaign has been a boon for the parks’ gateway towns, many of which shifted from extractive industries to a tourism economy in recent decades. According to a 2015 study by the nonprofit Headwaters Economics, visitors to Arches and nearby Canyonlands generated over $145 million for Moab in 2014. That same year, visitors to Zion National Park spent over $170 million in the much smaller town of Springdale.

Zion National Park Superintendent Jeff Bradybaugh acknowledges the park’s importance to the local economy, but said that the increased number of visitors is straining park staff and infrastructure and threatening natural resources –– even creating a public safety hazard at some of the more popular attractions. At Angels Landing in Zion, crowds queue up along an exposed ridge crest while clinging to a safety line 1,500 feet above the canyon floor.

At the Emerald Pools, people routinely step over one another vying for a spot to enjoy the scenery, and the park’s shuttle system, implemented in 2000 to alleviate vehicle congestion in the canyon, is now regularly overwhelmed, with as many as 120 people packed into buses designed to seats 68.

“I don’t think we are in a sustainable situation,” Bradybaugh says.

State, local and federal officials agree that congestion is a problem but argue that, from an economic perspective, it’s better than having no visitors. Most favor finding better ways to manage the crowds rather than seeking to discourage them, and the idea of determining the parks’ actual carrying capacity has so far proven unpopular.

In Moab, where park officials have been asking the local community for suggestions, a range of possible solutions will be released for public comment later this month. In addition to building more parking lots, roads and entry stations, the proposal includes an innovative “timed entry” or online reservation system that would encourage visits at less-crowded times and draw more attention to some of the less-popular destinations.

Cannon says that the system would take some getting used to, but that it would be better than spending an hour in line and then another hour looking for a parking space. “Our main concern is improving the visitor experience,” she says.

Colin Fryer, who owns the Red Cliffs Lodge and three other hotels in Moab, says managing people’s experience isn’t the Park Service’s responsibility. He opposes the reservation system. “Anything you do to make it harder for people is just like putting up a barricade,” he says. “It’s an unwelcoming idea, and it wouldn’t be good for business in Moab.”

Instead, Fryer advocates building more parking lots as well as paving the road through Salt Valley, on the remote north end of the park, to accommodate more traffic and disperse use.

“They are just going to have to accept that it’s not going to be a pristine experience,” Fryer says. “People need to drive in, take their pictures, leave some money, and drive away. These are the people whose experience we need to improve.”

Scott Groene, executive director of the Southern Utah Wilderness Alliance, believes that national parks should not be used merely as local tourist traps. He supports finding alternatives to automobiles (a shuttle system was proposed, but deemed too costly) and implementing daily visitation limits.

Paving the Salt Valley road is a bad idea, he says, and moving larger crowds into the backcountry would only fragment habitat and destroy solitude, all the while increasing management and rescue costs.

“Reining in the Mighty 5 promotion campaign is part of the solution, too,” Groene says.

As scenic landscapes become more commercialized, and gateway communities continue to grow, the National Park Service may find itself in an impossible situation.

Both Cannon and Bradybaugh say that protecting the visitor experience is of primary concern, and they understand the economic importance of national parks to local communities. “It really is a question of sustainability,” Bradybaugh says. “We can’t just always build more facilities.” Bradybaugh says his staff will be considering possible solutions over the next year, seeking to determine what are the “desired conditions,” without making any predetermined decisions.

Cannon notes the conflict often inherent between protecting natural and cultural resources and providing for visitor experience. “It’s couched as a scientific question, but it’s really a value judgment.

How many people can be here and still enjoy the values that the park was established to provide?” she asks. “But it’s so wonderful to have these phenomenally beautiful, culturally rich places for people to enjoy. It’s well worth struggling with these questions.” 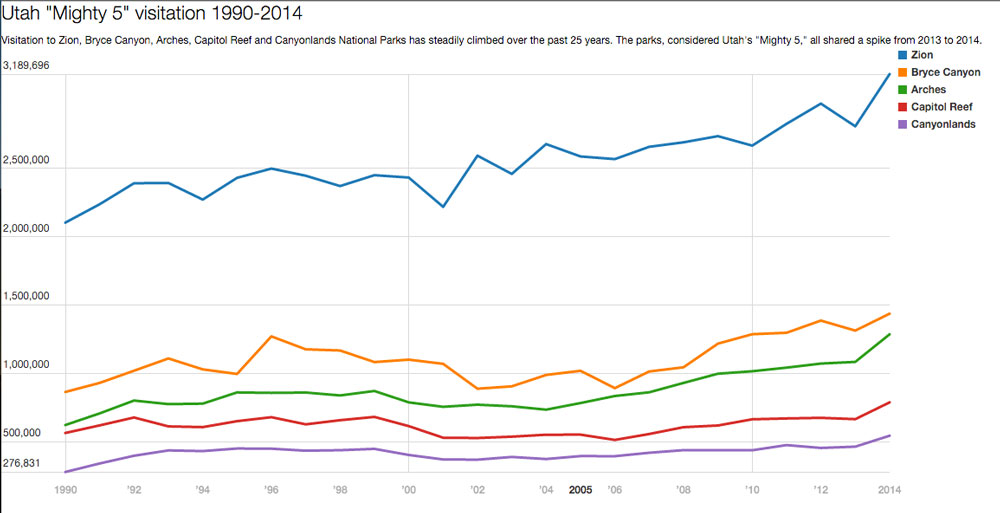 –This article originally appeared in High Country News, HCN.org. Author Eric Trenbeath is a writer based in Moab, Utah. Graphics made with National Park Service data by Paige Blankenbuehler, an editorial intern for High Country News.

Saving…
Scott Jurek Breaks Appalachian Trail Record
Do It Now: How To Ditch Your Life & Travel The World
×