Outdoor recreation spending in the United States is valued at $887 billion. But state by state spending figures, released last week by the OIA, reveal some surprises.

Skiing, hiking, fishing, even lakeside rollerskating: They all factor into the OIA’s yearly economic impact report. And following President Obama’s 2016 passage of the REC Act, which factors outdoors spending into America’s GDP, outside activities weigh heavily in the national economy.

OIA’s state-by-state breakdown of those spending and participation numbers provides a nuanced picture of the way we recreate outdoors.

Jobs, consumer spending, tax revenue, wages, and salaries lead the report. But this interactive national map lets you click through to drill down deeper into each state. 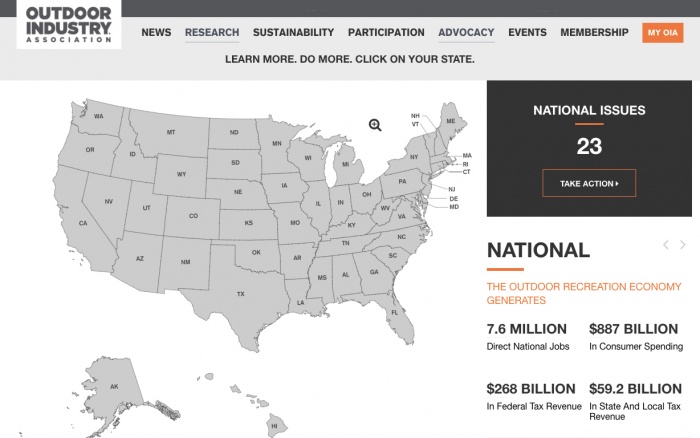 There, you can find outdoor recreation participation numbers among residents, a comparison of outdoor spending against other economic sectors, the most popular outdoor activities for that state, and more.

We pulled a few of the most intriguing stats, culled mostly from participation numbers and consumer spending. But for more info and to take action on outdoors issues, check out the OIA’s full report and policy news.

Colorado is widely considered one of the paragons of outdoor recreation. The Rocky Mountains are one of America’s iconic national treasures and the state is synonymous with climbing, hiking, skiing, snowboarding, and rafting. The Outdoor Retailer trade show recently selected Colorado for its new home.

But Florida generates $58.6 billion in outdoors consumer spending, more than double Colorado’s total of $28 billion. This could reflect the cost of popular year-round coastal activities like sailing, boating, and deep-sea fishing versus seasonal inland sports like hiking, climbing, and skiing.

Per capita, Colorado would still top Florida on outdoors spending. Colorado’s population of about 5 million is just a quarter of Florida’s 20 million residents.

Utah is home to five national parks, third-most in the country. And it’s a destination among outdoor enthusiasts for everything from SUPing to cycling, canyoneering to snowboarding.

Yet Alabama brings in more money for outdoor recreation, $14 billion compared to the Beehive State’s $12.3 billion.

The Alabama state report shows that ATV riding and fishing are the most common activities, and could be mainstays for more residents than more Utah’s rugged but possibly less expensive activities like hiking.

It’s worth noting, however, that 72 percent of Utah residents participate in outdoor recreation, far exceeding the 55 percent among Alabama residents. Also worth noting is that Alabama has nearly 1.8 million more residents than Utah, which could certainly contribute to higher numbers.

California takes the crown for most consumer spending at $92 billion annually.

But the Golden State lags behind Nebraska when it comes to participation, 56 percent vs. 61 percent.

Landlocked smack in America’s heartland and home to all the topography of a dinner plate, Nebraska only generates $5 billion, among the nation’s lowest totals. But Nebraskans seem to enjoy what they have a little more than Californians.

It’s not too surprising to find that Alaska and Montana aren’t huge economic powerhouses when it comes to consumer spending. Each state only pulls in about $7 billion annually for outdoor recreation.

Still, Alaskans and Montanans spend more time outdoors than anywhere else in America.

About 81 percent of residents in Big Sky Country and The Last Frontier recreate outdoors.

One prominent trend is the contrast in participation between eastern and western America.

Virtually the entire Eastern Seaboard has below 60 percent participation.

New Jersey is the punchline to its fair share of Thank-god-I-don’t-live-there jokes. But to its credit, it rakes in nearly $19 billion, a respectable total for its size and lack of notable outdoor tourist attractions.

Still, less than half of New Jerseyans participate in outdoor recreation.

According to the OIA, a mere 46 percent of residents reported playing outside last year. That’s staggering considering the breadth of potential outdoor activities: running, hiking, biking, camping, walking, bird-watching, wishing upon a star—all less appealing than a drive on the turnpike.

Up Next: Scientists In Bear Suits Study Human Pee-Goat Link