Eleven months after Pocket Outdoor Media swallowed up Outside Integrated Media and appropriated its name, the benchmark magazine’s staff formed a union.

On January 4, 15 editors at Outside magazine released a document simply titled “Mission Statement.” In it, they advocate for better working conditions within the company, air their grievances, and announce their unionization.

Pocket Outdoor Media rebranded as Outside when it acquired the multiple assets belonging to Outside Integrated Media in February 2021. The suite included Outside magazine, Outside Studios, and the travel business publication Outside GO. Several more acquisitions in the following months brought its total assets to around 40.

Pocket Outdoor Media not only acquired Outside Integrated Media — including a magazine, a TV program, an app, and more — it's also taking on the name. Read more…

Outside Editors Band Together

Since its launch in 1977, Outside magazine has exerted a massive influence on the outdoor industry. The publication paved the way for many of its predecessors, and its readership now includes 38 million people a month across platforms.

The new union’s 15 members all work for Outside magazine in editorial capacities. Their complaint appears to revolve around a classic corporate squeeze: Get fewer people to do more work for little pay. It also mentions a recent uptick in employee turnover and suggests that editorial work guides the conglomerate’s influence in the industry.

“Outside’s standing as an industry leader is owed significantly to the editorial staff,” it says. “Over the years, as Outside staff numbers have dwindled and job responsibilities have multiplied, salaries and benefits have failed to account for those changes. Since last year, editorial teams have shrunk, and overall turnover has been more than 35 percent.”

According to the statement, the group saw unionization as “the only” bulwark against ongoing budget cuts and pay stagnation. Structurally, the group is working with the Denver Newspaper Guild and Communications Workers of America to ask Outside Inc. (Outside magazine’s parent company) to recognize their unit voluntarily.

The statement also appears on an Outside Union Twitter feed. Read it in full below. 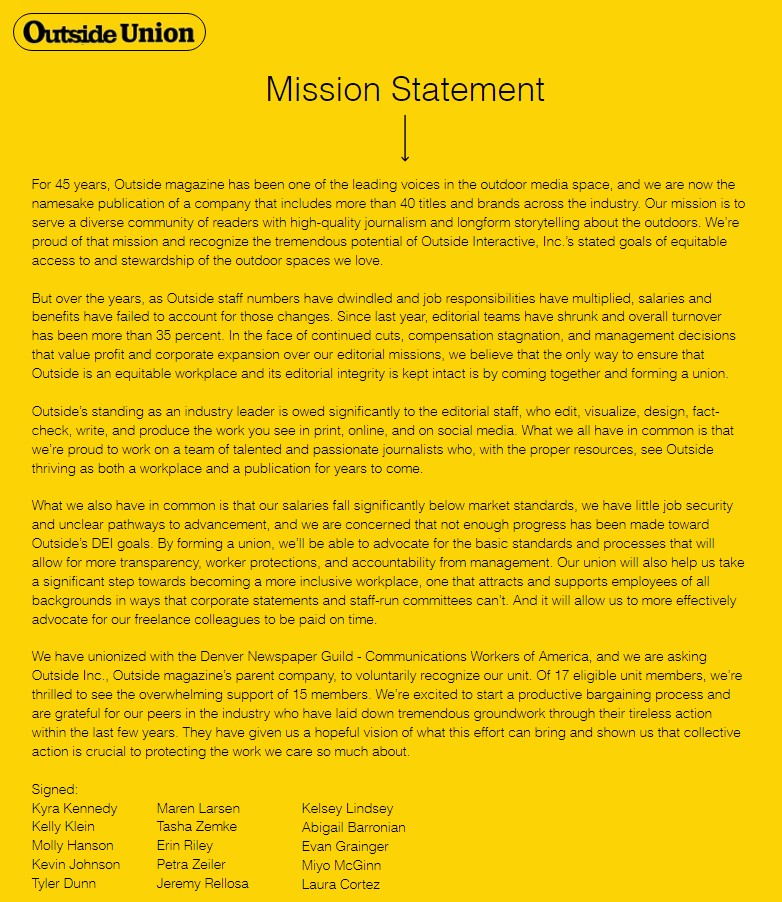