Towering more than 28,000 feet, K2’s lethal face has proved one of the last remaining challenges for cold-weathered alpinists. This year, a team hopes to become the first to climb K2 in winter. 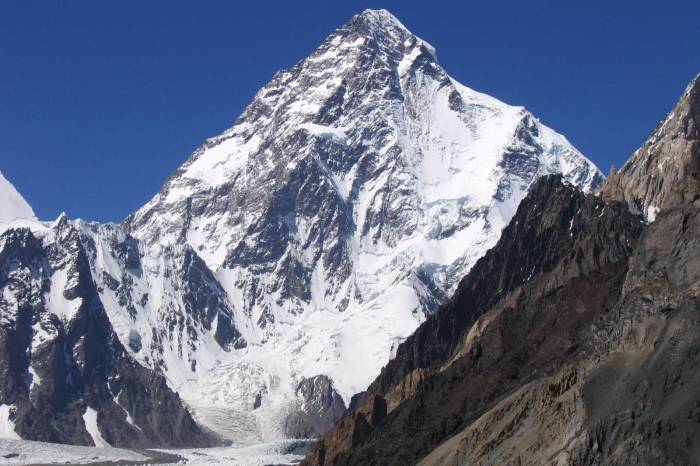 This January, a veteran Polish team will try and make history by scaling one of the world’s most dangerous mountains during the worst season of the year.

Earth’s second-tallest mountain is the ultimate alpine challenge. It has eluded numerous expeditions (and killed many climbers) since the first summit in 1954. Only 306 people have stood on the summit, compared to Everest’s more than 4,500.

Over the course of several months, the team led by Krzysztof Wielicki will set up multiple camps, ropes, and routes for the ascent. The Polish Ministry of Sport and Tourism provided 1,000,000 Polish zlotys (about $200,000) in funding for the trip. Many believe that, if the mountain is going to see a winter ascent, this is the team to do it.

Located in Pakistan’s Karakoram range, K2’s peak is second only to Everest, at 8,611 meters (28,251 feet). The mountain is deadly, with a quarter of expeditions resulting in fatalities. Seventy-seven people have died climbing the mountain, often after they reached the top.

Part of the mountain’s unique challenge is its remote location and steep approaches. The average incline is much steeper than other 8,000-meter peaks, and it has numerous sections of rock and ice climbing.

The mountain sits about 55 miles from the nearest village. More than 100 porters have already carried more than a ton of equipment to set up base camp for this expedition. Unlike Everest, K2 is so rarely climbed that each expedition must establish its own base camp.

As for the route, the team will take weather and mountain conditions into consideration and decide once they arrive.

Did you know that K2 is thought to have a curse against women? Read our list, from Pakistan to New Hampshire, of the world’s 10 most dangerous mountains for climbing. Read more…

The 13-member team is full of both young and seasoned climbers who spent the past two years training for the expedition. The members trained around the world but honed skills most notably in Poland’s Tatra Mountains and the Himalayas.

Polish climbers have long been regarded among the best alpinists, particularly in cold conditions. In fact, Wielicki, the expedition leader, was the first to climb Mount Everest in winter. The first female ascent of K2 was by a polish woman, Wanda Rutkiewicz, in 1986.

Winter will make everything more difficult during the group’s attempt. Deep snow, varied climbing, and well-below-freezing temperatures are expected. But that, apparently, is also part of the fun.

Only three teams have tried K2 in winter – one of which included Wielicki, who could not clear 8,000 meters.

Successful or not, the team expects to return sometime mid-March.