A new map reveals the ambient noise outdoors around America. If you’re seeking proverbial peace and quiet, look to the blue areas below. 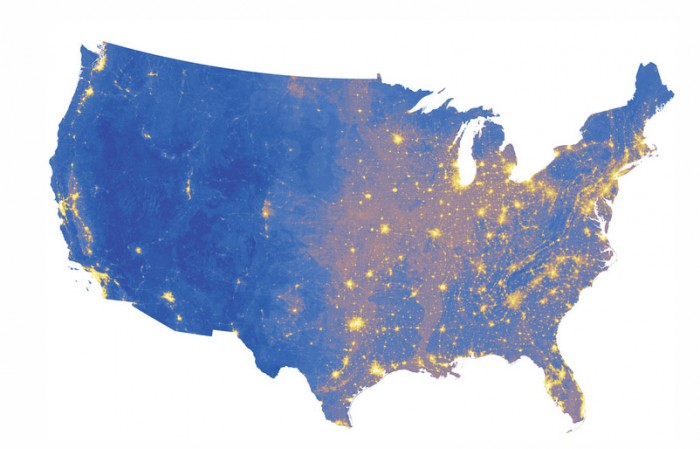 Look above: The brightest yellows show the noisiest places in the U.S. with the highest noise levels at 55-67 dB. The quietest places are deep blue with levels down to less than 20 dB.

Noise levels are based on median daytime summer sound levels, and the map shows the West’s quietest places often coexist with its noisiest.

Colorado’s Great Sand Dunes National Park is nearly as quiet today as before European colonization, and yet, partly because of its silence, air traffic from Denver International Airport can be audible there.

The park, with its lack of wildlife- and water-sounds, represents one kind of silence; other wild places, such as Idaho’s City of Rocks National Reserve, mask noise like air traffic with the sound of running water and rustling vegetation.

The National Park Service recently conducted a study of noise levels across the U.S. The study maps noise levels — the bluer the quieter — based on conditions like temperature, precipitation, and, of course, proximity to human activity.

“Westerners are quite lucky,” says Kurt Fristrup, senior scientist with the agency’s Natural Sounds and Night Skies Division, which conducted the study.

“A lot of the deep-blue places are here in the West. At the same time, noise is extending into the landscape in these spider-web patterns, along roads. Industrial development is now penetrating places that were recently wild.”

It’s a new approach in the decades-old study of silence, enjoyed by humans and essential to animals.

“Being able to hear and survey what’s going on around you is a critical part of survival,” Fristrup says. “For wildlife, it’s literally a matter of life and death.”