Home » News » Why REI Will Skip ‘Black Friday’ This Year

REI rocked the world of outdoor retail this week with its announcement to shut down all 143 stores on Black Friday. We interviewed the company to gain some perspective on a business move most retailers could not fathom. 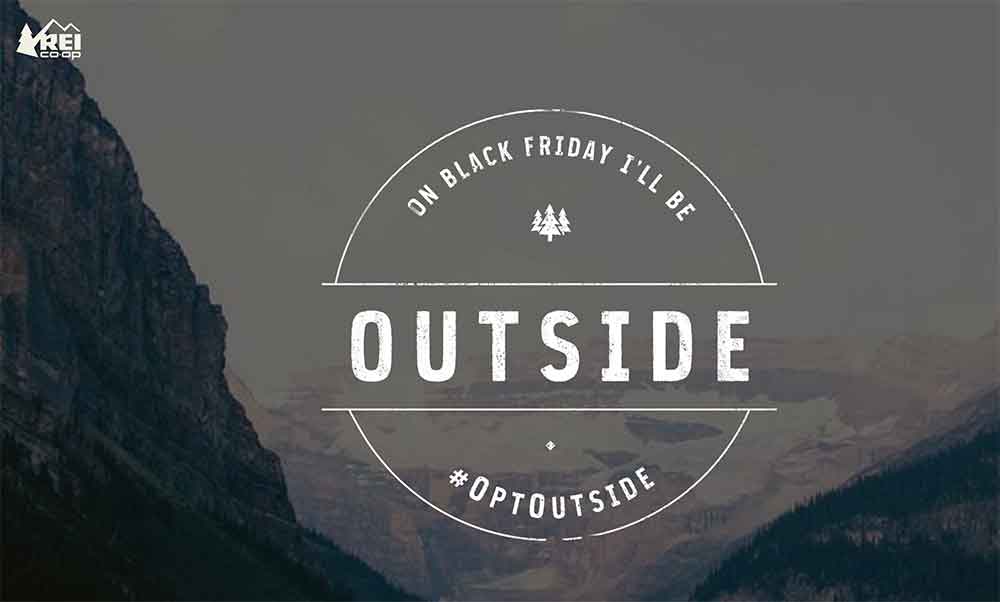 The news this week went viral, with hundreds of thousands of GearJunkie readers engaged. (See: “REI To Skip Black Friday.”) To dig in a bit deeper, we jumped on an interview with one of the Seattle co-op’s executives, Ben Steele, who serves as Chief Creative Officer and has been involved with the #OptOutside project since the start.

The big shopping day after Thanksgiving, this year on November 27, is a veritable national holiday in America, with companies offering deals, opening doors early, and consumers flooding into the aisles to buy. But it’s gotten out of hand, REI believes, and the news this week is that the retailer will lock up for Black Friday, giving its nationwide staff of 12,000 the day off and encouraging everyone to get outdoors and to sync with a concept called #OptOutside.

GEARJUNKIE: Quite the announcement! What are your plans, personally, for Black Friday, as you now have the day off?

BEN STEELE: I am glad you asked that first! It’s weather-dependent here in Seattle that time of year, but I was hoping to organize a group bike ride in the morning to go around Lake Washington, and then after that we’re heading to the North Cascades, my wife and daughter and I, to hike or snowshoe.

REI employees did not know until Monday. Then you told 12,000 people. What was the reaction?
Some longtime employees, or people who have always worked in retail, have noted they have never had the day after Thanksgiving off. One person told me it’d been 35 years. So, they are just still planning what to do, as we just announced it. But I did hear about hiking trips and other ideas from people across the country.

Tell us the back story. Where did the idea to “skip” Black Friday come from?
Early this year, in January 2015, our CEO Jerry Stritzke challenged our team, asking “What should we do for the Holidays?” We realized what we did not want to do, and that was perpetuate the retail frenzy. That led to a conversation around the thought of: “Imagine if we weren’t open that day.” We presented it to Jerry and others, and people quickly got on board.

Can you put in significance this closure of all stores on the biggest shopping day of the year?
It’s one of our top sales day, and we obviously care about that. It sounds naïve, but we ended up as a team having relatively few conversations around the dollars and cents. We understood what the risk of the business side was. But we are a co-op, a different kind of company, and we are thinking longer term, and we’re thinking about our 12,000 employees and 5.5 million members. We are trying to realize the holistic measure of success with this announcement, not the short-term loss in sales.

How have you seen the public respond?
We’ve been overwhelmed by positive responses, both customers and industry partners and brands. Places like Patagonia said “Way to go” and so on right away, and we’ve seen a lot of that.

What did Black Friday mean in years past at REI?
For the business, it’s meant a chance to look at how do you create something big to get people in the door. For people working in the stores, it’s spending Thanksgiving thinking about being there early the next day. Then it usually is a really intense work day.

Is there nervousness internally around this? Was there opposition inside the company?
From the first brainstorm, Susan Viscon, our Head of Merchandising and Product, was on board and led the idea. I have not personally heard a single person naysaying the idea internally. It’s been amazing.

What should people know about the #OptOutside project?
It’s an invitation to talk about how they want to spend their time the day after Thanksgiving. We share ideas on where to go on OptOutside.REI.com to help people plan their activities, recommended from REI Outdoor School guides. REI wants to inspire people to get outdoors on Black Friday.

Does the brand recognize Cyber Monday? What other holiday campaigns will you be running?
For sure, this is not about being anti-deal or anti-sale. We’re a co-op founded on the principle of helping people find the best deals on outdoors equipment. We will have other sales and promotions throughout the year and the holiday season, just not Black Friday.

Is this now a company policy, to skip Black Friday, or is it a one-time thing to reboot this year?
Before answering, realize we’re just going to try and make it through next month first! But, really, you are talking a year away, and we’re not quite there yet. We will judge the reaction after it all, and if the co-op members say it’s awesome, it’s one thing. If not, then that’s a different conversation. We are ready to hear what people will have to say!

Up Next: REI To Skip ‘Black Friday,’ Employees Get Day Off