Returning home to find a burglar had lifted belongings would be bad enough. But what about returning to find the whole structure is missing? 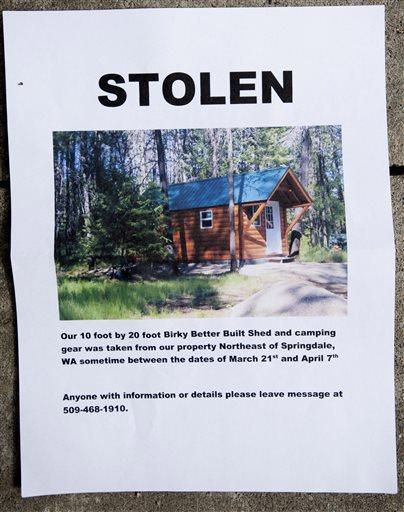 That happened to one family in Washington last week, where an entire 10 x 20-foot cabin went missing. Apparently, thieves were able to hook up and haul away the small home.

On Thursday morning, the cabin was found about 10 miles from its original location, according to a report by the Associated Press.

Authorities say the structure had been placed on stilts and was sitting at the end of a private road east of Springdale, Wash.

Stevens County Sheriff Kendle Allen noted that deputies following a tip found the cabin. Investigators believe whoever took the cabin had been living in it for a few days after the heist.

Sheriff Allen says deputies are getting a search warrant to enter the moved property. He says he has identified suspects but declined to name them.

Soon, we hope, the cabin and the camping gear inside will be moved back to its original location in the Springdale woods.

Up Next: Running Of The Balls?