Home » News » Highlining the Border to 40-Pound Brown Trout: This Week in Adventure

If you need a little inspiration to start your week, consider the story of Gorka Zubeldia’s UTMB CCC finish. Zubeldia was the last person to finish the grueling 101km race from Italy to France along the base of Mont Blanc. It climbs 6,100 m over rugged terrain.

But when Zubeldia crossed the line after 28 hours, 5 minutes, 10 seconds, he hoisted his prosthetic leg in the air as the last certified finisher of the race. Congrats to him and all those who took part in the UTMB series last week.

The final finisher of this year’s #CCC, Gorka Zubeldia! pic.twitter.com/kdHo2jku51

Courtney, a rider for Scott-SRAM, put a U.S. rider on top of the World Cup cross-country overall winner’s board for the first time since 2002 on Sunday. She secured the overall title with a fifth-place finish at the final round of a series held at Snowshoe, West Virginia.

The fifth-place finish was good enough to push Courtney past Jolanda Neff (Trek Factory Racing), who came into the World Cup round leading the standings. Check out the full story about the exciting race and series at Velo News. 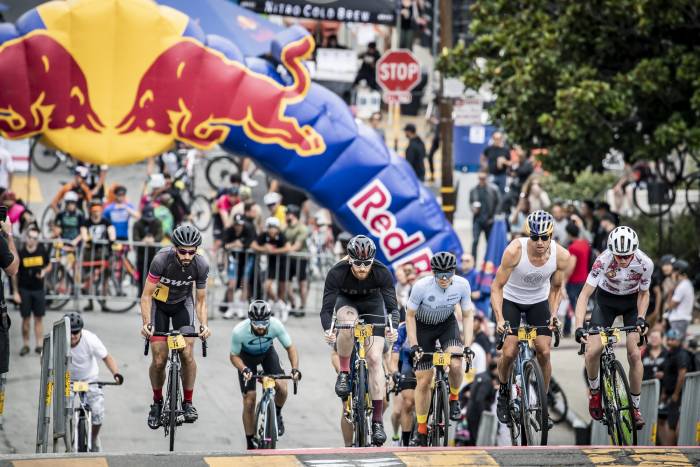 The Red Bull Bay Climb might be the most red-line-inducing race on two wheels. At just 0.32 miles, it seems like a walk in the park. Not so fast. The race climbs up one of the steepest street segments in San Francisco with grades reaching 21 percent!

Muegge proved her metal for the third straight time, powering up the insane sprint to beat one of cycling’s best athletes, Ayesha McGowan of Atlanta, who nabbed silver in the finals.

“No one try to wrestle a mountain lion. It is a cheater.” Those words of wisdom come from an 8-year-old Bailey, Colorado, boy who is recovering after fighting off a mountain lion in his backyard last month.

According to an ABC News story, Pike Carlson was playing with his brother in the backyard when he was suddenly attacked by a lion. “I was just punching, trying to grab anything that I can,” he told the TV station about the August 21 attack. “I did find a stick and I tried to get it in the eye, but the stick snapped.”

We have never seen a brown trout like this. And really, neither has almost anyone else.

Bill Babler landed the monster 40-pound, 6-ounce brown trout out of Lake Taneycomo, Missouri. It measured 41.25 inches long and had a girth of 28 inches. It was 2.5 pounds short of the world record, set in New Zealand in 2013.

Babler intended to release it, but it died while being held in an aerated tank for weighing and measuring. The fish easily beat the previous Missouri record of 34 pounds 10 ounces.

According to a story in the News-Leader, he caught the brown trout by dead drifting a pink Berkley PowerBait worm on 3.6-pound test line under a 7-foot custom-made rod below the mouth of Fall Creek on the upper part of Lake Taneycomo.

However you feel about the U.S.-Mexico border, it’s a fact that country borders are human-made constructs. They are, in a sense, imaginary. That’s the concept that filmmaker Kylor Melton explores in his video, “The Imaginary Line.”

“During the longest government shutdown in American history, we assembled a team from Mexico and a team from the USA to establish a highline across the border between us. ‘In a world that is constantly trying to tear us apart, we are here to come together, to cross those imaginary lines that divide us,'” reports the filmmaker.

Regardless of your political leanings, the film will spark questions and dialogue. At just 10 minutes, it’s certainly worth a watch!

A team of four canoeists led by David Green spent 35 days paddling from Menihek Station on the Labrador Plateau, down the De Pas River, and ultimately to the coastal town of Nain. And it rained the whole time, making it quite the epic!

Up Next: In Dorian’s Destructive Wake, Anglers Raise Big Money to Help Victims