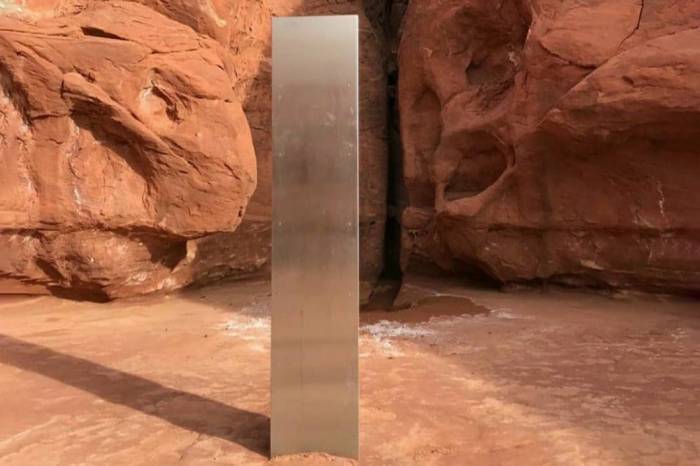 If it doesn’t portend the end of the world, I’m going to be very upset.

Yes, everything you’re seeing on the news is true: There’s a mysterious, silver monolith that has just “appeared” in the middle of the Utah desert. Last week, the Utah Department of Public Safety (DPS) disclosed that its Aero Bureau came across the object — which, based on images, appears to be around 12 feet tall — while conducting a count of bighorn sheep in the area.

Naturally, this sparked speculation of visitors from another planet, rogue eccentric artists, and doomsday prophecies. Even the DPS’ own Instagram asked, “Inquiring minds want to know, what the heck is it?” And added a cheeky alien emoji to really stoke conspiracy theories.

There is no consensus or clue as to where the monument came from. Although, some savvy Reddit sleuths deduced it must have been placed there sometime between August 2015 and October 2016.

And while the mystery behind the monolith grips the internet, we should all try to maintain some healthy skepticism and, most importantly, utter disappointment. Whether it’s aliens or pranksters, this doohickey is the last thing 2020 needs.

As I see it, this metal monstrosity can only be the work of one of three things: an egomaniac, aliens, or time travelers. And regardless of which of them is responsible, they should be ashamed.

An Artist Put It There

Let’s start with the most likely explanation: The shiny metal monolith is merely a sculpture and was put there by an artist. This is the theory authorities have advanced as the most credible.

“I’m assuming it’s some new wave artist or something or, you know, somebody that was a big [“2001: A Space Odyssey”] fan,” Bret Hutchings, who actually flew a helicopter over the monolith, told CNN.

Clap. Clap. Clap. Thank you, Anonymous Avant Guardian! This pop-up art exhibition is not only indecipherable but, according to officials, also illegal. At the very least, I’d consider it littering.

At first, I thought someone put this out in the middle of the desert (Utah DPS authorities did not disclose the location because they feared anyone seeking it could get lost and require a rescue) and did so recently. 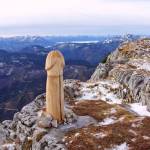 Remember that 6-foot phallus mysteriously erected in the Alps? Yeah, well it never went away — in fact, it's even stranger than it was before. Read more…

But when Redditors narrowed its appearance to 2015-2016, I realized that’s even worse. At least in 2018, when some bandit-artiste hauled a massive statue up a mountain in the Alps without telling anybody, it brought joy to everyone. Yes, that was a humongous wood phallus — and it aroused equal parts speculation and laughter. No one owned up to it, but its location near a ski resort and popular hiking area meant it was bound to be found (and enjoyed).

This, however, brings no laughter, no joy, and were it not for a government-warranted bighorn sheep census — years later, mind you —  nobody would have known! Penis statue: 1, Monolith: 0.

Aliens Put It There

Sure, maybe it was aliens. Maybe an advanced civilization, capable of interplanetary travel (and extremely basic blacksmithing) planted a giant rectangle in Utah.

All of humanity’s collective advancements and contributions toward art, technology, and communication have earned us a spot as the galactic equivalent of a storage locker for a crappy alien wedding present — how profoundly disappointing.

Time Travelers Put It There

Last but not least, humans from the future traveled through time to plant this thing in the here and now. Swell! What, pray tell, are we supposed to do with it? And here’s a thought: Why not leave us something a little less cryptic — something like, I don’t know, a note?

Unless of course — and this is my personal belief — future humans are so overloaded with trash and junk that the best solution we’ve devised is to send it into the past.

And with dwindling modern-day protections for public lands — Bears Ears has already been dismantled and the Arctic National Wildlife Refuge is on the verge of being drilled clean — and the current failures to begin massive conservation efforts both political parties approve of, it makes sense that future us might actually try to put their overflow trash in one of the few remaining un-privatized lots: our public land.

That, or it could be a last-ditch effort to actually preserve what little untouched land we have left — by leaving a mysterious object to study there. After all, no one wants to drill by the venerated monolith!

I suppose that’s one to be hopeful for. It’s not the most likely — probably the least likely. But at this point, in 2020, I’ll take a silver lining — or shiny metal one — wherever I can get it. Even in the middle of the desert.