It’s been a long case of try and try again, but Volkswagen is finally rolling out the long-awaited replacement for its iconic Microbus — though U.S. buyers will have to sit tight, as the new VW ID. Buzz won’t make it to this side of the Atlantic for another year.

Few vehicles have enjoyed as loyal a following as the original Volkswagen Microbus. Used models are still in widespread demand, and that’s been a point of frustration for the German automaker, which has spent decades trying to come up with a suitable replacement for what was officially known as the VW T1.

It finally struck the right chord with the ID. Buzz concept, which made its debut at the 2017 North American International Auto Show in Detroit. The response was overwhelming and, just months later, VW said it would put the all-electric van into production. It’s just taken a bit longer than expected.

The European version, which was formally unveiled today, won’t reach showrooms until late this year. And the American offering will arrive as a 2024 model. 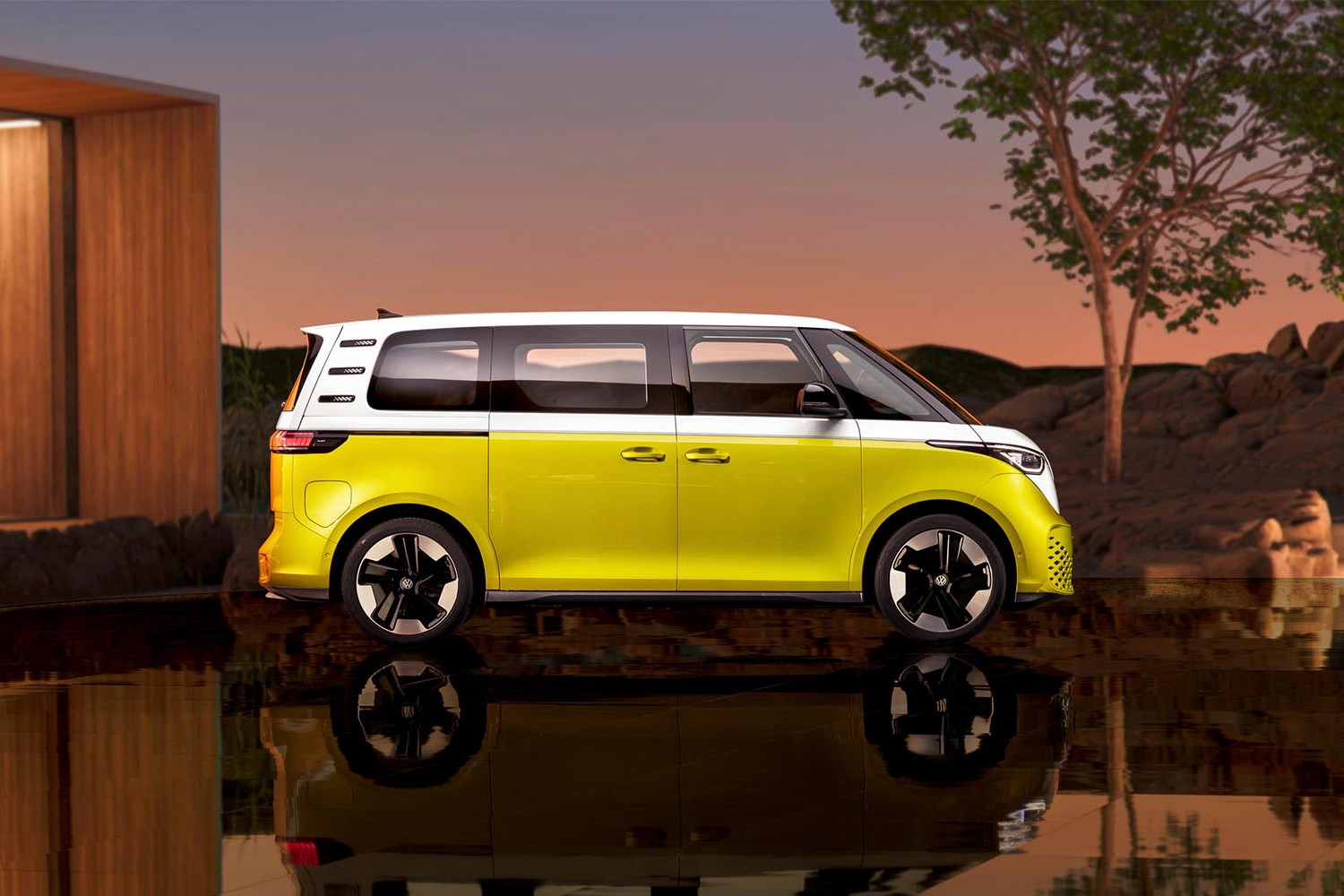 Designers have a knee-jerk reluctance to use the term “retro,” and that includes Volkswagen’s styling boss Jozef Kabaň, who declares, “We very consciously ensured that we were not making another T1.”

Maybe so, but anyone familiar with the original T1 Microbus will recognize the ID. Buzz which, Kabaň acknowledges, “is successfully transferring the genes and stylistic elements of that iconic vehicle into the digital era.”

That starts with the distinctive, V-shaped “hood,” and stubby front end. There is a bit more rake to the windshield, and the overall design is more aerodynamic than the original van, a must to maximize the range and performance of the electric drivetrain.

Added to that are other, more modern details, including the slim LED headlamps, daytime running lights, and large, backlit VW logo on the nose. The van’s horizontal taillights, meanwhile, are linked by an LED light bar.

There will be two versions of the ID. Buzz for Europe and other overseas markets. They feature a 117.6-inch wheelbase and measure 185.5 inches in total length.

The passenger ID. Buzz stands 76.3 inches in height, about 1 mm shorter than the commercial ID. Buzz Cargo model “due to slight differences in the chassis,” VW said in a statement. Both models are 78.1 inches wide.

The five-seat passenger version offers up to 39.6 cubic feet of cargo space. The Cargo model bumps that up to 5.1 cubic yards.

Both of the standard-wheelbase models will come with 18-inch steel wheels, though aluminum alloy wheels ranging from 18 to 21 inches will be available on the passenger model.

VW has yet to reveal the precise dimensions of the American ID. Buzz. But expect it to stretch out by as much as a foot; it will be offered with a seven-seat cabin. The European passenger model will initially offer a five-seat configuration, with a six-seater to follow. 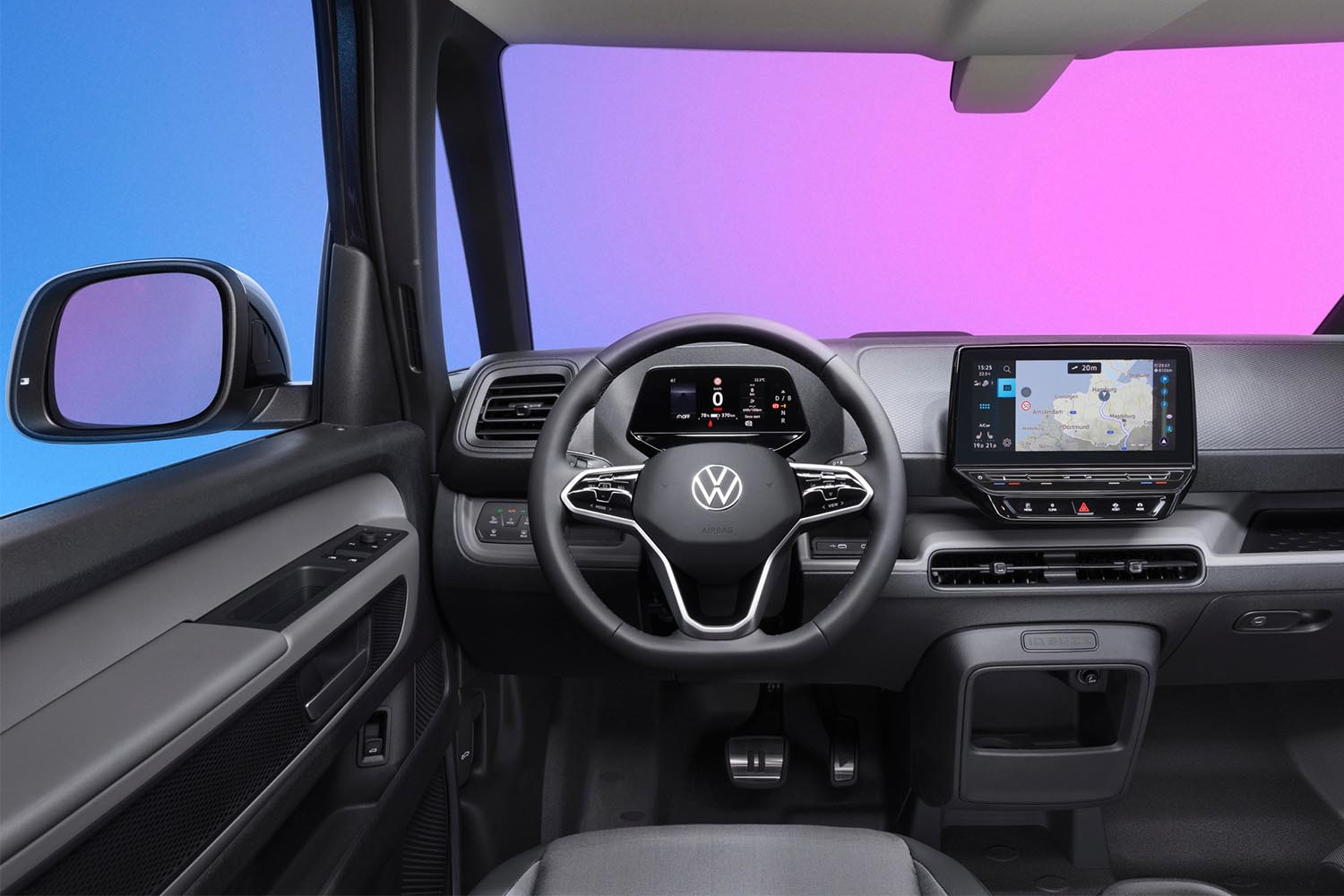 The ID. Buzz cabin is a simpler affair than the original Detroit concept, but it picks up on the high-tech exterior touches. That includes a standard 10-inch digital gauge cluster and a 10-inch infotainment screen that can be upgraded to a 12-inch touch display with onboard navigation.

Key controls, such as volume and climate, are operated by digital buttons and sliders, much like the ID.4 crossover, VW’s first long-range battery-electric vehicle to reach the U.S.

The van also adopts the “ID.Light” found on the ID.4. It’s mounted just behind the windshield and uses colors to signal when there’s an emergency, such as a possible frontal collision. It can also signal when and where to turn when a driver is using onboard navigation.

Don’t be surprised to see VW introduce a variety of different Buzz configurations when it reaches the U.S. market. A California Camper apparently is in the plans, the automaker confirmed last December. Based on earlier images VW has released, a pop-up roof seems to be part of that equation. 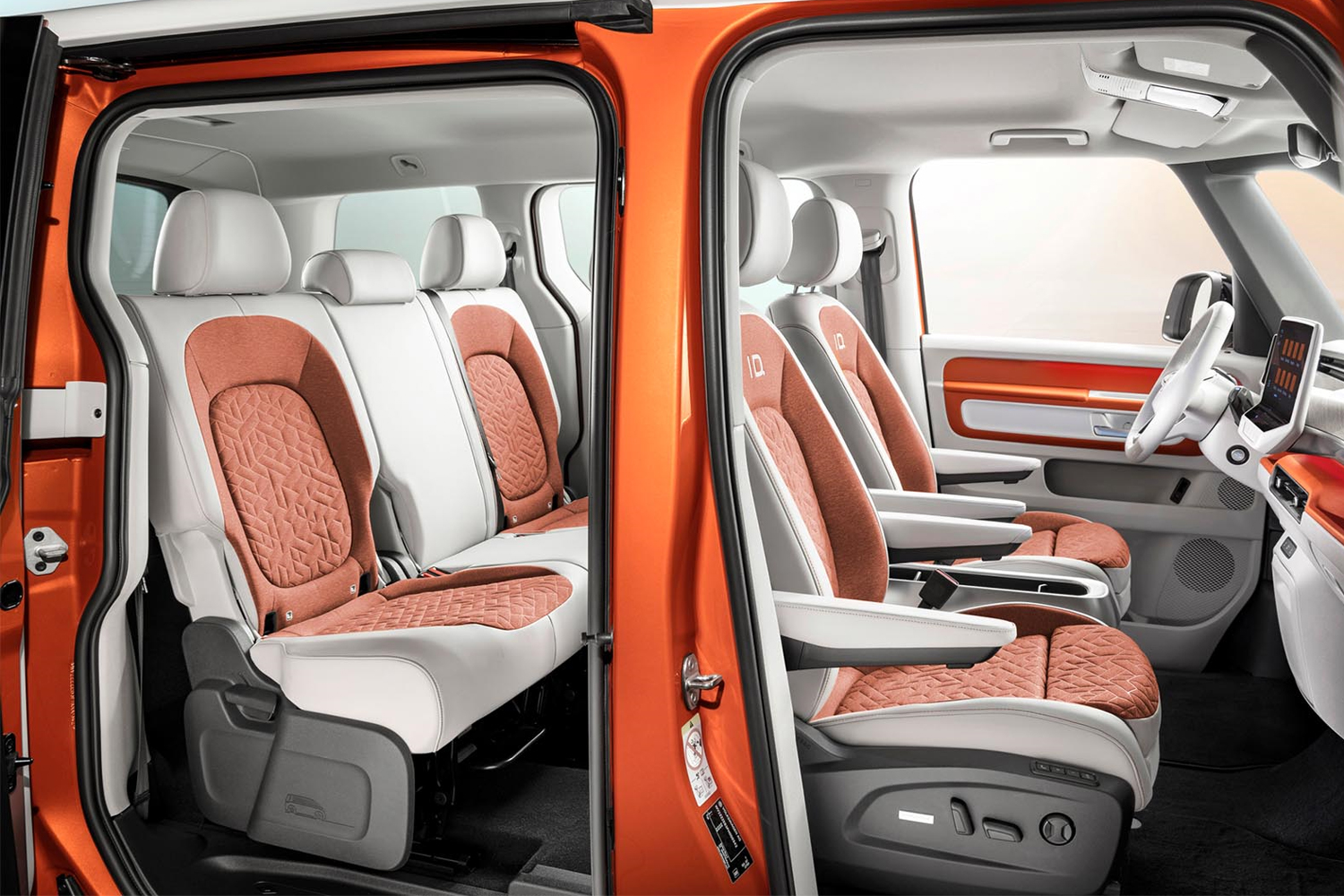 All versions of the ID. Buzz will ride on Volkswagen’s flexible MEB architecture. This is a skateboard-like platform with its key drivetrain components, including the battery pack, mounted below the load floor. That approach lowers the center of gravity while also freeing up space for passengers and cargo.

With the initial short-wheelbase versions of the ID. Buzz and ID. Buzz Cargo, there’s a single electric motor mounted on the rear axle making 201 horsepower and 229 pound-feet of torque. Power comes from an 82-kilowatt-hour lithium-ion battery pack. The automaker says it will release range information “at a later date,” but expect somewhat under 250 miles per charge. 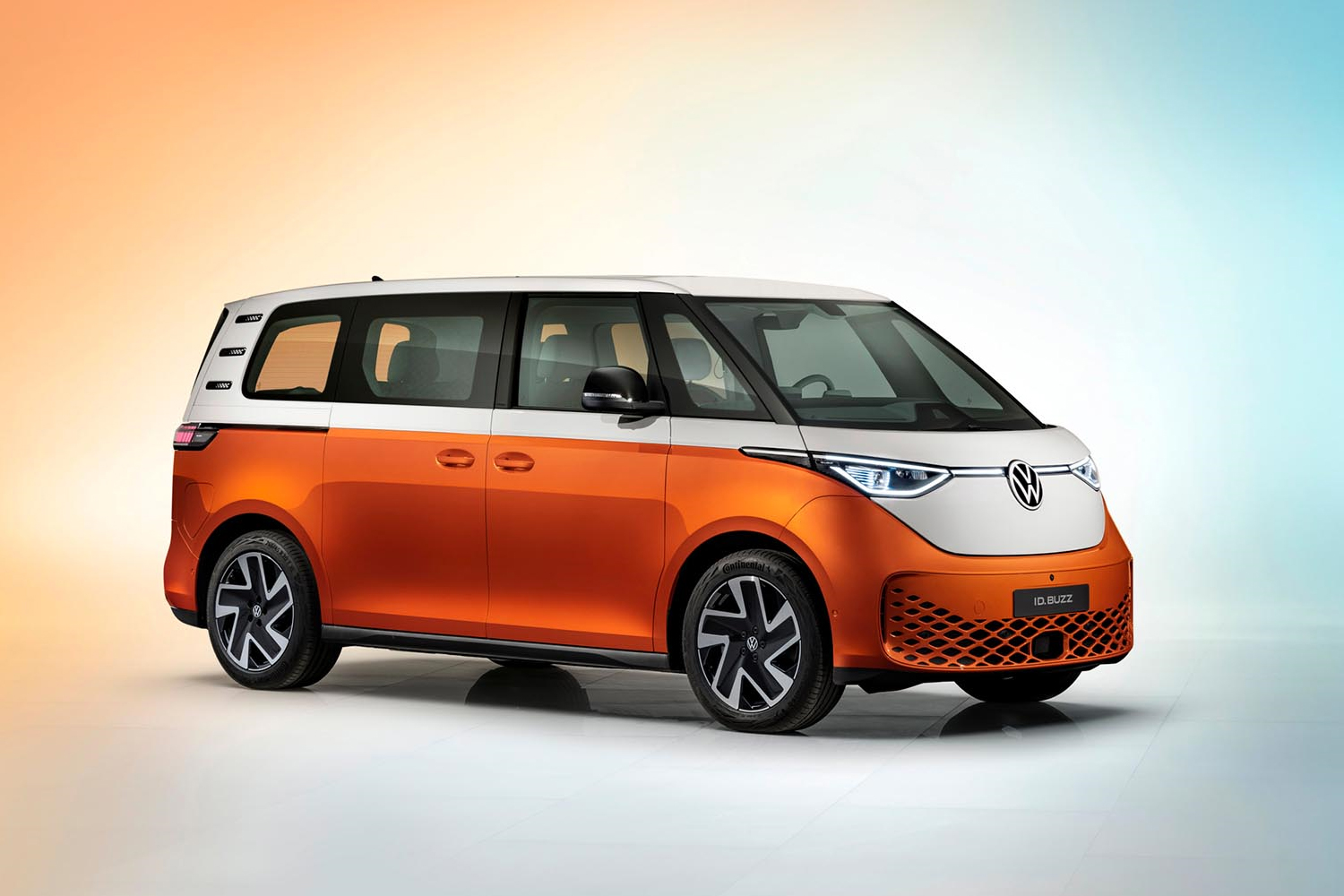 A bigger battery pack is expected for the long-wheelbase version. It may mirror what was in the original concept at 111 kWh. That could boost range closer to 350 miles.

The U.S. version will add a second motor on the front axle. The all-wheel-drive version of the ID.4 bumped horsepower to 295 and torque to 339 pound-feet.

An 11-kilowatt, 240-volt charger is built in, and the ID. Buzz also can handle up to 170 kW of power at a public high-speed charger. Charging times will depend on the final size of the U.S. battery pack. But the 82 kWh pack in the ID.4 can go from 0 to 80% of capacity in about 38 minutes.

No word on ID. Buzz pricing yet, but Volkswagen has signaled that the van could start around $40,000. Then again, considering the current state of the global economy, few would be surprised if the final figure comes in a little bit higher.

Up Next: Shackleton Shipwreck Found! ‘Endurance’ Located After a Century