Five people have been injured by bison this year in Yellowstone National Park. The reason? Smartphones and selfies.

The Washington Post today reported that a mother, taking a selfie with her young daughter and a bison, was tossed in the air when the 2,000-pound animal decided she was too close.

The National Park Service said the mom was six yards away from the enormous, wild animal with her six-year-old daughter.

While this incident is the first of the year in which a selfie was the culprit, two others were due to people getting too close to the bison — to have their picture taken.

On May 16, a Taiwanese exchange student was seriously injured when she turned her back on a Bison that was just three to six feet away.

Although park officials recommend staying at least 25 feet from bison, several people were just 10 feet from the very same bison that attacked the student when officials arrived to help. 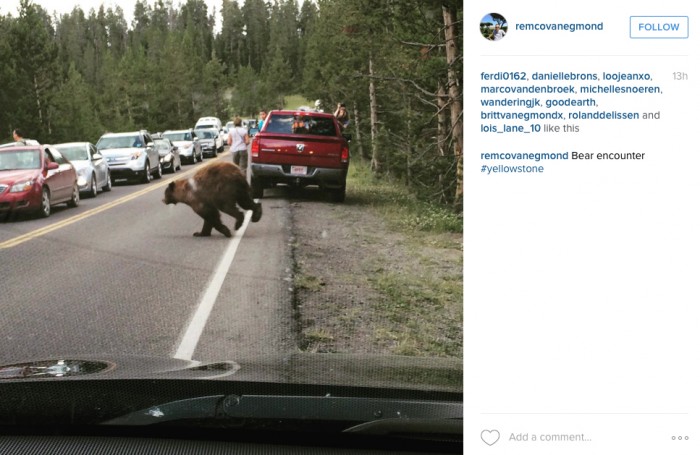 Each year, about 3 million people visit Yellowstone and countless more travel to the wild lands of the United States.

Here’s a quick message for all of them: Don’t mess with the bison!

Bison, bears, heck, even elk, are wild animals and don’t like it when you enter their personal space.

They are big, and strong, and while Disney likes to portray them as friendly and sociable (as well as conversant in English), an unsettled bison can stomp you.

A photo posted by George Dionysios Koutsopoulos (@georgekoutsopoulos) on May 26, 2015 at 10:42am PDT

So, stop with the wild animal selfies. Instead, look at these beautiful creatures with the respect they deserve. Enjoy their presence from a safe distance and admire these creatures that share the Earth.

And instead of a selfie on Facebook ending in a Darwin Award, you will have a genuine story to share, face to face, with friends when you return home.