Known first for its coolers, YETI is growing as a mass-market consumer company. It plans to open stores across America that ‘immerse customers in the brand.’

It’s a humid night in Charleston, S.C. But after a mile-long walk from my hotel, I’m just on time for the store tour. YETI, based in Austin, Texas, today opened its first owned and operated retail location outside of the Lone Star State.

The brand has become ubiquitous in the outdoors and beyond. It now sells water bottles, totes, coolers, packs, and camp chairs at thousands of retail locations in the U.S.

Now YETI enters a new stage with an expansion of its own stores. Beyond Charleston and the Austin flagship store, by the end of this year, the company plans to open Chicago and Denver locations, with more stores likely to come.

The Charleston store, at 360 King Street in the city’s downtown, stocks an impressive display of the company’s offerings in a 5,000-square-foot retail space. But products are, perhaps, a secondary concern for the people behind the scenes.

“We are hoping to immerse customers in the brand,” said Doug Schmidt, director of retail operations for YETI. “This store is about experiences and inspiring people to get outside.”

No doubt, the walls of the Charleston store are covered in photography, maps, paintings, surfboards, and other artifacts of adventure. Fish hang from the ceiling. One wall is adorned with more than 3,000 oyster shells, a nod to the area’s harvestable abundance.

To be sure, there are also rows and rows of double-wall steel bottles, bags, and coolers in almost every shape and color YETI sells. You can grab a hat, shirt, and other YETI swag.

Uniquely, a bar takes up 20 percent of the store’s space. It was built to be a gathering place, Schmidt noted. Locals and tourists in Charleston can plot adventures from high seats where bartenders serve beverages.

To put the brand in the hands of guests, the bar will even use YETI drinkware for the beers and sodas. That will give customers a real-time opportunity to try and buy.

Built over the past few months, the store has a clubhouse feel and is visually inspiring to anyone remotely interested in the outdoors and adventure. The setting, a 100-year-old space on a fashionable street, fits both the brand aesthetic and the requirements for exposure to shopping masses.

I interviewed Schmidt and Leana Shefman, the company’s retail merchandising manager, after the store tour. They divulged YETI’s current objectives within Charleston and hinted at bigger things to come.

My first question — Why Charleston? — was met with conviction concerning a “super-active community already connected with the [YETI] brand” and ambassadors who live in the region. “They are like us,” Shefman said, referring to Charleston’s passionate fishing, water, and outdoor communities, as well as its consanguineous connection to Texas.

Later in the evening, YETI CEO Matt Reintjes got up to speak. He noted a “low-country-meets-Texas” vibe to the Charleston area and talked about fishing and exploring the nearby coastal wilds. He praised Charleston and its people and then nodded at bigger things coming, with the brand “building out globally,” as he put it.

Schmidt filled me in on Chicago and Denver, where YETI plans to open stores as soon as August. Another employee I spoke with was heading to an unnamed city to scout a different store location later this month.

YETI hired Schmidt this year after he served nearly 20 years at REI. He worked as retail director and in a corporate VP role at the Seattle behemoth. YETI is looking to Schmidt to lead a smart rollout toward its national (and, possibly later, international) footprint of cooler-stocked, stoke-filled company stores.

A prominent line item on the company’s Fiscal Year 2018 Financial Results notes substantial spending on “investments in new retail locations and international market expansion.” Shefman and Schmidt would not comment on the bigger plan. “We’ll see how consumers respond to the stores and grow on that direction,” Schmidt offered.

My View From the Charleston YETI Opening Party

From my view, grabbing a made-on-site BBQ sandwich from the bar, it seemed the initial response was solid. People nabbed beers at the opening party and faded toward YETI displays and the experiential interior design.

Live music came from a stage at the front of the store. Films played on a big wall in back, including archived commercials from YETI’s early years, when antics to prove brand durability included a wrestler tossing a cooler off a cliff. 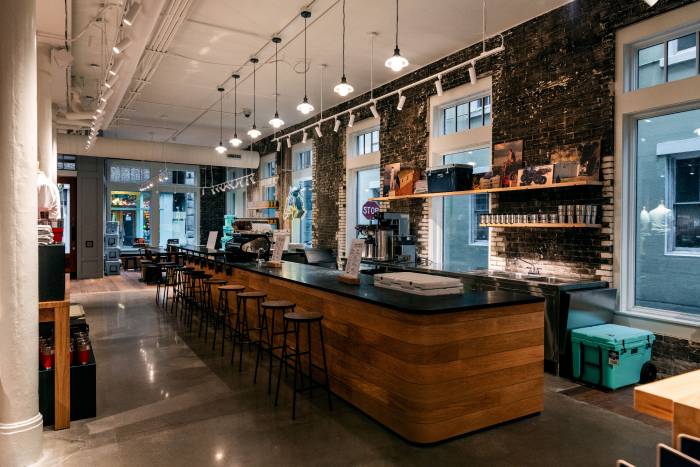 Shefman, a former Nike global retail brand product presentation manager, was point-person on the Charleston store’s look, function, and feel. She had a tight timeline — just 7 months — to work with a team and bring the King Street store to life.

I asked about any template YETI looks at when building its stores. Shefman gently deflected the premise, commenting how YETI is doing its own thing from the ground up.

Motivation and ideas for Shefman come, she said, from the brand’s ethos, its history, and the people who exist in the YETI orbit — product developers, designers, artists, and the company’s many ambassadors who hunt, fish, climb, cook, ride bulls, and otherwise get at life with outsized zeal.

“We are not looking at any one brand to mimic,” Shefman said. “But my test is, are we in touch with the community, are we authentic, and, if any of our ambassadors walk in the front door here, will they be inspired?”

I looked across the space toward a custom cooler station. A painted map of Charleston and its labyrinthine waterways adorned a rear wall. Music and the murmur of a crowd overwhelmed. People gathered in good spirit, and an undeniable vibe of inspiration floated in the air.